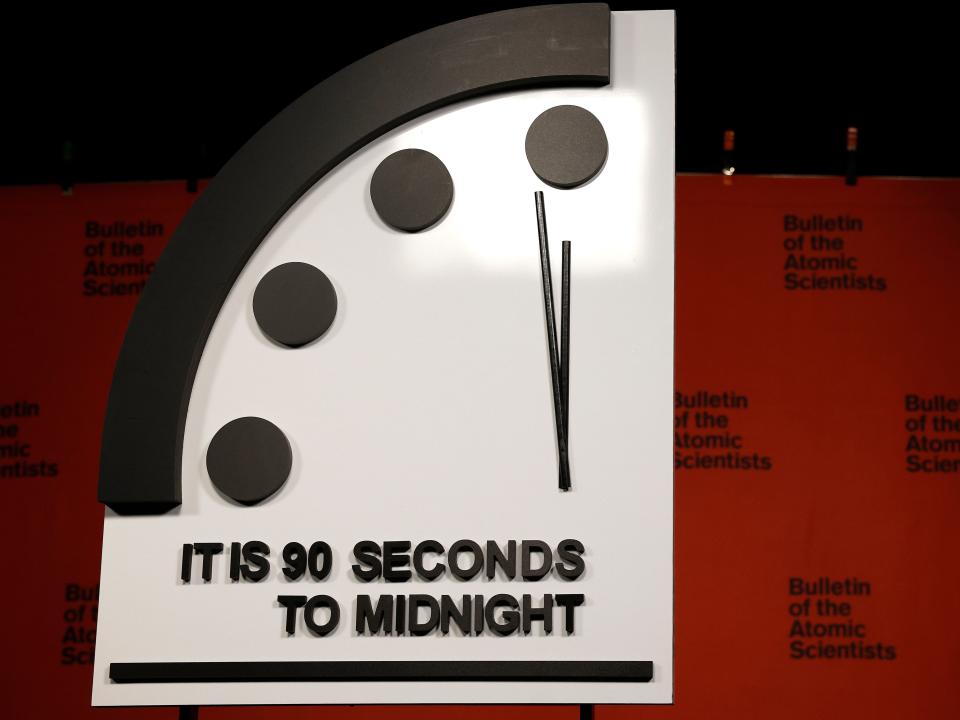 The Doomsday Clock, created 76 years ago by atomic scientists to warn against a human-made apocalypse, has moved to 90 seconds to midnight.

Russia’s ongoing invasion of Ukraine, the climate crisis, and biological threats such as the unchecked spread of COVID-19 were the leading reasons given by the Bulletin of the Atomic Scientists (BAS), a non-profit organization of scientists and policy experts, for setting the hands of the clock closer to human extinction than they have ever been before — including at the height of the Cold War.

For the past three years the clock has been stuck at 100 seconds to midnight, hovering at what was until now the closest-ever point to humanity’s annihilation. Now, “largely, but not exclusively” due to growing risks in the war in Ukraine, it has ticked one step closer.

Related: ‘Nuclear winter’ from a US-Russia conflict would wipe out 63% of the world’s population

“We are living in a time of unprecedented danger, and the Doomsday clock time reflects that reality. 90 seconds to midnight is the closest the clock has ever been set to midnight, and it’s a decision our experts do not take lightly,” Rachel Bronson, the president and CEO of BAS, said at a news conference on Tuesday (Jan. 24). “The US government, its NATO allies and Ukraine have a multitude of channels for dialogue; we urge leaders to explore all of them to their fullest ability to turn back the clock.”

Created for the BAS in 1947 by Martyl Langsdorf (an artist whose husband, Alexander, helped to invent the atomic bomb as a physicist on the Manhattan Project), the Doomsday Clock was first envisioned as a means to plainly signal to the public the dire and growing existential threat posed by nuclear weapons to the world. In 2007, the clock’s countdown was expanded to include all human-made existential threats, burdening its hands with the additional representation of climate change, rogue artificial intelligence, war and global pandemics.

Founded in 1945 by physicists including Albert Einstein and Robert Oppenheimer, who was known as the “father of the atomic bomb”, the BAS’s formation was inspired by that year’s tragic dropping of the U.S. atomic bombs “Little Boy” and “Fat Man” on the Japanese cities of Hiroshima and Nagasaki.

In Hiroshima alone, Little Boy killed an estimated 140,000 people (opens in new tab) within five months of its detonation and destroyed or severely damaged more than 60,000 (opens in new tab) of the city’s approximately 90,000 buildings. The scientists who had worked feverishly during World War II to create the bombs soon became their biggest opponents — arguing, first in an internal newsletter, then in a bi-monthly magazine, that to prevent armageddon, atomic weapons had to be dismantled and nuclear power safely monitored.

To decide the clock’s time each year, the BAS’s Science and Security Board convenes two biannual meetings of 18 experts from backgrounds spanning diplomacy, nuclear science, climate change, disruptive technologies and military history to discuss the changing threats posed to humanity by itself. To assess these dangers, the Science and Security Board’s members consult with colleagues in their respective fields and with the Bulletin’s Board of Sponsors — 11 of whom are Nobel Laureates — before agreeing on the clock’s position.

Healthy vegetation sits next to a field cleared by a fire in the Amazon in Rondonia State, Brazil (Image credit: Leonardo Carrato/Bloomberg) RELATED STORIES—What’s the minimum number of people needed to survive an apocalypse?

The clock’s hands have now moved 10 seconds closer to midnight than ever before. The previous record was set at 100 seconds to midnight between 2019 and 2022 during a backdrop of global political mismanagement in the face of a mounting climate crisis, the COVID-19 pandemic, and the buildup to Russia’s invasion of Ukraine. The clock is currently even closer to midnight than it was throughout the Cold War face-off between the U.S. and the Soviet Union — during which its hands moved to a previous record of 2 minutes to midnight in 1953 after the U.S. successfully tested its first hydrogen bomb.

The clock’s hands have also been set back before, notably to 17 minutes to midnight in 1991 following the collapse of the Soviet Union and the signing of the Strategic Arms Reduction Treaty.

“The Doomsday Clock is sounding an alarm for the whole of humanity. We are on the brink of a precipice. But our leaders are not acting at sufficient speed or scale to secure a peaceful and liveable planet,” Mary Robinson, chair of the human rights organization The Elders and former United Nations High Commissioner for Human Rights, said in a statement. “From cutting carbon emissions to strengthening arms control treaties and investing in pandemic preparedness, we know what needs to be done. The science is clear, but the political will is lacking. This must change in 2023 if we are to avert catastrophe. We are facing multiple, existential crises. Leaders need a crisis mindset.”