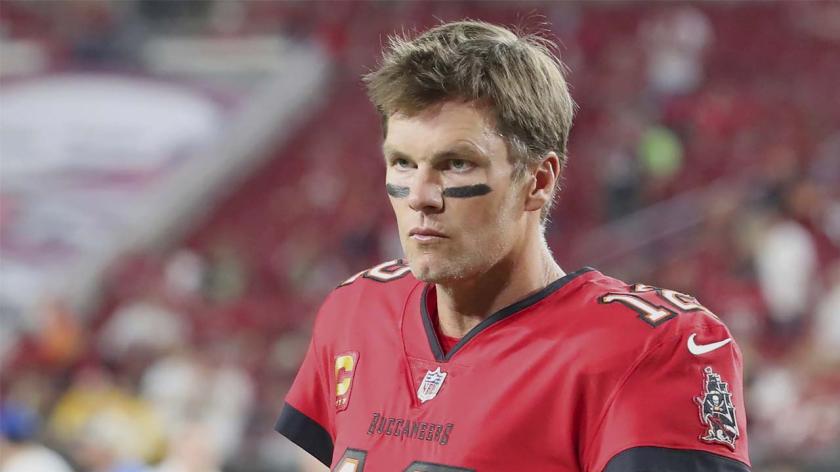 close video FTX collapse one of the ‘great frauds’ and ‘tragedies’ of our time: Thomas Gorman

Tom Brady is being sued by a Patriots fan who says they invested tens of thousands of dollars into now-bankrupt cryptocurrency exchange FTX based on the quarterback's endorsement of the platform.

Michael Livieratos says he transferred $30,000 from a rival crypto exchange to FTX, and has now joined a class action lawsuit seeking damages against a slew of celebrities – including Brady – who were paid spokespeople for FTX before it collapsed, losing billions of dollars in investors' funds.

Tom Brady #12 of the Tampa Bay Buccaneers walks onto the field prior to the game against the Carolina Panthers at Bank of America Stadium on October 23, 2022 in Charlotte, North Carolina. (Grant Halverson/Getty Images / Getty Images)

"As a New England Patriots fan my entire life, you can imagine the influence that Tom Brady would have," Livieratos told The Washington Post.

The lawsuit says Brady and his now ex-wife, supermodel Gisele Bündchen, were "FTX ambassadors" who "joined the company's $20-million ad campaign in 2021," filming a commercial "showing them telling acquaintances to join the FTX platform."

Gisele Bundchen and Tom Brady attend the 2019 Met Gala celebrating “Camp: Notes on Fashion” at The Metropolitan Museum of Art on May 6, 2019 in New York City. ((Photo by Taylor Hill/FilmMagic) / Getty Images)

FTX'S SMALLEST INVESTORS MAY BE BIGGEST LOSERS OF CRYPTO COLLAPSE

The suit describes the well-known celebrities as "all parties who either controlled, promoted, assisted in, and actively participated in FTX Trading and FTX US (collectively, the 'FTX Entities'), offer and sale of unregistered securities in the form of yield-bearing accounts (YBAs) to residents of the United States."

The case is similar to a class action filed in January against celebrities, including reality star Kim Kardashian and boxer Floyd Mayweather, who were paid promoters of Ethereum Max (EMAX) in another alleged crypto scheme.

That lawsuit was thrown out by a judge earlier this month, but Kardashian still paid a $1.26 million fine to the U.S. Securities and Exchange Commission in October for her failure to disclose she was paid $250,000 for a social media post about the EMax tokens.

The first ETF is 30 years old this week. It launched a revolution in low-cost investing
Democrats itch for fight with GOP on expelling lawmakers from committees
UBS trims banker ranks
Davos-launched blockchain project aims to be the SWIFT of stablecoins and CBDCs
Joe Biden Says Saudi Arabia Will Face ‘Consequences For What They’ve Done With Russia’