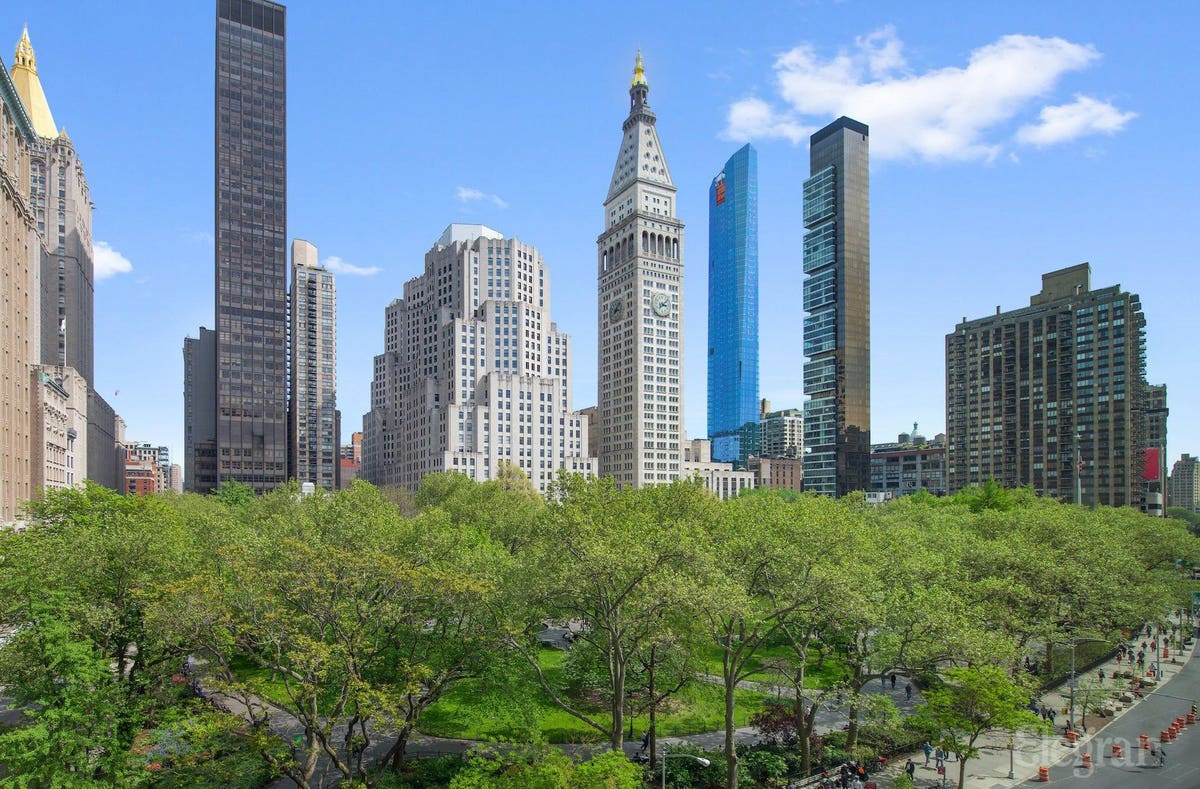 Madison Square Park is one of New York City’s famous parks. Never heard of it? That’s how the locals like it. The square, which played host to magnificent mansions along Fifth Avenue in the mid-19th century, quickly became the heart of one of the city’s exclusive neighborhoods.

Residential spaces in NoMad, which stands for “north of Madison Square Park,” these days are higher than they were two centuries ago. That’s because tall commercial buildings eclipsed the area’s storied estates. The 20-story building at 212 Fifth Avenue, for example, was built in 1913, one of the city’s early skyscrapers. The building’s neo-Gothic facade was carefully preserved and its office space converted into tony residences almost a decade ago.

Now one of the condos is for sale. Residence 6A has three bedrooms and 3.5 bathrooms in 3,008 square feet — and commanding views of the park (52 feet with direct frontage, to be exact). The unit has 11-foot ceilings and king-sized windows with a spacious great room that can be configured into a roomy living room and dining area.

The main bedroom is behind the great room to offer maximum privacy; two others with en suite baths are separated by the hall gallery and kitchen. All full bathrooms have heated stone floors, Carrara marble walls, a stand-alone Lacuna soaking tub and a steam shower.

Details give the residence its luxe feel, such as the book-matched marble foyer and chevron-patterned oak floors. The kitchen features 4-inch thick Calcutta marble countertops and custom ash floors.

The building, designed by Schwartz & Gross, has a facade made of limestone, terra-cotta and brick with neo-Gothic and Romanesque details. It was restored by Helpern Architects, whose website lauds the “rhomboid-shaped, modern steel-frame structure as progressive as any built at that time of exuberant expansion in the city.”

Lifestyle amenities at 212 Fifth include the usual items — 24-hour doorman, concierge, fitness center and lounge — but also a yoga studio with a private treatment room, a golf simulator, screening and game room and cold storage area for fresh food deliveries.

The apartment comes unfurnished, except for window treatments throughout. The selling price is $10.99 million.

Proposal that could help Social Security in debate to raise America’s debt limit
52-foot-long Book of the Dead papyrus from ancient Egypt discovered at Saqqara
Op-ed: Salesforce appoints ValueAct’s Morfit to its board and a proxy fight may loom ahead
Fed can shrink reserves by $2 trillion without missing a beat: Waller
Should You Follow Buffett & Buy Japan ETFs?