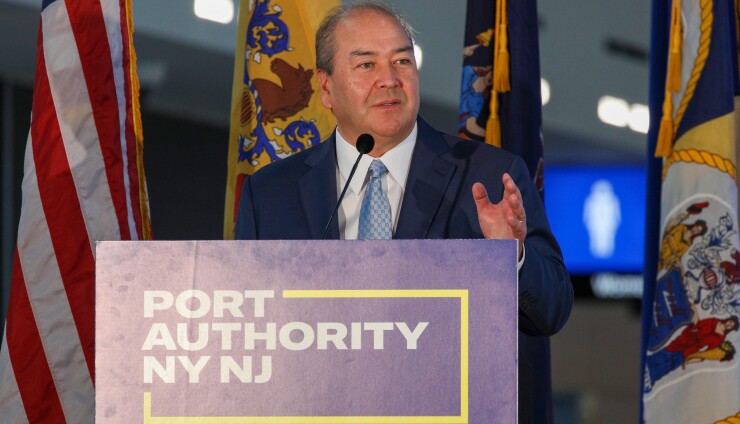 As revenue projections inch toward pre-pandemic norms, the Port Authority of New York and New Jersey plans on more capital spending heading into new year, according to its recently proposed fiscal 2023 budget.

“We are laser-focused on building a future that benefits all users of our facilities and supports the entire region’s economy,” Port Authority Chairman Kevin O’Toole said in a statement last week, “despite the substantial financial hit that our agency took from the COVID-19 pandemic, which continues to affect our facilities in various ways.”

The $8.3 billion budget calls for $400 million more in spending over fiscal 2022, with revenue projections for the upcoming year expected to top $6.4 billion, surpassing for the first time pre-pandemic earning expectations set by the bi-state transportation agency.

The Port Authority, created in 1921, oversees much of the transportation infrastructure in the New York-New Jersey region, including bridges, tunnels, airports and seaports.

The Port Authority’s bottom line is slowly recovering after ridership rates collapsed across its air, rail, and bus networks during the COVID-19 pandemic that resulted in an estimated loss of $3 billion in profits following the lockdown.

Along with dedicating $3.7 billion for operating expenses and $1.2 billion for debt service on its $27.8 billion of outstanding municipal and private debt, the Port Authority budget ups capital expenditures for the first time since 2020, with $2.9 billion, or one-third of the total budget, dedicated for new and ongoing projects across its network under the 2016-2027 capital plan.

The 10-year plan is “substantial in absolute numbers,” and “covers all of their assets, from airports, bridges and tunnels to the PATH train service, seaports, and the bus station in Manhattan,” said Seth Lehman, lead Port Authority analyst for Fitch Ratings, which gave an A-plus rating to the authority’s most recent issuance of $900 million of bonds in May.

In total, the organization has sold $37 billion of bonds under the capital plan, which began in 2017, and officials said this renewed investment in the budget will help put it on track to meet funding obligations missed in the last two years as it overhauls its transportation network ahead of long-predicted hikes in ridership rates.

The $2.9 billion earmarked for projects is a $719 million increase from the fiscal 2022 budget and will be used to “advance the agency’s core transportation mission and invest in projects that rebuild the region’s aging infrastructure with 21st century facilities,” according to the budget proposal.

Of that total, $240 million will go toward tunnels, bridges and roads, including ongoing projects, like the section-by-section replacement of the George Washington Bridge, and new work, such as the planned restoration of legacy bridges. A further $265 million is dedicated to overhauling the PATH system and its payment network.

However, with $664 million in dedicated funds for aviation, the Port Authority’s three major airports are by far the biggest recipients of the renewed capital spending push.

As the airline industry steadily recovers from a 96% drop in domestic air travel rates during the pandemic, the Port Authority has been charging ahead with billions of dollars in spending projects.

The authority expects to fund its capital plan through a mix of private debt, pay-go capital and an expected sale $13.4 billion mix of long- and short-term consolidated bonds as the Port Authority receives “the benefit of the private sector” with the involvement of developers and airlines that have a financial stake in the well-being of the facilities they operate from, Lehman said.

A portion of the $2.9 billion in the 2023 budget will go toward the ongoing renovation of JFK International Airport. A complete replacement of Terminal 1 kicked off in September, with completion expected in 2030 at a cost of $9.5 billion.

That project is funded through private loans, but future phases of construction, including work on terminals 4, 6 and ,8, which will renovate 2.4 million square feet of space and add 23 gates to the airport, will be funded via a public-private partnership agreement inked with state authorities this month.

“JFK International, the nation’s door to the world, will soon be worthy of New Yorkers, providing an unparalleled passenger experience,” New York Gov. Kathy Hochul said in a statement announcing the funding on Nov. 17.

Under the terms of the agreement, the state guarantees billions in developmental financing to the Port Authority through upcoming bond issuances.

“The new Terminal 6 is a public-private partnership between the Port Authority of New York and New Jersey and JFK Millennium Partners — a consortium that includes Vantage Airport Group, an industry investor, developer, and manager of award-winning global airport projects, including LaGuardia Terminal B; American Triple I, a certified minority-owned investor, owner, developer, and manager of infrastructure assets; New York real estate operating company RXR; and JetBlue Airways,” according to a statement.

Newark, New Jersey, is slated to receive $5.3 billion in capital funds that will help with the competition of a $2.7 billion, 33-gate terminal at Newark Liberty International Airport and an associated parking complex that’s slated to open later this year.

After completion of that project, the administration will pause, according to statements, to hire an aviation and architecture design firm to help chart the future course of its piece-by-piece, full-scale modernization.

Both airports are hoping to repeat the success of LaGuardia International Airport, which recently completed a six-year capital-funded renovation.

That $8 billion project included construction of three state-of-the-art terminals, parking accommodations, an open-space concourse and arrival and departure halls. It was completed in February.

LaGuardia’s renovation has been widely touted as a success by state officials after it won a slew of prestigious design awards, including UNESCO’s Prix Versailles Award, which honors “the world’s best contemporary architecture” and pays tribute to “the qualities of innovation; creativity; reflection of local, natural and cultural heritage; and ecological efficiency, as well as the values of social interaction and participation which the United Nations holds in high regard,” according to the French-based award’s website.

As it braces for an expected rise in the rates of public transportation ridership in the metropolitan area, driven by increases in population and the effects of a changing economy, the Port Authority is in better shape than it was two years ago and on the right track in many ways, said Lehman.

With strong reserves, cash flow, and downside agreements with transportation operators, a lot of the Port Authority’s revenue, like rental payments and other fees, are not “as exposed to volumes,” Lehman said,

“Regardless of whether there’s a million more or a million less passengers coming through at any time, [the authority has] some downside protections,” said Lehman. “It was helpful during the pandemic,” when traffic and revenues plunged, he noted.

As the nation continues in uncertain economic waters, that fiscal resiliency may be tested once again.

On Wednesday, the Port Authority released data showing it was the nation’s busiest container port for the third straight month, handling 19% more cargo in October than it moved in pre-pandemic October 2019.

Air passenger volume rose to 98% of October 2019 levels last month as traffic levels at the bridges and tunnels near October 2019 volume while PATH’s ridership last month fell to 55%.

On a month-to-month basis, the volume at the airports increased 4% in October from September, traffic at the bridges and tunnels remained essentially flat and PATH ridership increased 1%.

Cargo activity at the seaport, however, fell almost 6% in October from the prior month as the port’s peak holiday season activity drew to a close.

Almost all products intended for sale during the holiday season have moved through the port already so retailers will have inventory on hand for Black Friday.

The Port Authority of New York & New Jersey has been an active issuer of municipal bonds in the past decade. Since 2012, it has sold almost $24 billion of debt, with the most issuance occurring in 2015 when it offered $3.1 billion of bonds.