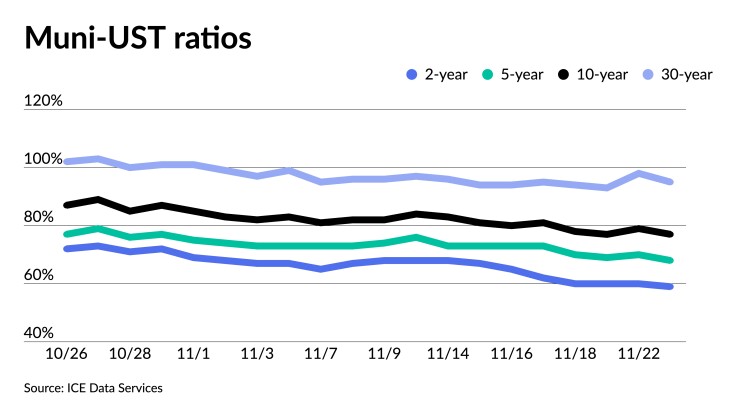 The improved tone continued Wednesday, with triple-A muni yields falling up to nine basis points on the one-year, depending on the curve, while UST saw the largest gains out long, eight basis points lower.

Markets took the news that it will soon be appropriate to increase the Fed funds target rate at a slower pace as good news. Most Federal Reserve officials believe rate hikes will soon slow, according to the minutes of the Nov. 1-2 FOMC meeting.

Some of the participants acknowledged the terminal rate needed to meet the Fed’s dual mandate will be “somewhat higher than they had previously expected.”

“A substantial majority of participants judged that a slowing in the pace of increase would likely soon be appropriate,” the minutes said. By slowing the hikes, many officials felt they’d have time to assess progress, given that monetary policy works with a lag.

“The uncertain lags and magnitudes associated with the effects of monetary policy actions on economic activity and inflation were among the reasons cited regarding why such an assessment was important,” according to the minutes.

In recent appearances, a number of Fed presidents and governors have said the next hike could be 50 basis points, which is what the markets have priced in.

A few officials wanted to see “more concrete signs that inflation pressures were receding significantly” before slowing the pace of hikes.

“Minutes from the Fed’s November meeting underscore the challenges facing the FOMC in properly calibrating monetary policy,” noted Morning Consult Chief Economist John Leer. “To put it bluntly, they don’t know if, how and when their interest rate increases will start to affect the labor market, inflation and overall economic activity. This type of uncertainty increases the likelihood of continuing to raise rates until there’s direct evidence of a slowdown in inflation and employment, which is likely to be too late to achieve a soft landing.”

The Fed is “nowhere near done, even as the committee members consider the possibility of recession, they’re still moving along with aggressive rate hikes and balance sheet reduction,” said Jose Torres, senior economist at Interactive Brokers. “Moving down to 50 basis points increases from 75 may seem like relief; however, 50 basis points is still a lot of tightening when considering what they’ve done already.”

Supply scarcity, UST rally propelling munis
Supply picks up in the week of Nov. 28, but not substantially so, and Connecticut and Massachusetts lead a $4.621 billion post-holiday calendar with $2.867 billion of negotiated deals and $1.754 billion of competitive loans.

Connecticut, tops the negotiated calendar with $900 million of general obligation bonds, $250 million of which are social bonds and $250 million are refundings. The state just saw its rating from S&P Global Ratings boosted to AA-minus from A-plus, with the agency citing improved financials and building of high reserve levels.

“Municipals are being propelled by limited supply conditions but also by a UST rally that is creating more favorable ratios,” said Kim Olsan, senior vice president at FHN Financial. She noted that upcoming December redemptions — expected to total $26 billion — are coming up against about $10 billion of forward 30-day issuance projections.

“Current ratios are below the annual average but absolute yields remain high enough to entice steady flows,” she said.

“Buyers have been forced into narrower spreads — in many cases flat or through implied AAA spot yields on the shorter end of the curve,” she said. Olsan pointed to low AA-rated GOs due out to five years that would normally trade plus-10-15/AAA are trading with single-digit spreads “as demand exceeds available float.”

Olsan noted that a 10-year 3% AA-rated muni “carries a near-5% taxable equivalent yield, while longer-term 4s have held value (despite posting an impressive rally themselves) at discounted yields, equating to TEYs that approach 7%.”

“MSRB data indicate on a rolled up basis the recent rally is creating more net dealer-to-customer sells than dealer buys, albeit on reduced total volume,” she said. The first two weeks of November drew an average daily secondary total of $13 billion, a figure that has declined to $10 billion in the latest week.

Bid tallies via Bloomberg bids wanteds have fallen by 6% in that same period — “a sign that perhaps redemption pressure is easing but also tax swapping that gained favor earlier in the year may be subsiding as well,” Olsan said. Bids wanteds totaled $3.326 billion on Monday and Tuesday.

The rally this month which has taken yields lower by as much as 50 basis points has negated some of the losses booked through October. November returns for the Bloomberg Municipal Index are at positive 3.87% through Tuesday, moving total 2022 losses to 9.49%.

Exchange-traded funds saw large inflows at $2.430 billion after $942 million of inflows the week prior, per ICI data.

The average seven-day simple yield for all tax-free and municipal money-market funds fell to 1.63%,

Taxable money-fund assets saw inflows of $7.22 billion to end the reporting week at $4.46 trillion of total net assets after $7.23 billion of inflows the week prior. The average seven-day simple yield for all taxable reporting funds rose to 3.41%.

The School Board of Sarasota County, Florida, (Aa2///) is set to price $123.465 million of certificates of participation on Tuesday. Raymond James & Associates, Inc.

Competitive:
The commonwealth of Massachusetts (Aa1/AA/AA+/) is set to sell $200 million of general obligation bonds at 10:15 am. Eastern Tuesday. The issuer will also sell $500 million of GOs at 10:30 a.m. Tuesday.

Bitcoin Sellers Exhausted, Accumulators HODL The Line
Pennsylvania Rep. Mike Kelly tapped as top tax writer on Ways and Means panel
Sam Bankman-Fried Bought This Washington DC Townhouse, Now For Sale At Exactly What He Paid For It
Should You Follow Buffett & Buy Japan ETFs?
Eerily perfect galaxy-shaped spiral appears over Hawaii. What is it?