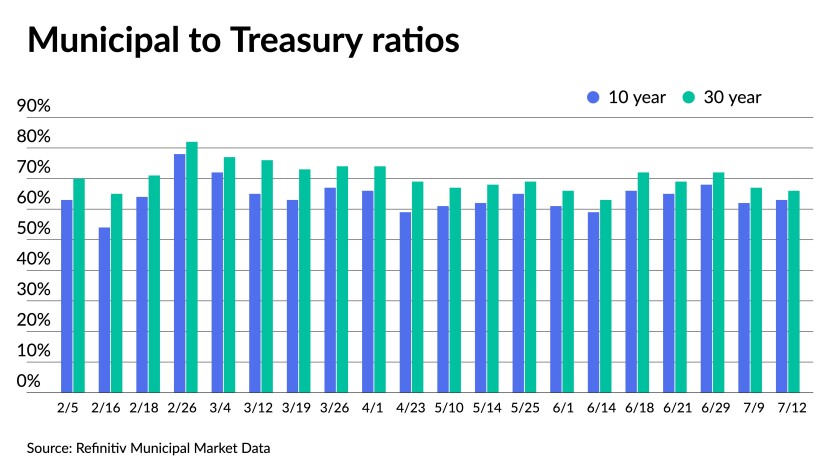 Municipals were little changed with a slightly weaker tone outside of 10 years Monday ahead of a larger and diverse primary as the second week of July reinvestment kicks into gear.

U.S. Treasuries fluctuated but held mostly steady after midday auctions. The 30-year UST sat just at 2% near the close while triple-A municipal benchmark yields were little changed, reflecting that municipals had some catch up to do to taxables last week and investors were content to keep munis steady at Friday’s levels.

Most participants expect better performance for munis in the near-term. Longer-term, a lot depends on rates, COVID and other outside factors, such as infrastructure.

“We thought we were bullish on high-quality tax-exempts, when we expected [municipal-UST ratios] to be in the 70% range — little did we know,” said Barclays strategists Mikhail Foux, Clare Pickering and Mayur Patel in a report on second-half performance. “With ratios reaching 50s-low 60s (levels that have never been reached before), it felt that there was too much emotion in this trade to reach such low levels. The price action in late June 2021 showed some pronounced weakness, and while we can discuss a number of reasons for this, one is simply investor fatigue at such rich levels.”

“At current valuation we see limited upside, and, ratios will end the year higher compared with the current levels, even though we think demand for tax-exempt should remain relatively solid,” they said.

Much depends on interest rates.

They said that because economic recovery is slowing in China, many fear the Delta variant of COVID-19 may further slow China’s progress, which would hurt the global recovery.

“This fear caused the 10-year Treasury yield to decline to 1.25% last week, the lowest since February 2021 as the recovery was emerging,” they said. “We believe fixed income in general should remain well bid until there is more evidence that global economies are recovering.”

Indeed, COVID poses unprecedented challenges to policymakers and it’s still difficult to determine which will be persistent and which will be temporary factors on inflation, Federal Reserve Bank of New York President John Williams said Monday.

“Today, it is still hard to underline what is a persistent factor of inflation and what is temporary, as coming out of COVID is not part of a normal business cycle — too much is happening to identify those types of things,” Williams said at the Bank of Israel/Centre for Economic Policy Research conference on Monday morning. “We just need to be humble, sit back and learn as we go.”

Since high uncertainty remains, Williams suggested the Fed be patient and wait for more data before making any decision on removing accommodation.

Williams said the Fed will deliver 2% inflation, although “it may take time to get there.”

How this affects fixed-income markets broadly and municipals specifically, Barclays said, the road ahead will be more challenging and “much will depend on rates.”

“Rates are always one of the main contributors to muni returns, as well as a driver of muni fund flows,” they said. “The current Treasury outlook could not be more uncertain, due to a combination of strong growth and increased inflation expectations on one hand, and a likely start of tapering in the second half of the year.”

The resurgence of COVID-19 “with new more contagious strains may negatively affect some sectors as well as state and local economies,” Barclays said.

But in terms of supply, Barclays expects “marginally more supply in 2H21 compared with the first half (with a possibility of the upside surprise in 4Q if an infrastructure package is passed and is effective immediately),” they wrote. “However, it will likely be easily absorbed, and demand for munis as well as fund inflows will likely remain solid, although it may decline somewhat from the current pace.

“Tax-exempts will likely outperform our rather subdued expectations for the year (total returns of 0.5% for IG and 4.5% for HY), as returns in the first half of the year have already surpassed these numbers,” Barclays said. “However, as we find current valuations quite rich and challenges abundant, our expectations for the second half remain subdued.”

The Bloomberg Barclays Municipal bond index has returned 1.73% year-to-date, while the high-performing high-yield index is now up to 6.96% YTD and taxables are at 0.99% YTD.

More inflation assessments
“The key to assessing inflation spikes this year is that they are likely not sustainable,” said Steven Oh, global head of credit and fixed income at PineBridge Investments, “so we believe a lower interest rate environment will continue over the long term despite near-term pressure arising from the current supply-demand imbalance.”

The bond market has come around to the Fed’s view that inflation will prove transitory, said Luis Alvarado, investment strategy analyst at Wells Fargo Investment Institute. “The bond markets are now expressing the same view as the Fed and this is being reflected in the decline in Treasury yields over the past month, as the inflation expectations component of yield has come down — however, those views did not agree during Q1 when yields soared from all time low-levels on better growth prospects and higher inflation expectations.”

“Members’ perception of the upside risk to inflation certainly increased” between March and June, he said. “There is still uncertainty (slight differences) around inflation between FOMC participants and Fed staff.”

But the Fed may be floating a trial balloon, said Karissa McDonough, chief fixed income strategist at People’s United Advisors. The Fed’s message had been consistent “until June’s surprise dot plots that were seemingly at odds with previous messaging about the timing of the first hike not until 2023 — the timing appeared to be pulled forward by a whole year!”

The purpose, she said, is to alert the market “we’re nearing the end of the extremely accommodative policy” that was needed as a result of the COVID crisis. “The inconsistent and sometimes contradictory messaging is probably on purpose to allow the idea of a taper of bond purchases and rate hikes happening relatively soon to be slowly accepted by the bond market — and this time it appears that it is working — no tantrum has been in evidence — we already had the significant backup in rates from under 1% to 1.75% in 1Q.”

According to the June survey, median one-year inflation expectations rose to 4.8%, the highest it’s been, from 4.0% in the prior, while three-year expectations held at 3.6%.

Inflation uncertainty rose at the one-year mark and were unchanged at three years, but both “are elevated relative to pre-COVID-19 as well as their 2020 readings,” the report said.

The Rector and Visitors of the University of Virginia (Aaa/AAA/AAA/) is set to price on Wednesday $300 million of taxable general revenue pledge refunding bonds, term 2051. Barclays Capital Inc.

The Rector and Visitors of the University of Virginia (Aaa/AAA/AAA/) is also set to price on Tuesday $100 million of general revenue pledge bonds, Series 2021A. Goldman Sachs & Co. LLC.

The California Health Facilities Financing Authority (/AA-/AA-/) on Tuesday is set to price $170 million of Children’s Hospital of Orange County revenue and refunding revenue bonds, $88.7 million of Series 2021A and $81.3 million of refunding Series 2021B. Morgan Stanley & Co. LLC.

In the competitive market, Colorado is set to sell $370 million of educational loan program tax anticipation notes, maturing 6/29/2022, at 11 a.m. eastern on Tuesday.

On Thursday, Memphis, Tennessee, is set to sell $160 million of general improvement refunding bonds at 10:30 a.m.