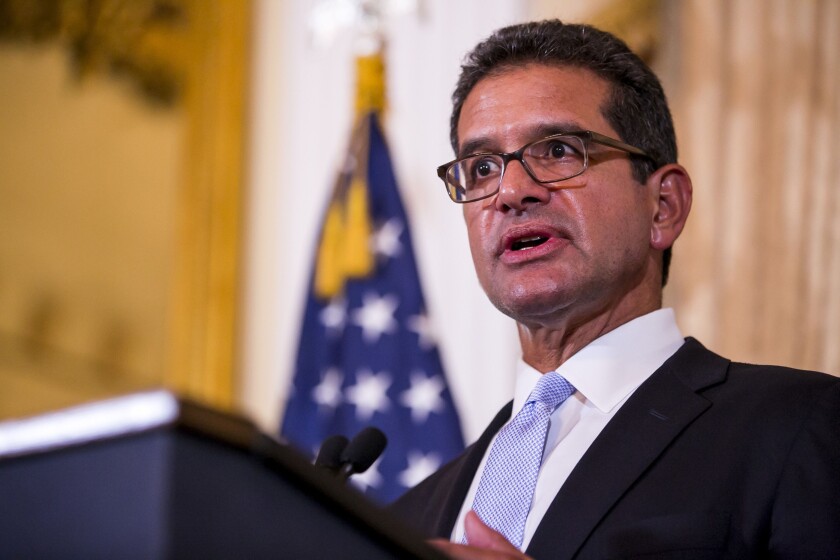 Observers say the move is political and unlikely to help parties come to consensus over the pension issues, and further complicates getting the Plan of Adjustment done. The confict is flaring up ahead of a hearing on the Disclosure Statement set for Tuesdsay.

The governor proposed two measures as an alternative to Law 7-2021, over which the Puerto Rico Oversight and Management Board, created by the 2016 law that set terms for Puerto Rico’s debt restructing process, sued Pierluisi and the legislature a week ago.

“That the Board insists on its part in the cuts to pensions and in not providing a fair retirement, the only thing it will lead to is a deadlock in the restructuring, which we all want, of the debt,” Pierluisi said in a statement. “On the other hand, my exhortation to the entire community of public servants in Puerto Rico is that these alternatives that I present today are much better than what the Board proposes and is a realistic solution to the bankruptcy of the government.”

An Oversight Board spokesman said the board is reviewing the proposals and had no further comment Friday.

The first bill Pierluisi proposed, titled Zero Cut to Pensions, would not allow pensions to be diminished through the Plan of Adjustment in Title III and proposes instead to address any changes through the budget process and the fiscal plan established by Title II of Puerto Rico Oversight, Management and Economic Stability Act (PROMESA).

To do that, Pierluisi proposes to amend Law No. 147 of 1980 to establish the payment of public pensions will have priority over other disbursements of public funds, when the available resources are insufficient for the budgeted allocations for that year. It would have a fiscal impact of $1.5 billion for the next 20 years.

The governor’s second measure proposes to bring back defined benefit plans that were axed in 2018, putting current employees — about 38,000 of them — back into a defined benefit system. Existing retirees went into the pay-as-you-go system.

The proposed “Law to Guarantee the Right to a Fair Pension” says that those employees who have entered the pension system in accordance with Law 447 of 1951 and the Act No. 1 of 1990 have the right to the payment of a pension equivalent to 50% of their salary when they retire from public service.

The measure establishes that these pensions would continue to be paid through the pay-as-you-go mechanism established in Law 106-2017.

The two measures in response to the board’s suit against the law that Gov. Pedro Pierluisi signed on June 7, Act 7-2021, have a long way from being considered.

Act 7-2021 bars the government from supporting the proposed Plan of Adjustment, any cuts to pensions or “essential services,” or any fee increases or tax increases to support paying debt.

Commentators quickly noted that the Board’s July suit likely would have strong legal standing because the act, according to the suit, “purports to dictate the terms of a new plan of adjustment, contrary to the Oversight Board’s currently proposed plan of adjustment. The act would: (i) create new categories of ‘Uncontested Bonds’ and ‘Contested Bonds’; (ii) provide no recovery to the latter; (iii) cap recoveries for the former at an aggregate maximum of 58%; and (iv) leave retirement claims unimpaired.”

The law would mandate $4.5 billion from government accounts be transferred to a newly created pension trust, which is not part of the Financial Oversight and Management Board’s current fiscal plan.

“What Pierluisi is doing is accelerating the conflict between the FOMB plan and post-FOMB operations, which is inevitable,” said Municipal Market Analytics Partner Matt Fabian.

“It’s good for all sides to understand and navigate these issues now and not be surprised when, once the FOMB departs, the Commonwealth begins making adjustments on its own,” he said, adding that this is the FOMB’s problem.

MMA noted in a June 28 Outlook report that although the Oversight Board intends to complete the restructuring of the commonwealth’s GO and related bonds this year, and although the board and commonwealth have been working together for five years, “the two parties continue to disagree over material components of the budget, fiscal plan, and plan of adjustment. Including, for example, benefit cuts to pensioners, labor rules, the disposition of PREPA’s partial privatization, levels of regular operational spending and local government support, programming of capital expenditures, and similar.”

Under PROMESA, the FOMB generally controls outcomes, but the government will ultimately need to approve any debt restructurings. Without the support of the legislature, which Pierluisi does not have, he cannot enact any changes, an underlying problem with the proposals he presented Thursday.

It also brings up the question again of whether the legislature will derail the plan of adjustment, heavy on the minds of several participants. Most observers do not think the legislature will repeal Law 7-2021 and Pierluisi has made clear with Thursday’s moves that he does not support that either.

The Puerto Rico Senate, House of Representatives, and governor have passed and signed into law a bill saying the government will not enact legislation approving any new bond issuance if the Plan of Adjustment impairs retiree pensions. In mid-June the Puerto Rico Fiscal Agency and Financial Advisory Authority restated the position in a filing in the Title III bankruptcy.

“The elephant in the room is that the legislature, after five years of negotiations, could simply not create any laws that would comply with the Plan of Adjustment and all of this has been for nothing,” said a lawyer who is not involved with the negotiations but asked for anonymity. “The court cannot legislate and Title III could just be dismissed.”

Pierluisi sent a letter to lawmakers and the members of the Oversight Board and its executive director Natalie Jaresko, in which he notifies them of these alternative measures to Law 7-2021 and asks them to “evaluate them objectively to achieve an agreement that is fiscally responsible and that protects the pensioners of the government of Puerto Rico.”

Bankruptcy Judge Laura Taylor Swain had said she would not submit a Disclosure Statement until parties made a sincere effort to compromise but a hearing on the Disclosure Statement is scheduled for 9:30 a.m. on Tuesday. The current board plan of adjustment addresses the central government’s $35.4 billion in debt. The board filed a fourth amended version of this proposed plan on June 29 in the U.S. District Court for Puerto Rico.

“The FOMB has not yet demonstrated an ability to advance a politically sustainable plan that would reasonably survive the eventual transfer of power,” Fabian wrote, adding that is the bigger risk to Puerto Rico’s credit profile in the long-term. “Until that’s the case, investors should consider an even higher degree of outcome uncertainty for PR bonds than implied by current prices.”

Should You Follow Buffett & Buy Japan ETFs?
Israel’s Supreme Court Chaos: An Issue US Christians Should Care About?
Ex-Psychic’s Alarming Warning to Parents About Witchcraft, Evil, and the Occult: Shows How Deceptive the Devil Is
A job-destroying economic vortex has just been unleashed: Large-scale layoffs will accelerate through 2023, impoverishing millions
Musk meets with McCarthy, Jeffries to ensure Twitter is ‘fair’