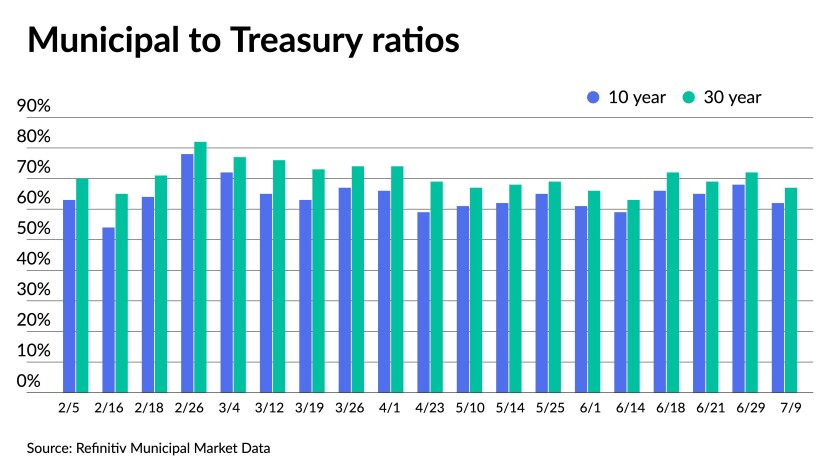 U.S. Treasuries pared back gains with yields rising by four to six basis points Friday and stocks rallied to record highs as investors’ concerns over a lull in the economic recovery quieted. Municipal bonds did as they often do on a summer Friday — stayed on the sidelines and awaited the coming week’s larger new-issue calendar.

Triple-A benchmarks were little changed Friday while investors will see $10 billion of supply, the largest calendar since the week of June 14 ($11 billion), according to The Bond Buyer, Ipreo and Refinitiv data. Tax-exempts are $7.44 billion while taxables make up $2.68 billion.

Leading the calendar is $832 million of forward delivery bonds from the Metropolitan Pier & Expo Authority, Illinois, (/BBB+/BB+/AA-/) and the New York City Transitional Finance Authority (Aa3/AA/AA/) with $589.1 million of exempt building aid revenue refunding bonds in a negotiated deal and $210 million of taxable BARBs in the competitive market Wednesday.

Thirty-day visible supply is at $13.73 billion, according to The Bond Buyer data.

The diversity of credits should give investors much to work with for reinvestment needs. Net negative supply is at -$12.3 billion, per Bloomberg data.

Municipal-to-UST ratios were lower, reflecting the movement in Treasuries. They were at 62% in 10 years and 67% in 30 on Friday, according to Refinitiv MMD. ICE Data Services had the 10-year muni-to-Treasury ratio at 63% and the 30-year at 68%.

While municipals hit the pause button Friday, the movement in yields mark the largest one-week decline in 2021 at 12 and 14 basis points in 10 and 30 years, respectively, according to Refinitiv MMD. ICE Data Services, IHS Markit and Bloomberg BVAL benchmark yields also marked the largest drops of 2021.

Participants don’t see yields reaching the highs touched in the first half of the year.

Muni indexes are on track to achieve or exceed BofA’s total return targets.

“In particular, we reiterate our view that the taxable muni index (TXMB) should return 5% for the year,” wrote Yingchen Li and Ian Rogow, municipal strategists at BofA.

One noticeable byproduct of the week’s rally is the spread compression between AAA and AA revenue names — where in many cases on the shorter end of the curve the AA bond is trading nearly on top of AAA names, noted FHN Financial’s Kim Olsan.

The spread between ICE Data Service’s AAA and AA scales is six basis points, seven basis points and 13 basis points on the 5-, 10- and 30-year maturities, respectively.

The Bloomberg Barclays Municipal bond index has returned 1.73% year-to-date, with the best performance continuing to be out long, while the high-performing high-yield index is now up to 6.98% YTD and taxables are up 1.64% YTD.

The report offered little new information, pretty much echoing what Federal Reserve Board Chairman Jerome Powell has been saying for months.

Powell will deliver the report and take questions from the House Financial Services Committee on Wednesday and the Senate Banking Committee on Thursday.

Keeping rates at the zero lower bound, buying $120 billion of Treasury securities and agency mortgage-backed securities a month and its forward guidance “will help ensure that monetary policy continues to deliver powerful support to the economy until the recovery is complete,” the report said, suggesting tapering is not on the table soon.

The Federal Open Market Committee expects to keep its asset buys at the current rate, the report said, “until substantial further progress has been made toward its maximum-employment and price-stability goals,” with the panel assessing progress toward its dual mandate at each meeting. Again, a phrase used often by Powell.

The recently released minutes from its past meeting showed while the belief of the panel, in general, was conditions for taper were not yet met, some participants see tapering occurring “somewhat earlier than they had anticipated at previous meetings.”

As for the economy, “shortages of material inputs and difficulties in hiring have held down activity in a number of industries,” the report said. “In part because of these bottlenecks and other largely transitory factors, PCE (personal consumption expenditures) prices rose 3.9% over the 12 months ending in May.”

It is “uncertain” when these bottlenecks will ease “as they reflect both the global supply chain and some industry-specific reasons for the tight conditions,” the report says. But, once these issues are resolved, “production is expected to pick up and price pressures to ease,” noting that is already the case with lumber prices.

But despite these issues, and a rise in of longer-term inflation expectations, the Fed sees inflation as transitory and “in a range that is broadly consistent with the FOMC’s longer-run inflation objective.”

But, the report notes, should this year’s “sharp rise in inflation … be followed by a period of higher inflation pressures,” it could “call for a change in the stance of monetary policy.”

The labor market has improved rapidly, but the unemployment rate remains elevated and the labor force participation rate “has not moved up from the low rates that have prevailed for much of the past year,” the report said.

Among the issues for labor force participation rate remaining low include school closures that have forced workers into caregiving, fear of contracting COVID-19 in the workplace and extra unemployment insurance benefits. These factors should ease in the next few months, the report says. But the Fed remains concerned about potential structural changes including accelerated retirements.

“The Fed’s focus on potential longer lasting impacts of the pandemic on the structure of the labor market, including accelerated retirement (which could suggest a more persistent drag on the labor force) and accelerated adoption of technology by firms (which suggests potential for a slower employment recovery, and potential for longer term scarring),” was interesting, said Wilmington Trust Senior Economist Rhea Thomas.

If retirement continues to be a viable option for older workers, who would have worked longer under other conditions, she said, there’s a chance for a near-term increase in wages.

Even without the pandemic, retirement of Baby Boomers would have lifted the number out of the workforce by 0.3-percentage points, the report said.

But, Thomas added, firms turning to technology to offset “labor shortages suggests longer term downside pressures for both wages and inflation, as it increases productivity by allowing firms to produce more with fewer workers and reduces costs.”

Despite being mentioned only briefly in the report, Thomas said, “this is a factor that we believe is a key trend to watch, as it could suggest a slower recovery of full employment.”

Firms turning to technology is one reason Wilmington sees inflation as transitory.

Separately, wholesale inventories grew 1.3% in May, following an unrevised 1.1% gain in April.

The Rector and Visitors of the University of Virginia (Aaa/AAA/AAA/) is set to price on Wednesday $300 million of taxable general revenue pledge refunding bonds, term 2051. Barclays Capital Inc.

The Rector and Visitors of the University of Virginia (Aaa/AAA/AAA/) is also set to price on Tuesday $100 million of general revenue pledge bonds, Series 2021A. Goldman Sachs & Co. LLC.

The California Health Facilities Financing Authority (/AA-/AA-/) on Tuesday is set to price $170 million of Children’s Hospital of Orange County revenue and refunding revenue bonds, $88.7 million of Series 2021A and $81.3 million of refunding Series 2021B. Morgan Stanley & Co. LLC.

In the competitive market, Colorado is set to sell $370 million of educational loan program tax anticipation notes, maturing 6/29/2022, at 11 a.m. eastern on Tuesday.

On Thursday, Memphis, Tennessee, is set to sell $160 million of general improvement refunding bonds at 10:30 a.m.

92% of millennial homebuyers say inflation has impacted their purchase plans, but most are plowing ahead anyway, study shows
Unspoilt Acreage In Montana’s Big Sky Country Hits The Market For $14 Million
NYC’s homeless are filling JFK Airport
Puerto Rico approves Genera PR for electricity generation
Trump Will Run For Office In 2024 But May Not Stay In The Whole Time, Says Book Author: ‘He’s Backed Himself Into A Corner’