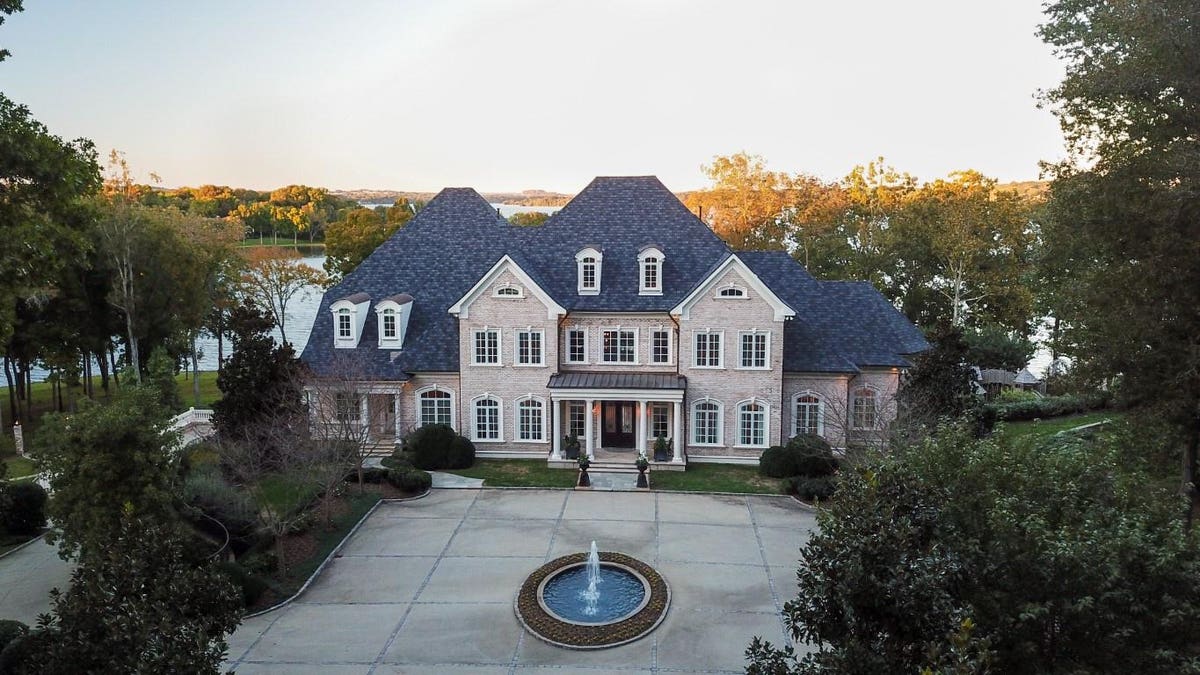 It may have taken four years, but Kelly Clarkson has finally sold her lakefront megamansion in Hendersonville, Tennessee for $6.3 million. The original listing price was $8.75 million in 2017 with the most recent reduction early this year to $7.49 million.

The singer, songwriter and talk-show host still raked in a profit, as she bought the property for $2.8 million in 2013.

Not only is the house stunning, but its setting is the star of the show. Situated on the banks of Old Hickory Lake, 25 miles up the Cumberland River from Nashville, the water views beyond the 4 acres of lawn are extraordinary.

A long gated driveway leads to the entrance motor court with center fountain. Grounds are dotted with mature trees, lots of emerald lawn, a sand volleyball court, English-style gardens, a conservatory/greenhouse and a large pool terrace with pavilion for outdoor dining with a fireplace, all accessed via a double-sided curved staircase descending from the upper terrace. There is also a two-boat covered boathouse.

The neighborhoods surrounding Old Hickory Lake have drawn many Nashville stars over the years, including Taylor Swift, Johnny and June Carter Cash, Conway Twitty, Ricky Scaggs and Loretta Lynn. It has long been a recreational spot for the country performers where tour schedules and other pressures evaporate with fishing, boating, and dining at the marina restaurant.

The 20,121-square-foot house has plenty of space for family, friends and overnight guests, according to toptenrealestatedeals.com. The home’s entrance opens to a grand foyer with soaring double staircases, and the heart of the home is filled with family warmth and fun for casual entertaining, particularly the cowboy bar with its saddle-seat bar stools.

Included are seven bedrooms, one of which is a large master suite with seating area in front of a fireplace and luxurious master bath, eight full bathrooms and three half bathrooms, a family room, movie theater and a children’s room with four built-in bunk beds and good-sized play area. There is also a billiard/game room, additional living/family rooms, large gym, a two-level office and an elevator.

Over the last year, Clarkson has experienced both highs and lows: the low being her ongoing divorce, now a year old, from her husband of seven years, Brandon Blackstock. The high is over the top with her Emmy-winning TV talk show, The Kelly Clarkson Show, which will be taking over The Ellen DeGeneres Show time slot following its 19th and final season next year. The Voice coach also just shelled out $5.445 million on a Colonial-style home in Los Angeles.

Biden has work to do with State of the Union
Here’s what the Federal Reserve’s 25 basis point interest rate hike means for your money
Government Keeps Meddling With Private Company Decisions
Survey says: 2023 issuance will be the same; rates will rise
If You Invested $100 In Shiba Inu When The Coin Launched, Here’s How Much You’d Have Now