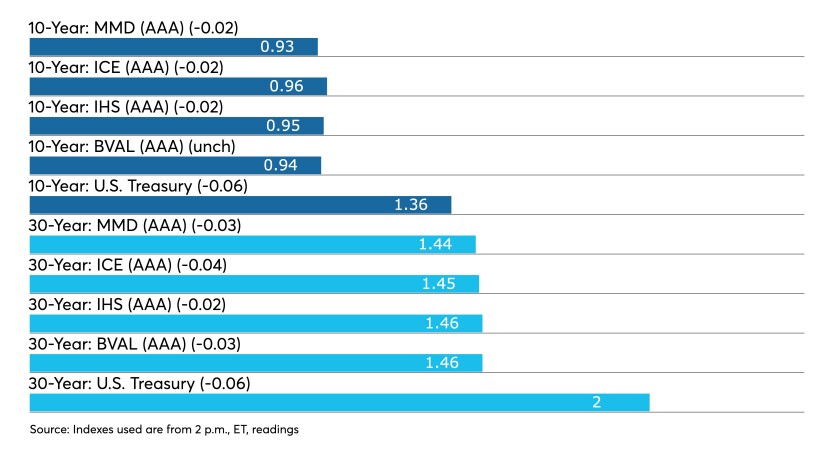 Municipals were better on light but strong trading in the secondary, as dealers pushed benchmarks lower with large blocks of high-grades exchanging hands but sales to customers also showed strong interest.

Triple-A benchmarks fell two to four basis points as a result with the 10-year municipal now well below the 1% mark, with Refinitiv MMD the lowest at 0.93%.

Heavier trading in the belly of the curve showed where opportunity might live for buyers. Secondary trading showed as much on Tuesday.

“After last week, the municipal yield curve is more uniformly valued,” according to a Municipal Market Analytics Outlook report, which added, “things may be a bit more appealing at the very center (11-13 years) where more pressure on sellers is evident.”

The light primary gets underway Wednesday, led by a competitive deal from the Collier County, Florida, Water and Sewer District (//AAA/), set to sell $137.69 million of water and sewer revenue bonds at 11 a.m. eastern. The other sizable deals are set for Thursday.

NYS, NYC to sell $6.75B of bonds in Q3
New York State, New York City and their public authorities plan to sell about $6.75 billion of bonds in the third quarter of 2021, state Comptroller Thomas DiNapoli said Tuesday.

The planned sales include $4.25 billion of new money and $2.5 billion of refundings and reofferings.

Economy
Strength in the service sector, despite price pressures and a dip in unemployment, suggests tapering can wait until early next year, one analyst said.

“The U.S. service sector is still strong and while pricing pressures remain, this report does not provide any new signals that support the argument that tapering should happen sooner than early next year,” according to Ed Moya, senior market analyst for the Americas at OANDA.

The Institute for Supply Management’s services PMI dipped to 60.1% in June from a record-high 64.0% in May.

Economists polled by IFR Markets expected a reading of 63.5%.

The business activity/production index fell to 60.4% from 66.2% the prior month.

The dip adds credence to “the inflation is transitory argument,” Moya added.

The gain “suggests that strong job growth will continue through the summer,” said Gad Levanon, head of The Conference Board’s Labor Markets Institute. The labor market should “remain very tight” this summer, he said. “Recruiting and retention will remain extremely difficult, and wage growth will remain very high.”

Supply issues should ease by year end, he said, and the unemployment rate could decline to under 4% by this time next year. “A tight labor market is likely to be the new normal until the next recession.”

BCA Research, in a report, expects the labor market recovery to expand in September.

Treasury yields fell on Friday despite a strong employment report headline number, BCA said. “We see the bond market as overly complacent in the face of what is shaping up to be a rapid labor market recovery that will only accelerate once schools reopen and expanded unemployment benefits lapse in September.”

While Friday’s report wasn’t so strong to “derail the Fed’s stance,” Sebastien Galy, senior macro strategist at Nordea Asset Management, said, “The Federal Reserve is likely far behind the curve given the fact that monetary policy takes six to eighteen months to have an impact and the need for robust measures during COVID-19. The slower it is to tighten, the stronger will be the eventual pace of tightening.”

Primary market to come
The Trustees of the California State University (Aa2/AA-//) is set to price $1.882 billion of taxable and tax-exempt systemwide revenue bonds on Thursday. J.P. Morgan Securities LLC will run the books.

In the competitive markets, the Collier County, Florida, Water and Sewer District (//AAA/) is set to sell $137.69 million of water and sewer revenue bonds at 11 a.m. eastern on Wednesday.

Chip Barnett contributed to this report.

Silvergate Capital shares jump after BlackRock reports increased stake in the crypto bank
Man wanted for throwing Molotov cocktail at New Jersey synagogue
Top Stock Picks for Week of January 3, 2022
Top Wall Street analysts like these stocks for maximum returns
Abortion Pills Will Be the Next Battle in the 2024 Election