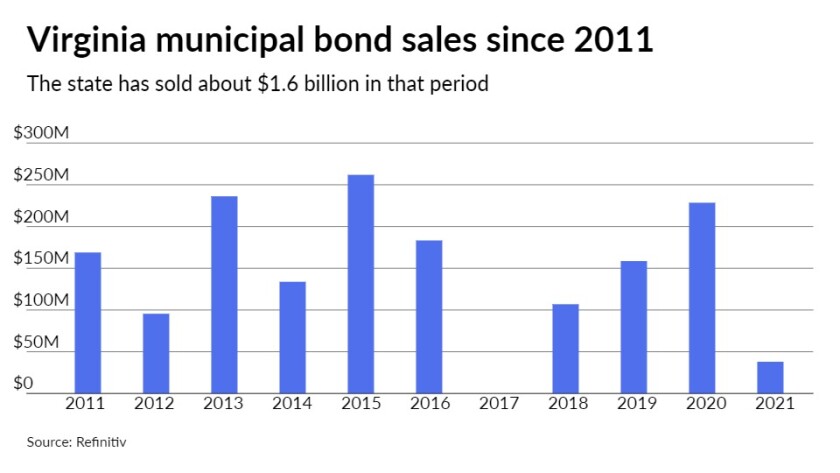 Despite taking a hit during the COVID-19 pandemic, Virginia’s prudent approach to financial operations along with its financial flexibility has kept the state’s ratings in the top tier.

Fitch Ratings late Thursday affirmed its AAA rating on Virginia’s $1.1 billion of general obligation bonds as well as on the state’s long-term issuer default rating. Additionally, Fitch affirmed the AA-plus ratings on $14.3 billion of appropriation-backed debt. The outlook on the bonds is stable.

Fitch noted that the state’s long-term liability burden is low and well-managed.

“Debt issuance is carefully monitored through both constitutional limitations and stringent institutional practices,” Fitch said. “A budget-driven deferral of pension contributions weakened the pension system’s funded position during the Great Recession, but actuarially determined pension contributions have since been restored. Virginia’s net pension liabilities remain below those of most states.”

The coronavirus pandemic took a toll on the state’s economic health. Nonfarm payrolls plunged 12% at the start of the pandemic, but as of May the state has recovered 58% of the jobs lost since April 2020.

However, Fitch said Virginia’s fundamental economic profile remains strong, with a diverse mix of industries and high wealth and it expects the state’s economy to absorb the negative effects of the pandemic and return to a steady pace of growth over the near term.

“The commonwealth is well-positioned to absorb any lingering budgetary implications from the recent downturn without affecting its long-term credit profile,” Fitch said. “Virginia ended fiscal 2020 with $1.1 billion in dedicated operating reserves (versus a $23.9 billion general fund budget), split evenly between the constitutionally mandated revenue stabilization fund and the statutorily created revenue reserve fund.”

Under the American Rescue Plan Act, the state and its local governments are expected to get $7.2 billion in aid from the Coronavirus State and Local Fiscal Recovery Fund. The state gets $4.3 billion of the federal funds.

Gov. Ralph Northam has called an Aug. 2 special session of the Legislature to allocate the ARPA funds.

Under the Coronavirus Aid, Relief and Economic Security (CARES) Act of 2020, Virginia received $3.3 billion. It directly received $3.1 billion and allocated all of the funds, including $1.3 billion to localities and $1.8 billion to state coronavirus-related response efforts.