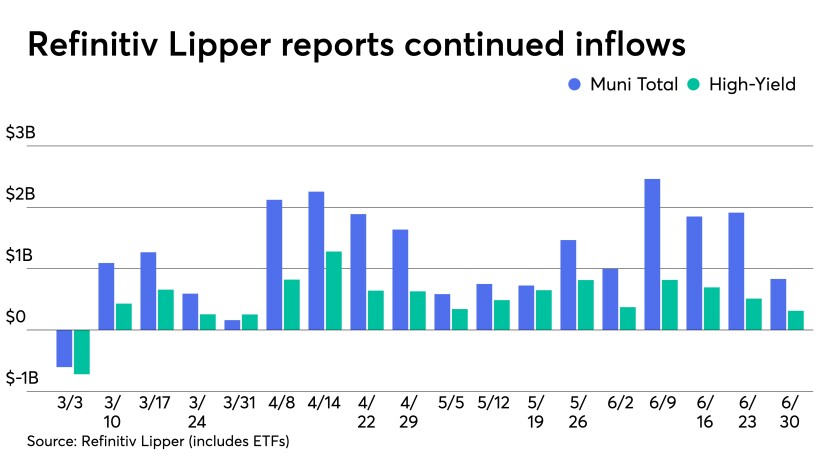 Municipals were firmer by a basis point Thursday amid light secondary trading and a quiet primary as the second half of the year and July reinvestment kicks off while broader markets mostly held steady ahead of Friday’s employment numbers.

Inflows came in below $1 billion for the first time since the start of June, with Refinitiv Lipper reporting $832.221 million into municipal bond mutual funds of which $313.275 million went into high-yield funds for the week ending June 30. High-yield is on pace to return 1.27% in June and more than 6% so far this year.

Market participants were winding down ahead of the extended July 4th holiday weekend with a firming tone, according to Jeff Lipton, managing director and head of municipal credit and market strategy and municipal capital markets at Oppenheimer & Co. Inc.

Throughout the second half of June, long benchmark tax-exempt yields rose by 10 basis points, essentially ending the month right where they began, Lipton said.

Even with the yield increase, municipals remain historically rich to U.S. Treasuries.

“Perhaps we were seeing some earlier muni market reaction to more diluted prospects of higher taxes,” he noted. “If the outlook for the future tax bite stays muted for a while longer and we continue to receive heavier doses of hawkish Fed-speak and higher inflation data points, yields may experience continued upward pressure.”

However, that scenario would likely be short-lived or distilled given the summer technicals that will generate very visible net negative supply conditions. Bloomberg data shows net negative supply at -$17.07 billion while 30-day visible supply has been hovering around $10 billion. Next week’s post-holiday calendar features $3.4 billion of negotiated deals, of which the largest deals scheduled is a $1.662 billion of taxable and $220.29 million of tax-exempt systemwide revenue bonds from AA-rated California State University Trustees.

“Demand for product is holding strong with primary deals being well-placed as there continues to be ample amounts of sidelined cash awaiting investment opportunities and guidance,” Lipton said.

He suspects that summer technicals have the potential to push municipals to outperform Treasuries over the near-term.

June performance gains
The broad market has seen a 1.06% return for the year, which lags seven of the last 10 years’ semi-annual returns, noted Kim Olsan, senior vice president at FHN Financial. June’s general obligation bond performance was at near parity with revenue bonds but the category is underperforming 2021 by 81 basis points.

“Trading favored the continuation of a risk-on theme last month with the 10-year AAA spot holding below 1%,” she said. “Duration extensions paid off again in June, with the long index gaining 0.69% and moving to a 2.33% gain for the year. Those moves have flattened the curve to less than 140 basis points, well flatter than the UST slope of 203 basis points (a long UST index ended 1H21 down 7.9%, after posting a 2Q21 gain of about 6%.)”

High-yield municipals are in the clear lead with 1.27% gains in June and over 6% for the year so far. Olsan noted the six-month gain already is better than half the annual gains of the last 10 years.

“Persistently-low rates are pushing buyers down the credit curve. A barometer of the sector’s moves is Chicago’s Board of Education (NR/BB) bonds: a 5% due 2031 issued in January at 1.94% (+120/AAA) went as high as 2.60% during the February selloff but traded recently at 1.44% (+51/AAA),” she said. “Programs with flexible allocations should continue to benefit in the sector.”

Healthcare gained 50 basis points in June and has earned 2.15% this year, besting the broad market by more than 100 basis points. Transportation bonds have earned 1.93% in 2021, benefiting from the rebound in air travel and greater use of toll roads and transit systems.

“For water and sewer credits, the very aspect that makes them a safer allocation is what has caused them to lag — secondary to wider sectors with more yield,” she said. The utility index is up a nominal 34 basis points this year.

Taxables posted a 1.68% gain in June and have now moved into a positive return for the year, erasing Q1 losses, Olsan said. On a year-over-year basis, the share of taxable supply to the overall total has fallen to 23% from 26%, creating less available paper with higher demand in play from taxable buyers.

In late trading, Treasuries were range-bound while equities were up.

Economy
The theme for the week remains unemployment ahead of Friday’s nonfarm payrolls report, while Thursday brought some encouraging labor news.

Initial jobless claims dropped to 364,000 in the week ended June 26 from an upwardly revised 415,000 the week before, first reported as 411,000 claims. While the number remains elevated, it is the lowest it’s been since before the pandemic caused economic shutdowns.

Also released Thursday, 20,476 layoffs were announced in June down from 24,586 in May, the lowest it’s been since June 2000, according to Challenger, Gray & Christmas, an outplacement firm.

While these and the better-than-expected ADP report do not have a direct correlation to the employment report, all three trending positive bode well for Friday’s release. Economists polled by IFR Markets expect 675,000 new jobs were added in June.

While the claims numbers continue to improve, “the issue really is hiring,” said Mark Hamrick, senior economic analyst at Bankrate. “The struggles of employers are well-advertised even with a still historically high unemployment rate.”

Wilmington Trust Senior Economist Rhea Thomas said the key questions about employment are: has substantial further progress occurred?; are supply constraints easing?; and what will happen to wages?

On the question of progress, she notes that with 7.6 million fewer jobs than pre-pandemic there is still “a ways to go,” despite the average of about 500,000 jobs added a month in the past three months. That pace is “strong enough to confirm continued recovery, but not so strong that they suggest an overheating of the labor market,” Thomas said.

Labor force participation will be a key issue. “Fed officials appear to be less concerned about the modest pace of employment gains despite further reopening of the economy,” she said, “in part because it believes temporary factors are constraining labor supply, including virus concerns, childcare issues, and expanded unemployment insurance benefits.”

The participation rate in the 25- to 54-year-old category may offer insight into childcare issues, while the under 25 category reflects summer jobs, but could ease the worker shortage.

“We may have to wait until the fall however, to get a clearer picture of whether labor supply constraints are easing,” Thomas said.

With students out of the workforce, most schools expected to be back in session (easing childcare concerns), and expanded unemployment benefits expired, after September there could be a rise in participation.

Wilmington expects labor supply constraints to ease in the next few months.

As for pay, “Wages are starting to simmer,” she said, “and upside pressures may build if firms that are struggling to keep up with surging consumer demand start to raise pay to attract workers.”

Also released Thursday, the Institute for Supply Management’s manufacturing PMI slipped to 60.6% in June from 61.2% in May.

New orders dipped and production gained. The prices index climbed to 92.1% from 88.0% in May, the highest level since 93.1% in July 1979. The employment index slid into contraction levels.

“Lack of labor is killing us,” according to a respondent in the primary metals business.

Respondents’ comments highlighted business conditions remained strong despite price pressures, material shortages and difficulty hiring. These complaints have been seen in this and other regional surveys for months.

And while “the peak of the supply-chain crunch” may be over, “by no means should this indicate things are getting back to normal,” House said.

Also released Thursday, construction spending fell 0.3% in May after a downwardly revised 0.1% gain in April, originally reported as a 0.2% increase.

Christine Albano contributed to this report.