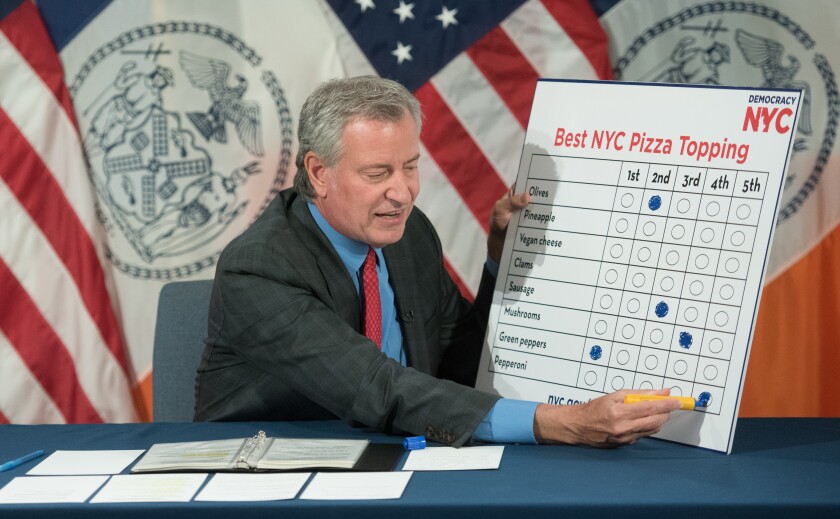 Chaos surrounds the vote count in New York’s Democratic mayoral primary with the city’s Board of Elections on Tuesday night acknowledging a major error in its ranked-choice tally under the new voting system.

The board said it mixed in 135,000 test ballots with numbers it released earlier in the day. Those numbers had showed Kathryn Garcia pulling into second place, neck-and-neck behind Eric Adams.

“We are aware there is a discrepancy in the unofficial [ranked-choice voting] round by round elimination report,” the board said in a statement. “We are working with our RCV technical staff to identify where the discrepancy occurred. We ask the public, elected officials and candidates to have patience.”

The board expects to reveal a new count Wednesday. It must still count 124,000 absentee ballots, which officials expect to do by July 6.

Adams, the Brooklyn borough president, cited a discrepancy in the overall vote count, saying Tuesday’s reported vote total exceeded that of election night by more than 100,000.

Late Tuesday night, the board removed the vote tallies from its website and replaced them with the headline “Unofficial Rank Choice Results Starting on June 30.”

The election-night total had Adams with 31.7% of first-place votes. Civil-rights advocate Maya Wiley and Garcia, a former city sanitation commissioner, had 22.3% and 19.5%, respectively.

Previous BOE fiascoes included the 2020 presidential election, when some New Yorkers received absentee ballots with an incorrect return address on corresponding envelopes. That forced the board to scurry to fix the problem before Election Day.

A city Department of Investigations report in 2013 said names of ineligible voters such as felons and people no longer city residents, plus deceased people, remained on voter rolls, sometimes for up to four years. Its recommendations included measures to standardize the hiring process, curtail the influence of county political committees related to employment, and professionalize poll worker training.

“Yet again, the fundamental structural flaws of the Board of Elections are on display,” said Mayor Bill de Blasio, who cannot seek re-election because of term limits. “There must be an immediate, complete recanvass of the BOE’s vote count and a clean explanation of what went wrong.”

“This isn’t just a New York City problem,” he said. “This should apply to every Board of Elections across the state — including right here in Suffolk County — with jobs based solely on merit.

“In the next legislative session in Albany, a statewide Board of Elections overhaul should be a top priority for election reform to strengthen democracy and instill public trust in our voting process.”

Also on Wednesday, the final day of the fiscal year, New York’s 51-member City Council expects to vote on a $98.7 billion fiscal 2022 budget. De Blasio and City Council Speaker Corey Johnson, a comptroller candidate, announced an agreement on what they called “a recovery budget.”

“This budget will help us turn the corner,” de Blasio told reporters in the City Hall rotunda.

He said the plan features “radical investments in working families” and adds $2.8 billion to reserve accounts, including $500 million for the new rainy-day fund, which voters approved in 2019. That raises the balance of that fund to around $1 billion.

“This might be the first time ever that anyone has ever cheered for budget reserves, but we will take it,” said Johnson, who is also term-limited.

Fittingly, the budget vote intersects with the rare midsummer primary because the new mayor must inherit the spending plan.

Business leaders and budget watchdogs are wary of the spending levels. In a letter to de Blasio, the Partnership for New York City and other organizations called on City Hall to use $6 billion in federal aid in the city budget more strategically.

“We write out of deep concern that current plans for these funds do not strategically support those sectors and communities that have suffered the greatest losses,” the letter said. “Failure to allocate these funds wisely will delay recovery and create unnecessary fiscal stress in the future.”

Federal money, the group said, should not go toward expanding the city payroll and long-term program commitments.

“City priorities such as universal pre-K and appropriate reimbursement for human services agency contracts should be part of the baseline budget funded by sustainable city tax revenues not by temporary federal grants,” the letter said.

The budget and the vote-counting come amid the city’s re-emergence from COVID-19, which dealt a blow to the city through emergency restrictions and stay-at-home mandates.

According to U.S. Bureau of Labor statistics, the region has continued its comeback, though jobs remained far below their peak in February 2020, one month before the pandemic escalated.

“We expect leisure and hospitality jobs will return and that the pace of recovery will pick up this summer as more tourists and workers return,” CreditSights said.

“The international segment of the tourism industry will lag. This fall, as Broadway reopens and more office workers and business travelers return to Manhattan, there should be new positive momentum.”

“Moody’s is going to be very happy when they see what we’re doing,” said council finance committee chairman Daniel Dromm.

The next mayor will inherit “an economic mess not dissimilar to what’s happening in other cities around the country,” Anthony Figliola, a vice president with Empire Government Strategies, said on a Bond Buyer podcast.

The new mayor should engage business leaders and the public, according to Nicole Gelinas, a senior fellow with the Manhattan Institute for Policy Research.

“I think the biggest thing is just go out and talk to people. It might not be a bad thing to go to Grand Central, go to Penn Station, go to some of the major subway stops and just greet people who are coming back to their offices and say thanks for coming back to Manhattan, give us a chance again.

“Don’t be afraid to call the head of a bank once in a while and say ‘What’s going on, what are your employees thinking about when they’re walking around the streets of Manhattan?’”