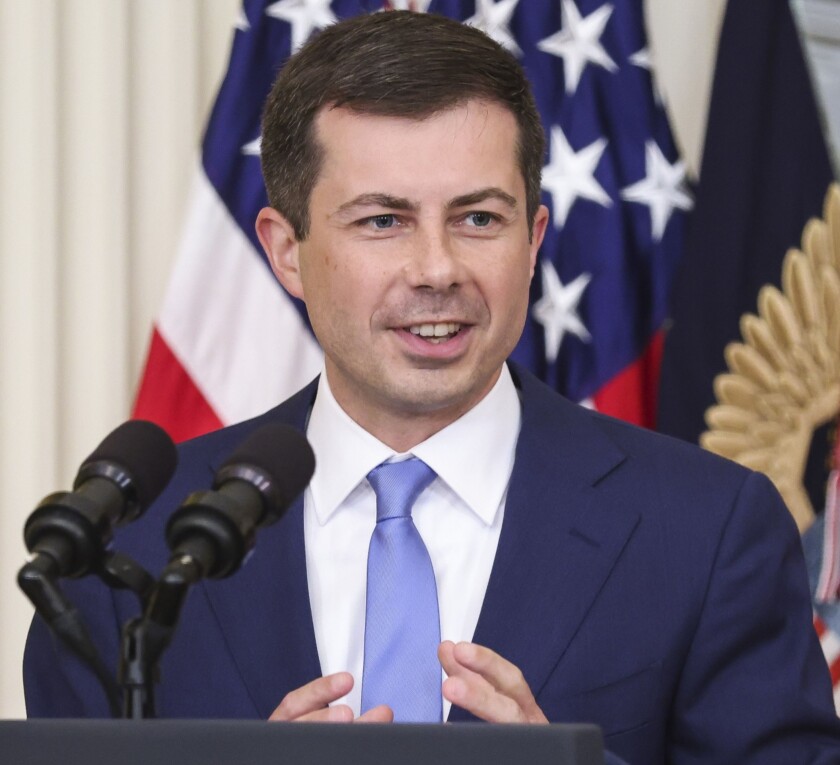 “This entire technology is really outdated,” he told reporters on Monday. “Pieces of it can literally blow.”

Buttigieg and members of congressional delegations from both states on Monday toured the tunnels related to the $11.6 billion Gateway project, then touted safety and the economy in their final push for funding.

The tunnels are roughly 110 years old and saltwater damage from Hurricane Sandy in 2012 worsened their condition.

“The building plan is now sometime in 2023. We’re trying to get it moved up to 2022,” he said. Once primary construction starts, the project could take seven years.

Backing from President Biden, a passenger rail advocate, and possible funding through a $1.2 trillion infrastructure bill before Congress could push the tunnelrebuilding project to the finish line.

Yet despite Biden’s approval last week of what he called a bipartisan framework for the American Rescue Plan, partisan bickering in Washington could temper any new optimism for this long-delayed project.

Tom Kozlik, had of municipal strategy and credit for Hilltop Securities, said a bipartisan agreement that passes the House of Representatives and Senate is still unlikely. In addition, Democrats “also have a long way to go before they can get something done through budget reconciliation,” Kozlik said.

New York Gov. Andrew Cuomo has said he worries about writing a blank check for his state’s portion, echoing the concerns of former New Jersey Gov. Chris Christie a decade ago.

“The state also has other pressing infrastructure needs such as East Side access, Second Avenue subway, congestion pricing, and infrastructure in our upstate cities,” Cuomo said Monday.

“It is imperative that we use our state funds in a cost-effective manner to do as much work as possible. We look forward to working with our federal partners and expect to see a smart, fair, cost-effective plan to get the Gateway tunnel project completed.”

The Federal Railroad Administration and Federal Transit Administration, both U.S. Department of Transportation units, approved the project last month through a final environmental impact statement and a record of decision on the project. That allows pre-construction activities such as real estate acquisition and utility relocation.

Buttigieg had promised to remove any unnecessary barriers.

“It’s vitally important to New York, New Jersey and the entire northeast corridor, but the impacts of this corridor are so great that if there were a loss of service, if one of these tunnels were to go out of service, you would be feeling the economic impact all the way back in Indiana where I come from,” said Buttigieg, a former South Bend mayor.

Former President Donald Trump’s administration had stalled the project, holding up environmental approvals and dropping the project on the U.S. Department of Transportation’s priority list.

The undertaking is vital to Northeast Corridor train traffic. The tunnels are adjacent to New York’s Penn Station, which is undergoing its own massive renovation.

A companion project, at about $1.8 billion, involves the rebuilding of the Portal North Bridge across the Hackensack River in Kearny, New Jersey. The bridge carries Amtrak and NJTransit trains.

U.S. Sen Cory Booker, D-NJ, said the tunnels now create a chokepoint that affects a northeast region where 20% of the nation’s economy circulates.

“This clogged artery must be cleared,” he said.

The work, a joint undertaking among the Gateway Planning Development Corp., Amtrak, NJTransit and the Port Authority of New York and New Jersey, would include constructing a dual-track tunnel under the Hudson River and rehabilitating existing tubes to double-rail capacity.

The estimated tab for the tunnel project and companion Portal North Bridge across the Hackensack River in Kearny, New Jersey, is about $11.6 billion.

Costs from other projects range from nearly $2 billion to fix the old tunnel and, on a broader scale, a further $11 billion for the so-called Penn Station South, to enable more trains into Manhattan. New Jersey is also in store for $9.3 billion of related projects.

Cuomo’s plans for the so-called Empire Station Complex, which would include a series of skyscrapers around Penn Station, are on hold after an amendment to the state fiscal 2022 budget limited a $1.3 billion allocation to transportation and infrastructure improvements.