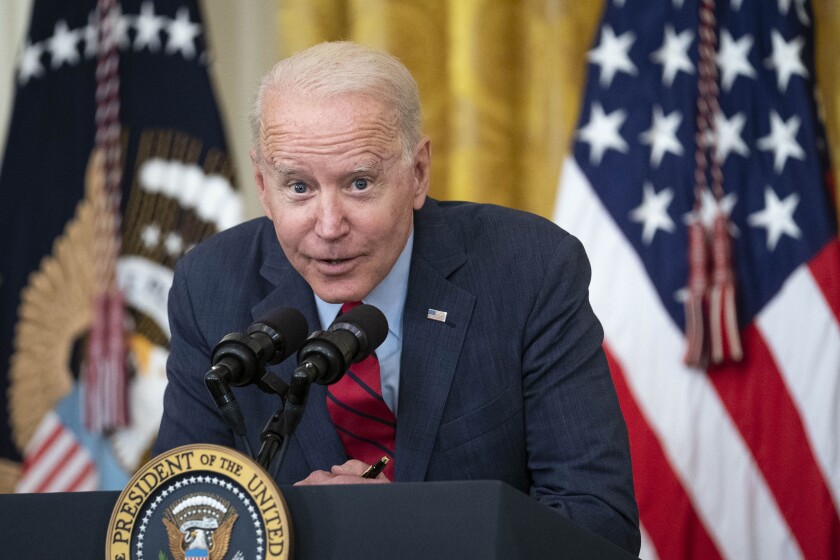 Municipal securities dealer groups said Friday they are opposed to the creation of a $20 billion Infrastructure Financing Authority as part of a $1.2 trillion bipartisan infrastructure framework announced Thursday.

National Association of Counties spokesman Paul Guequierre said in an email, “Counties support federal investments in infrastructure using a variety of financing tools, including but not limited to, a national infrastructure bank.”

The National Association of Health & Educational Facilities Finance Authorities has not taken a position, said Charles Samuels of Mintz Levin of Mintz Levin, who serves as the group’s legal counsel.

“In my personal opinion it’s of marginal uncertain value,” said Samuels. “I don’t know what the gap is in current state and local financing that this is supposed to fill.”

Samuels said he agrees with state and local government groups that the focus should be on reinstating tax-exempt advance refunding bonds and expanding the current financing tools.

Other state and local government groups did not immediately announce their positions.

Emily Brock, director of the federal liaison center for the Government Finance Officers Association, said she was trying to determine whether there will be room for inclusion of the other municipal financing priorities in the package.

Some of the measures are not big-ticket items and the framework announced Thursday does not yet have legislative language.

An increase for small issuers to $30 million from $10 million of the amount of tax-exempt bonds they can sell to banks can buy under favorable terms as bank-qualified would cost only $118 million over 10 years, according to an estimate last year by the nonpartisan congressional Joint Tax Committee. Bank qualified debt, also known as BQ debt and bank eligible, allows the bank to deduct the carrying cost of that debt as a business cost.

The framework announced by President Biden and a bipartisan group of senators has $312 billion for transportation. It includes $109 billion for roads and bridges, $11 billion for safety, $49 billion for public transit, and $66 billion for passenger and rail freight.

That’s $16 billion more for road, rail and transit spending than the transportation bill passed by the House Transportation and Infrastructure Committee, according to an analysis by the independent Eno Center for Transportation.

It was not immediately clear how the categories listed by the White House compare to legislation the House and Senate are working on. For instance, the bipartisan agreement lists $55 billion for water projects. The Senate recently voted overwhelmingly to approve the $35 billion Drinking Water and Wastewater Infrastructure Act of 2021. And the House version of the water bill is for $50 billion.

The House Democratic leadership, meanwhile, is sticking with its plan to move its own surface transportation bill. House Majority Leader Steny Hoyer, D-Md., said Thursday the Democrats’ INVEST in America Act will be brought to a floor vote the week of June 28.

The House bill includes $343 billion for roads, bridges and safety, another $109 billion for transit and $95 billion for freight and passenger rail.

Despite the apparently higher spending in Biden’s deal with the bipartisan Senate group, the proposal for a new federal financing bureaucracy met with immediate and strong opposition from Municipal Bonds for America, the Bond Dealers of America and the American Securities Association.

The two groups said that Congress and the administration instead should empower state and local governments to make additional investments by “reinstating tax-exempt advance refundings, expanding private activity bonds, raising the limit of bank qualified debt and creating a new direct pay bond, the American Infrastructure Bond exempt from sequestration.”

Warner’s bipartisan bill would create a new federal entity to finance projects of regional or national significance, including the construction, consolidation, alteration, or repair of airports and air traffic control systems, highway facilities, and transmission or distribution pipelines.

“Rather than creating a centralized bureaucracy to dictate funding from Washington, the federal government should instead promote and encourage the use of taxable municipal bonds for infrastructure projects,” Iacovella said in a press statement. “ASA’s regional financial services members have a long history of successfully financing ‘hard’ infrastructure investments and are more than ready to do so again.”

The bond financing provisions of the Moving Forward Act that was advanced by House Democrats last year totaled $83.9 billion over 10 years, so the deal announced by Biden for a $20 billion financing authority is less than one-quarter of that.

Biden said Thursday he is committed to a two-track process in which his American Families Plan moves simultaneously through the budget reconciliation process with Democrats-only support.

“The bipartisan bill from the very beginning was understood there’s going to have to be the second part of it,” Biden said. “Not just signing the bipartisan bill and forgetting about the rest I have I proposed.”

Muni provisions could conceivably be included in that Democrats-only bill. The Moving Forward Act passed by the House last year had provisions for school bond financing and multifamily housing private activity bonds that would be more suited to that legislation.