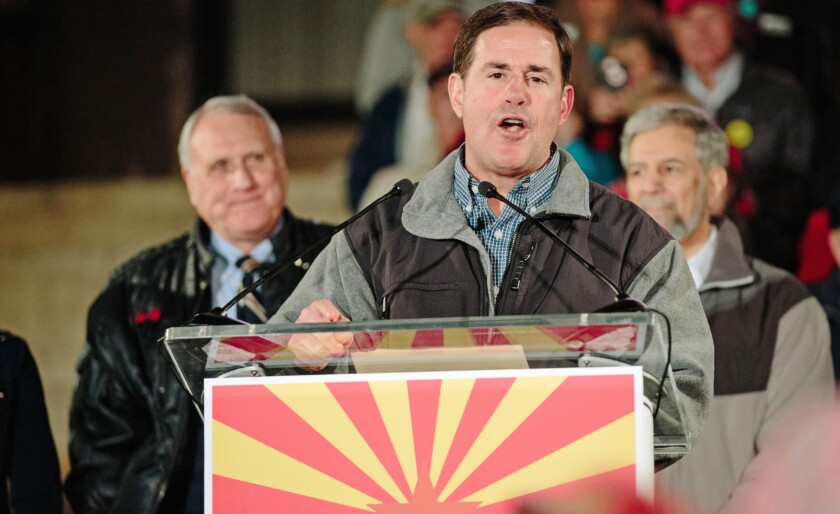 Just three days before the start of a new fiscal year, Arizona lawmakers and Gov. Doug Ducey have agreed on a $12.8 billion budget that includes what they call the largest tax cut in state history.

“We achieved a tax cut that will protect working families and small businesses, we’re paying off hundreds of millions of dollars in debt, we have the most sweeping child care package in the nation, and we’re making record investments in K-12 and higher education, infrastructure and public safety,” Ducey said after party-line House passage of the spending measures. The GOP narrowly controls both houses of the legislature and the governor’s office.

The legislative battle over the tax cuts comes after a court fight over Proposition 208, a 2020 voter initiative that imposed a 3.5% surcharge on income above $250,000 for individuals or above $500,000 for couples. The measure was designed to raise about $940 million a year for schools, although the Legislature’s budget analysts estimated it would bring in $827 million a year.

The proposition came after a 2018 teacher strike that resulted in educators getting a 20% pay raise over three years.

Ducey, who opposed Proposition 208, told a business group that he hoped either the state Supreme Court blocked the measure or the Legislature came up with a way to dodge the new tax.

To partially offset the 3.5% surcharge from Proposition 208 on individuals, the new tax measure would cap income tax rates at 4.5% so that high earners would pay 1% on top of the new surcharge.

“This budget makes responsible, targeted and substantial investments in the things that matter while allowing hardworking taxpayers to keep more of the money they earn,” Ducey said after the budget deal was reached. “It is a landmark plan and it is the result of one of the most successful legislative sessions in Arizona history.”

Republican leaders claimed that only the legislature has the right to impose a tax. The Arizona Constitution specifically says any law that can be enacted by lawmakers “may be enacted by people under the initiative,” Hannah wrote.

“It could hardly be clearer that the people of Arizona reserved to themselves the authority to exercise all of the legislature’s powers including the power of taxation,” Hannah wrote. “They have deployed that authority repeatedly through Arizona history.”

Earlier, Hannah ruled that Prop. 208 does not violate a constitutional limit on how much can be spent annually on education.

Hannah’s ruling in that case is under review by the Arizona Supreme Court. The high court has not said when it will rule on the appeal.

According to a June report from Arizona State University’s W.P. Carey School of Business, Arizona would need to add $5 billion to education funding to reach the national average.

“Arizona ranked 46th among the 50 states,” the report said. “For appropriations per FTE [full-time enrollment] student in Arizona to have equaled the U.S. average in FY 2020, additional state and local government funding of $940 million was needed.”

Arizona voters have sought to raise funding for public schools through various initiatives, including Proposition 208.

Proposition 301, passed by voters in November 2000, increased the sales tax rate by 0.6 percentage points, with the additional revenue dedicated to education.

In May, 2016, Proposition 123 increased distributions from the permanent state school fund.

A plan to raise teacher salaries by 20% over three years was passed by the Arizona Legislature in April 2018. Related to this plan, funding increased by $306 million in FY 2019, with an additional funding increase in 2020 and 2021 of $339 million.

“The additional funding in FYs 2020 and 2021 from the plan to raise teacher salaries represents less than 8% of the amount needed in FY 2019 to bring per student state and local government appropriations up to the national average,” the ASU report said.

As approved by both houses of the Legislature, the new budget pays off nearly $1 billion of debt by buying back buildings that were mortgaged after the 2008 recession. It also adds another $1 billion to reduce the state’s pension liabilities, Ducey said.

Another $50 million goes toward widening Interstate 10 between Phoenix and Tucson.

With $3.16 billion of tax-supported debt, Arizona ranks 27th among states in outstanding debt, according to S&P Global Ratings, which has rated the state AA since 2015 with a stable outlook. Per capita debt of $426 puts the state in 39th place nationwide.

Like other states, Arizona is enjoying an economic resurgence a year after the pandemic caused a brief but deep recession.

General fund revenues during May were 97% above the prior year, according to the Joint Legislative Budget Committee.

The surge was driven by improving economic conditions and also helped by timing issues related to the state’s income tax deferral policy, the committee said.

May sales tax collections, which reflect April sales, increased by 40% above the prior year.

“Given that the May 2020 revenue base (April 2020 sales) reflected a month completely covered by the COVID-19 stay- at-home order, significant percentage growth was expected,” the report said. “Even with that expectation, May sales tax collections were still well above forecast with a gain of $100.5 million.”

For much of the session, legislative Republicans had maneuvered for a 2.5% flat income tax rates, which was expected to reduce tax revenue by fiscal year 2025 by up to $1.9 billion. The cost to local governments, not including school districts, was projected to be $285 million or more, according to the Arizona League of Cities and Towns.

A floor amendment to Senate Bill 1828 and its companion House Bill 2900 increased cities and towns’ share of urban revenue from 15% to 18% starting in fiscal year 2023.

The league advocated for the increase to help offset losses to local revenues.

London’s rental market is in crisis. Here’s why and how renters are struggling
India to Introduce Measures Around Crypto This Year, Says Government Official
China’s real estate crisis isn’t over yet, IMF says
Israel’s Supreme Court Chaos: An Issue US Christians Should Care About?
The moon has a hidden tide that pulls on Earth’s magnetosphere, new study reveals