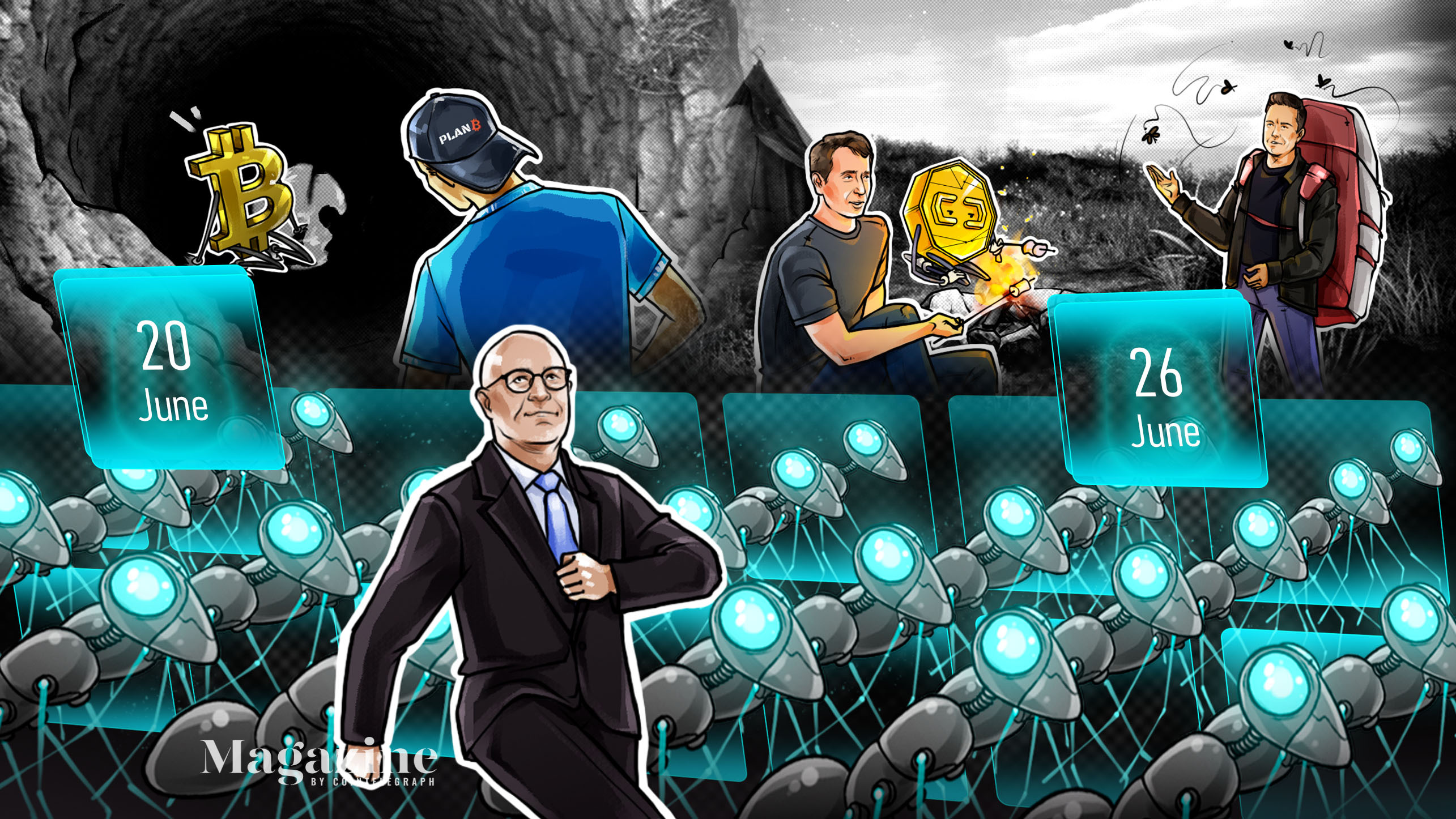 Coming every Saturday, Hodler’s Digest will help you track every single important news story that happened this week. The best (and worst) quotes, adoption and regulation highlights, leading coins, predictions and much more — a week on Cointelegraph in one link.

John McAfee was found dead in his Spanish prison cell hours after the country’s courts ruled that he could be extradited to the U.S. to face tax evasion charges. He was 75.

He was best known for creating one of the world’s best-known antivirus software programs. The entrepreneur also made headlines in the crypto space and mainstream media for a July 2017 prediction that the price of Bitcoin would reach $500,000 by 2020. McAfee didn’t end up fulfilling the terms of an extravagant bet where he claimed he would “eat [his] dick on national television” if it didn’t happen.

Spanish officials have not ruled out the possibility that McAfee killed himself. News of his death prompted an outpouring of tributes and conspiracy theories.

Former NSA employee and whistleblower Edward Snowden tweeted: “Europe should not extradite those accused of non-violent crimes to a court system so unfair—and a prison system so cruel—that native-born defendants would rather die than become subject to it.”

Cardano founder Charles Hoskinson described McAfee as a “deeply troubled person,” but praised him as being “one of the most enigmatic and interesting people in the cryptocurrency space and the history of computing.”

El Salvador to airdrop $30 in Bitcoin to every adult citizen

The opposition may be mounting a challenge to President Nayib Bukele’s Bitcoin Law, but it seems that El Salvador’s leader is determined to push ahead with his plans to adopt the cryptocurrency as legal tender.

This week, Bukele announced that the government will airdrop BTC worth $30 to citizens who download a government-issued crypto wallet. He went on to confirm that BTC will officially become legal tender on Sept. 7.

The announcement was welcomed by Bitcoiners, with influencers speculating that El Salvador’s government will need to purchase the required BTC it intends to distribute — adding more than $100 million in buying pressure on markets.

On-chain analyst Willy Woo tweeted that Bitcoin’s global user base will grow by 2.5% if all 4.5 million Salvadorans take the president up on his offer.

Bitcoin has retraced once again after hitting highs of $36,059.48 earlier this week.

And according to Flibflib, an independent market analyst, altcoin traders and investors should duck for cover if the world’s biggest cryptocurrency falls below $30,000.

In a tweet published late Friday, they said a 30% crash in the Bitcoin market could prompt altcoins to drop twice as hard.

At the time of writing, Bitcoin is down 14% on the week, but coins with a smaller market cap have had it far worse. Ether is down 21%, Binance Coin has fallen 20%, Dogecoin has lost 19%, and XRP is nursing losses of 25%.

Bitcoin heading for worst quarter since start of 2018 bear market

Bitcoin is poised to post its worst-performing quarter since the start of the 2018 bear trend.

The current quarter is also on track to be the second-worst on record for BTC in the almost eight years since the start of 2014.

Bitcoin is currently down 47% for the quarter — its weakest quarter since Q1 2018, when it shed approximately 50% of its value over just three months amid the fallout from 2017’s all-time highs.

XRP token holders have been accused of targeting members of the U.S. Securities and Exchange Commission with false statements on social media.

Among those apparently in the XRP Army’s sights are a former director of the SEC, with the commission warning that this could deter individuals seeking positions in public service.

The SEC filed a lawsuit against Ripple in December, alleging the firm, CEO Brad Garlinghouse and co-founder Chris Larsen had been conducting an “unregistered, ongoing digital asset securities offering” with their XRP token sales.

In response to the SEC lawsuit, Ripple has claimed that XRP is more like Bitcoin or Ether — both of which the regulatory body has classified as commodities rather than securities.

Among the biggest 100 cryptocurrencies, the only altcoin gainer of the week is Celo. The top three altcoin losers of the week are Kusama, Internet Computer and Amp.

For more info on crypto prices, make sure to read Cointelegraph’s market analysis.

“6 million people added to the crypto ecosystem in one go.”

“its not wise to think governments have no tools in their kit to go after the bad guys,,, they do. if we want this ecosystem to grow we need to recognize we need to operate within the rules society sets.”

“In order for Bitcoin to one day exceed gold, it’ll have to be more of an accepted form of currency — I’m not sure, frankly, if it ever gets there.”

“What we’re seeing is a correction, a contraction, and a lot of what is getting shaken out is what we call the paper hands, the weak hands.”

“Sold almost all of my Bitcoin. Don’t need it.”

Prediction of the Week

Not everyone is gloomy about Bitcoin’s prospects — and one of them is PlanB, the creator of the stock-to-flow model.

Even as BTC/USD sees multiple retests of lows from months past, the analyst — and his models — remain firmly fixed on a far brighter mid-term goal for the largest cryptocurrency.

Now, even the “worst-case scenario” for Bitcoin would still see it trade at $47,000 in August. A slight reversal in September places the minimum target at $43,000 for that month only to be followed by $63,000 in October — near current all-time highs.

That being said, PlanB says he is “uneasy” about his renowned price predictions due to the recent downtrend in the markets. In a recent poll he performed on Twitter, 41% of respondents said they think Bitcoin will stay below $100,000 in 2021 — invalidating his model entirely.

FUD of the Week

Thomas Farley, the former head of the New York Stock Exchange, is feeling bullish about Bitcoin — but he had a caveat that clips the wings of ardent crypto enthusiasts.

Although he believes BTC has the potential to rise in the long term, he’s expressed doubts about the narrative that this cryptocurrency is “digital gold.”

Farley said: “In order for Bitcoin to one day exceed gold, it’ll have to be more of an accepted form of currency — I’m not sure, frankly, if it ever gets there.”

To beat gold, Bitcoin would need to trade at more than $533,000 with the current supply.

A New York judge has issued a temporary restraining order to block an alleged attempt from Roc-A-Fella Records Inc. (RAF) co-founder Damon Dash to sell a tokenized version of Jay-Z’s first album Reasonable Doubt along with its copyright.

Dash has claimed that he was only trying to sell his stake in RAF, which he established with the rapper and Kareem Burke in 1995.

The record label has split ownership between the three, with the company owning the full copyright to the album in question.

A complaint filed on June 18 said: “The bottom line is simple: Dash can’t sell what he doesn’t own. By attempting such a sale, Dash has converted a corporate asset and has breached his fiduciary duties.”

A judge has agreed to halt the NFT sale, and restrained Dash from selling the copyright to the album until July 1 at the earliest.

Jim Cramer has liquidated nearly all of his Bitcoin holdings.

The host of CNBC’s Mad Money believes BTC is “not going up because of structural reasons,” highlighting China’s renewed regulatory clampdown.

Cramer warned China’s central government sees Bitcoin to be a “direct threat” to the regime and its capacity to control monetary flows within the country — describing the cryptocurrency as “as a system that’s outside of their control.”

The escalating Chinese crypto mining ban has sent Bitcoin’s hash rate tumbling to an eight-month low as mining operations either shut down or move offshore.

Shrugging off the cryptocurrency, which he recently used to pay off a mortgage, Cramer added: “Sold almost all of my Bitcoin. Don’t need it.”

More profound security practices will encourage wider trust in DeFi and create a culture around security that will advance the industry.

The Bitcoin Taproot upgrade will activate later in 2021 as developers urge to create applications that will leverage its advantages.

Lido Protocol Reveals Plans for Withdrawal Feature Ahead of Ethereum’s Shanghai Hard Fork
Trump Will Run For Office In 2024 But May Not Stay In The Whole Time, Says Book Author: ‘He’s Backed Himself Into A Corner’
Stocks making the biggest moves midday: Wayfair, Meta, Apple, Spotify, Qualcomm and more
South Carolina county bonds to fund private water utility buyout
‘It’s a Miracle … A Needle in a Haystack’: Family Thanks God as Son Rescued After Being Swept Out to Sea