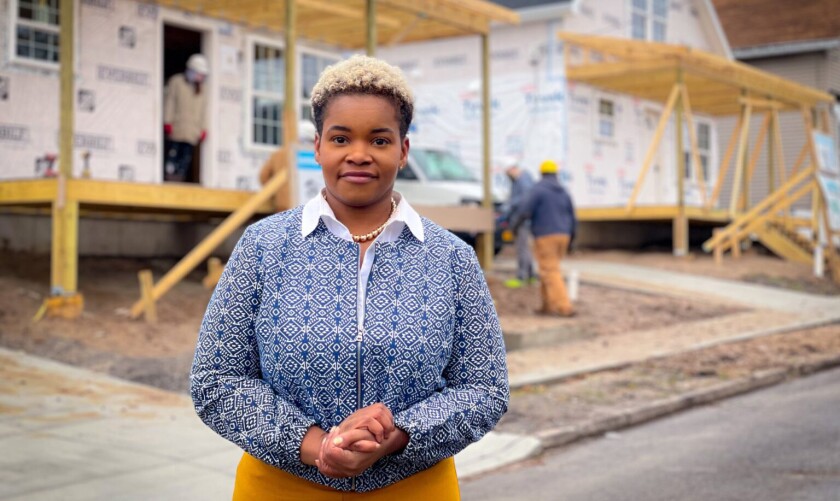 In Buffalo, about 400 miles away from New York City’s much-publicized mayoral primary, heavy political winds are blowing and they aren’t from any lake effect.

India Walton, 38, a registered nurse and union activist, stands to become the first self-declared socialist to oversee a major American city since Milwaukee’s Frank Zeidler in 1960. Walton, an African-American, would be the first female mayor in the state’s second-largest city.

With all in-person votes from Tuesday’s Democratic primary counted, Walton was leading four-term incumbent Byron Brown 52% to 45%, or by 1,507 votes. Brown, who is also Black, has yet to concede, although a turnaround through absentee ballots is highly improbable. Brown, though, could organize a write-in campaign for November.

No Republican is on the ballot.

“Walton’s win will have ripple effects beyond western New York — bolstering the fear among the state’s incumbent Democrats of urban progressive cadres with nothing to lose in low-turnout primaries,” E.J. McMahon, founder and senior fellow at Albany-based think tank Empire Center, said in a commentary.

Walton received endorsements from the Democratic Socialists of America, the nation’s largest socialist group, and the hard-left Working Families Party.

“Sometimes I come up with wacky ideas,” she said.

Walton received a congratulatory call on election night from Ocasio-Cortez, now a face of the national progressive movement. And while Walton’s campaign war chest was modest, she did receive contributions from high-profile activists, including New York City Public Advocate Jumaane Williams and actress Cynthia Nixon, a former gubernatorial candidate.

Walton sought alienated voters who felt Buffalo’s rebuilding in recent years left them in the lurch. She has talked about making home ownership more accessible and incentivizing municipal workers who live in the city.

She warned that tax increases loom. “People are willing to pay more for municipal services that they want and need,” she said.

Walton struck a defiant tone in her victory speech. She told screaming supporters her win reflected “the work of a well-meaning group of rebels and revolutionaries.”

“This is Buffalo and it’s not lost on me that we have a very entrenched Democratic Party that has no interest in our type of politics,” she said.

“If you are in an elected office right now, you are being put on notice.”

Policing was a major theme with Walton calling for an overhaul of law-enforcement procedures. The city drew nationwide attention during last summer’s civil unrest when officers were caught on camera shoving an elderly man to the ground, causing a head injury, in Niagara Square, near City Hall. A county grand jury in February dismissed the case against the two officers.

Brown, first elected in 2005, had won by double digits in three Democratic primaries and was uncontested in another.

“Mayor Brown, who I know very well, and I have nothing but good things to say about Mayor Brown, but he decided basically his campaign strategy as I understand it was basically to avoid engaging in a campaign and then you had a very low turnout,” Cuomo told reporters on Wednesday.

“We know that combination. We’ve seen that before. That doesn’t work.”

“I look forward to working with her to create the best City of Buffalo possible for our mutual constituents,” he said.

Democrats have themselves to blame for the infighting, according to Anthony Figliola, a vice president at Empire Government Strategies. He called Walton’s rise the bi-product of years of neglect by the party.

“They looked the other way when gentrification pushed her and her neighbors out of the Fruit Belt of Buffalo,” Figliola said.

Walton’s Fruit Belt neighborhood along the city’s East Side derives its name from orchids that early German settlers planted. The construction of the Kensington Expressway in the 1950s effectively severed it, spawning years of disinvestment. In addition, the buildout of the Buffalo Niagara Medical Campus in the neighborhood has stoked heated debate over gentrification.

Buffalo’s bonds are rated A-plus by S&P Global Ratings, A1 by Moody’s Investors Service and A by Fitch Ratings. S&P lifted its outlook to stable from negative in February.

The city’s bonds were a notch above junk in 2003 after Moody’s Investors Service downgraded the city to Baa3. A state fiscal control board that former Gov. George Pataki created helped spawn three upgrades between 2012 and 2016, while Brown was in office.

After achieving predetermined benchmarks, the Buffalo Fiscal Stability Authority moved into an advisory role in 2012, although state officials could reactivate it if necessary.

“Even if the city were to receive significant one-shot revenue from the state or the federal government, concerns around future revenue generation remain,” said S&P analyst Lauren Freire. She also cited negative operating results in three of the last four years, which has weakened reserves.

A drop in sales-tax revenues and state aid withholding due to COVID-19 prompted the city to issue deficiency notes in June 2020 that it expects to repay in December.

Credit strengths, according to Moody’s, include state oversight and a requirement to set aside property tax revenue with the trustee until debt service is fully funded before using property taxes for other purposes.

“These strengths are balanced by a below average wealth and income profile and an above average fixed cost burden,” said Moody’s.

Walton gave birth at age 14 and earned her graduate equivalency degree while pregnant with twins who were born prematurely, according to her campaign website. As a nurse, she became a representative in the 1199 Service Employees International Union and spoke in 2014 at a national women’s rights rally on the steps of the U.S. Supreme Court.

She said her work in the city’s school system, where she saw health disparities, motivated her to fight injustice.

The progressive push has also been visible in New York City, notably in City Council races.

There, while two of the top three leaders in the Democratic mayoral primary under the new ranked-choice system — Eric Adams and Kathryn Garcia — are considered moderates, progressives stand to make the 51-member City Council lean further to the left. Newcomers in January will constitute more than half of its members.

The leftward swing compelled one council incumbent, Mark Gjonaj of the Bronx, not to seek re-election.

“The current political climate is not favorable to a centrist ideology that my constituency, community and I embrace,” Gjonaj said in February.

Lovely Warren, seeking a third term while under a campaign-finance related indictment, fell to City Council member Malik Evans. Warren was also under scrutiny over her handling of a killing by police.

According to Empire Center’s McMahon, Democrats statewide are hearing footsteps from the hard left.

“Even moderately inclined officeholders have been willing to embrace more left-leaning positions — as reflected in the increasingly progressive voting records and policy stances of upstate Democrats in the state legislature,” he said.

“Walton may not be able to bring the revolution to Buffalo, but her victory will reinforce this political trend.”

A job-destroying economic vortex has just been unleashed: Large-scale layoffs will accelerate through 2023, impoverishing millions
Nashville Estate Loved By Country Music Celebrities Is Up For Absolute Auction
New map of the universe’s matter reveals a possible hole in our understanding of the cosmos
Prospects rise for NY charges against Trump in Stormy Daniels case
Putin To Give A Million Rubles Each To All Women Who Give Birth To 10 Or More Children