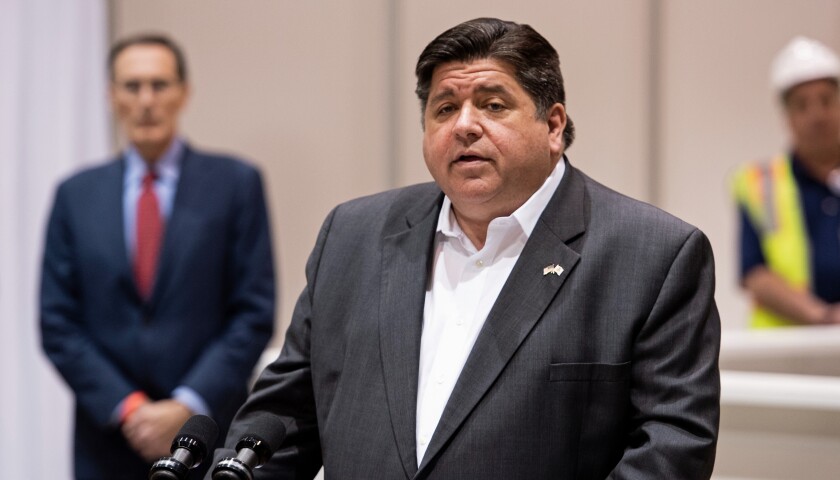 Illinois moved closer to winning an upgrade thanks to budgetary steps in the right direction and a rosier revenue trajectory that Fitch Ratings recognized in raising the state’s outlook to positive from negative.

Analysts lowered the rating one notch and put a negative outlook on the credits in the spring of 2020 citing the fiscal threat of the coronavirus pandemic.

Wednesday’s shift in outlook stems from a combination of actions taken by the state including its decision to use rosier revenue projections to pay down short-term, pandemic-related borrowing along with the economic benefits reaped from federal coronavirus relief aid that has bolstered an economic recovery.

“The state appears positioned to at least restore financial resilience to pre-pandemic levels,” Fitch said. “Recent fiscal results and the enacted $42.3 billion fiscal 2022 budget suggest further improvements in operating performance and structural balance in the near and medium-term that could support a return to the pre-pandemic rating or higher.”

Gov. J.B. Pritzker, whose administration along with Comptroller Susana Mendoza has sought to make the state’s case for upgrade to the public and with analysts called Fitch’s action “yet another sign of positive momentum for our state’s fiscal condition, a testament to strong financial management and responsible actions by the General Assembly and my administration, and a product of the state’s economic resilience.”

Moody’s Investors Service and S&P Global Ratings in the spring of 2020 held their ratings at Baa3 and BBB-minus, respectively, but moved the outlook to negative.

Both restored stable outlooks in March as revenue dramatically improved and the federal government enacted the American Rescue Plan which provides $8.1 billion for Illinois. Fitch’s lead Illinois analyst Eric Kim signaled then that the agency was likely to wait to see how the fiscal 2022 budget panned out and how the state would the new federal relief so as not to add to structural strains.

Pritzker last week signed a new budget that mostly holds spending levels steady and uses rosier revenue projections to retire early $2 billion of three-year borrowing through the Federal Reserve’s Municipal Liquidity Facility. It also repays $928 million of interfund borrowing used for cash flow and budget management earlier in the pandemic. The state’s backlog of overdue bills hovers at its lowest levels in years around $3 billion to $3.5 billion after hitting $16.7 billion in 2017.

The budget benefits from $655 million of recurring revenue as Pritzker won approval from fellow Democrats who hold a legislative majority for a portion of the $932 million of rollbacks in corporate income tax breaks. The budget also skips one-shots like funding cuts to local governments and interfund borrowing that would drive up the structural gaps. One of the rollbacks accounting for $314 million in savings does expire in three years, so that poses a structural challenge.

Fitch praised the state’s actions but analysts continue to watch for follow-through on some promises and further progress before handing out an upgrade.

“Sustained progress in reducing the state’s liability burden, such as by maintaining recent improvements, further reducing accounts payable closer to a level more consistent with normal operations, or fully repaying federal and interfund borrowings in the next fiscal year” could help drive an upgrade, Fitch said.

A “continuation of the recent pattern of more normal fiscal decision-making, including on-time budgets that address fiscal challenges primarily with sustainable measures” and a “narrowing of the structural budget gap by better matching recurring revenues with recurring spending, including funding pensions at actuarially determined levels” would also help, Fitch said.

Illinois remains the lowest rated state due, at least in Fitch’s consideration, to “a long record of structural imbalance and irresolute fiscal decision making” that resulted “in a credit position well below what the state’s slow-growing but broad economic base and substantial ability to control its budget would otherwise support. The rating also reflects the state’s elevated long-term liability position and resulting spending pressure.”

The state’s $141 billion unfunded pension liabiliy tab poses the most burdensome weight on the long-term rating prospects. The budget makes the scheduled $9.8 billion contribution based on a statutory formula that falls far short of actuarial levels, but it makes no headway with fixes to reduce the strains. A $56 billion unfunded retiree healthcare tab also weighs on the credit.

“For pensions, the budget fully funds the statutory contribution requirement, which falls short of the actuarially determined contribution and will lead to growth in the unfunded liability over time and rising pressure on the state’s expenditure framework and long-term liability burden,” Fitch warns, adding that gaps “will create an ongoing budget management challenge for the state.”

Fitch called the state’s initial plans to spend $2.8 billion of its new federal ARPA dollars on infrastructure and other one-time or pandemic related needs measured. “With this initial allocation, the state appears to have avoided the use of ARPA aid for any material ongoing program costs in this budget,” Fitch said noting it will closely monitor future spending plans.

The Illinois Supreme Court’s recent rejection of a challenge to repayment of $14 billion of state GOs also is mentioned by Fitch but it does not comment on whether that’s a positive factor.

Illinois has already reaped market rewards with its spread penalties narrowed this month to levels in line with its ratings for the first time in years as the state reaps the benefits of swelling tax revenues, federal cash and a market looking for scarce yield.

Here’s what the Federal Reserve’s 25 basis point interest rate hike means for your money
London Crowned World’s Leading Cryptocurrency Hub, According to Study
Aave deploys v3 on Ethereum after 10 months of testing on other networks
Rumor has it that Dogecoin could shift to proof-of-stake — What does that mean for miners?
Top Wall Street analysts like these stocks for maximum returns