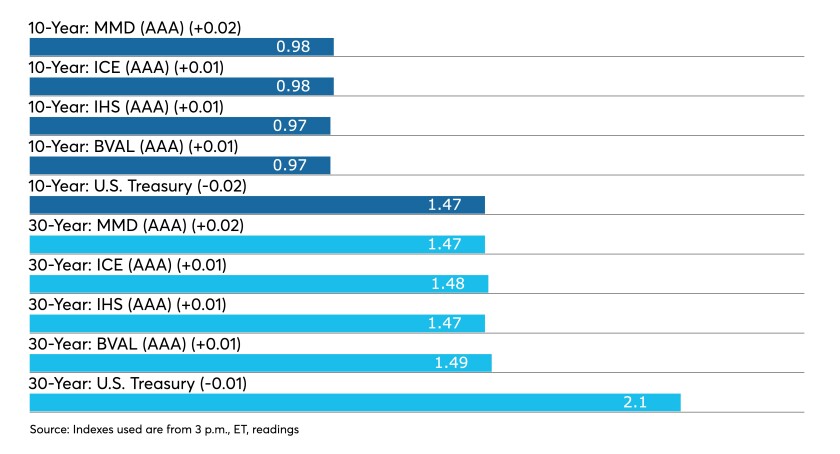 Municipals saw some weakness and yield pressure on certain primary deals in repricings following an up and down U.S. Treasury market.

Triple-A benchmark yields rose on bonds 10-years and out with one to two basis point cuts to scales. New issues saw a mixture of bumps and cuts on Tuesday, reflecting a general spread widening occurring from the start of the month. Lower coupons persist on new issues outside 10 years.

Despite the looming quarter end, “which would normally support stronger bidding, last week’s price trends may persist in the near term, in particular if accounts look to take gains or raise cash from high grades” for month/quarter end, said Matt Fabian, partner at Municipal Market Analytics, in a weekly Outlook report.

“This is not a market with well-identified secondary demand just behind current clearing levels,” he said. “Note how yields rose after Wednesday’s spike in net buying interest” — $8.7 billion, the highest year-to-date — “perhaps on weaker demand from trading-oriented primary syndicates versus going-away buyers.”

Price talk on $300 million of Yale University revenue bonds for the State of Connecticut Health and Educational Facilities Authority (Aaa/AAA//) saw bonds in 7/2035 with mandatory tender on 7/12/2024 yield 0.45%, noncall. Barclays Capital Inc. will run the books on the deal scheduled to price Wednesday.

“As a municipal market subsector, HY has grown to 13% of the outstanding bond market (by par) presently, from 10% last year and, more or less, the last five years,” Fabian said. “That growth has been afforded, if not driven by, steadily positive mutual fund inflows and surprisingly low default rates after the first few months of the pandemic.”

High-yield inflows have hit records this year, with the highest reported on April 14 at $1.28 billion, with many weeks seeing $500 million-plus. A hunt for yield and an investor willingness to support that sector has been fueling its success.

Default rates have depended — and will likely continue to depend — “on a deep and strong lending interest that includes rescue financings for troubled projects. Because borrowers needing completion or working capital cash are, all else equal, less rate sensitive, this effective ‘credit strength’ in HY should outlast even a moderate rise in yields,” Fabian said.

Economy
Regional manufacturing and services surveys suggest an economy recovering, while prices and employment issues suggest consumers may continue to see inflationary pressures in the near term.

The regional surveys are “consistent with what we are seeing and hearing at the national level,” he said. “General business activity has increased and continues to show an economic recovery well underway but employment challenges remain and higher input costs and order backlogs continue to point to higher costs for business and, potentially, consumers in the near term.”

The Philadelphia region’s non-manufacturing business activity index jumped to 59.6 in June from 36.9 in May, while at the firm level, the index soared to 56.7 from 22.1 in May — the highest reading since March 2012.

IFR Markets expected a 24.0 read on the firm level and a 37.5 read regionally.

Also released Tuesday, Richmond Federal Reserve manufacturing index increased to 22 in June from 18 the prior month.

IFR estimated a reading of 20.

The number of employees index fell to 19 from 25.

Activity in the Richmond Fed region’s service sector “saw growth” in June, even though the revenues index decreased to 25 from 29 in May.

IFR anticipated a reading of 32.

The demand index slipped to 41 in June from 43 in May.

“Growth of prices paid outpaced that of prices received, but contacts expected the gap between them to narrow in the near future,” said the report.

The number of employees index grew to 13 from 10, but respondents reported struggling to hire skilled workers.

Separately, existing home sales slipped 0.9% to a seasonally adjusted annual rate of 5.80 million, from an unrevised rate of 5.85 million in April.

“Lack of inventory continues to be the overwhelming factor holding back home sales,” said NAR chief economist Lawrence Yun. “But falling affordability is simply squeezing some first-time buyers out of the market.”

“The housing market has a long way to go but is now on the right trajectory,” McLaughlin said. “I wouldn’t expect a big shift either way next month, if it is down again, I don’t think it will be more of a decline than we saw in May and if it turns positive for the first time in five months, it won’t be more than a 2% gain.”

American Dream mall misses another debt payment
In monster quakes aftermath, a race to save lives as survivors grapple with their loss
Directional Vertical Strategy with Protection from a Shorter Duration Vertical (Members Preview)
Nordstrom shares surge as investor Ryan Cohen takes stake: report
New map of the universe’s matter reveals a possible hole in our understanding of the cosmos