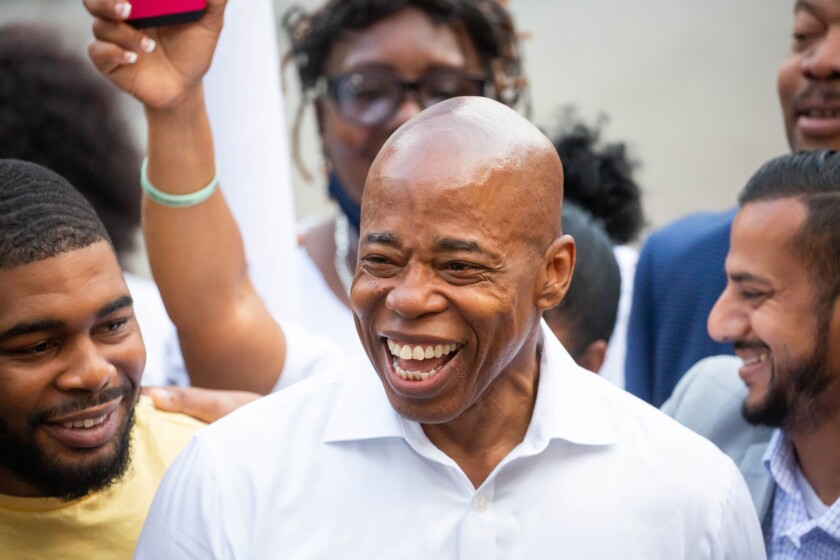 It could take weeks for the city’s Board of Elections to determine a winner. The new system allows voters to pick up to five choices by order.

“We know this is going to be layers,” said Adams, a retired police captain. “But New York City said ‘our first choice is Eric Adams.’ ”

Civil-rights advocate Maya Wiley and former city sanitation commissioner Kathryn Garcia followed with 21.8% and 20.4%, with 90% of precincts reporting. Former presidential hopeful Andrew Yang, an early front runner, conceded after finishing fourth with 11.6%, according to city Board of Elections statistics.

“This campaign has been about exceeding expectations,” Garcia said.

The Democratic winner will face Republican Curtis Sliwa in the November general election. Sliwa, founder of the Guardian Angels and a former radio talk-show host, totaled 68.9%, trouncing Fernando Mateo, president of the New York State Federation of Taxi Drivers and a spokesman for the United Bodegas of America.

Since no Democratic candidate totaled at least 50%, the city’s Board of Elections will hold the second round of counting next week.

“This will be about opening up the twos and the threes,” Garcia told supporters in Brooklyn’s Bushwick neighborhood. “We’re not going to know a lot more tonight.”

Podcast, Part 2: Burton, Gelinas, Rein and Figliola discuss what the next mayor will inherit.

Daby Carreras and Paul Rodriguez are the Republican and Conservative Party candidates for comptroller, respectively.

Ranked choice was a major wrinkle, though not the only one in this most unusual campaign. It featured a rare midsummer primary just as the city is emerging from the COVID-19 pandemic; a wildly diverse field of candidates; and a steep spike in crime.

Under ranked choice, the last-place candidate is eliminated at the end of each round and voters who chose that candidate will have their vote counted for their next choice.

At the end of each round, the last-place candidate is eliminated and voters who chose that candidate now have their vote counted for their next choice.

Votes are counted for second choice only if a voter’s first choice is eliminated. This process continues until there are two candidates left. The candidate with the most votes wins.

Voters approved ranked choice two years ago among a series of changes to the city charter.

“Ranked-choice voting is pretty confusing,” said Nicole Gelinas, a senior fellow with the Manhattan Institute for Policy Research. “It’s even a little bit confusing to experts in this field.

“If people split their first-choice votes, but everyone goes with this sort of amiable nice guy or gal who becomes everyone’s second choice, is that a good thing to vie for or not?”