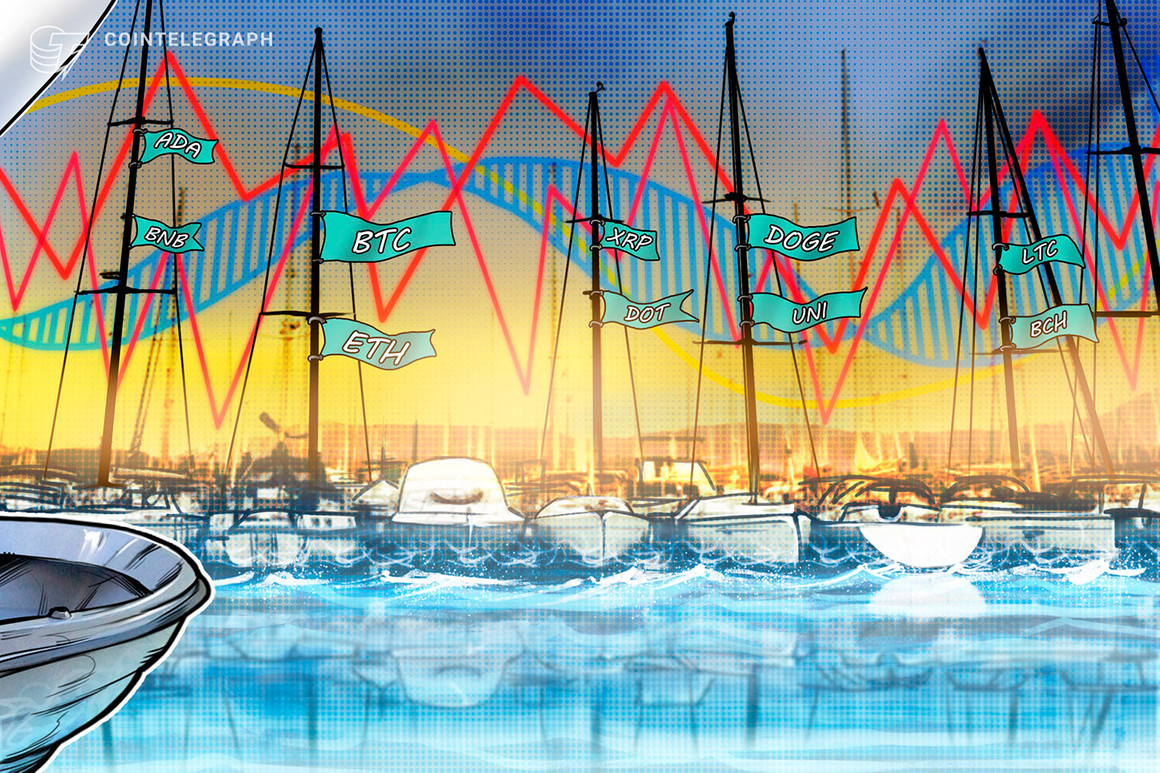 In a bearish environment, traders latch on to every bit of negative news and make that a an excuse to sell. Bitcoin (BTC) dropped over $1,000 within a few minutes as news hit the stands that the third-largest Chinese bank, the Agricultural Bank of China, will not allow the use of its services for crypto transactions.

Although the bank later deleted its anti-crypto statement, the damage was already done. Similarly, traders have latched on to the news that the Chinese crackdown on Bitcoin miners and this has resulted in the hash rate dropping to an 8-month low.

While this may be a negative in the short term, several analysts believe this is a positive development for the long term. “The ‘China-dominated’ Bitcoin mining era may be coming to an end,” said Alex Gladstein, chief strategy officer of the Human Rights Foundation. As mining activity shifts to other user-friendly jurisdictions, the network is likely to flourish.

Will MicroStrategy’s purchase attract other institutional investors and result in a relief rally? Let’s study the charts of the top-10 cryptocurrencies to find out.

Bitcoin completed the dreaded death cross on June 19 and this seems to have attracted further selling from the bears. The sellers have pulled the price down to the critical support at $31,000 today.

The bulls had successfully defended the $31,000 support on May 23 and again on June 8. Therefore, the level may again attract buying from the aggressive bulls. The relative strength index (RSI) is attempting to form a bullish divergence, which is another positive sign.

If the price rebounds off $31,000, the BTC/USDT pair will attempt to rise to $42,451.67. This could keep the pair range-bound between these two levels for a few more days.

On the upside, the rally is likely to face resistance at the 50-day simple moving average ($41,904). If the pair turns down from this resistance, the bears will again try to sink the price below $31,000.

Ether (ETH) broke below the symmetrical triangle pattern on June 18. This indicated that the consolidation of the past few days has resolved in favor of the bears. Sustained selling has pulled the price down to the 200-day SMA ($1,870).

The bulls will try to defend the zone between the 200-day SMA and the May 23 low at $1,728.74. If the price rebounds off this zone, the bulls will again try to push the price back into the triangle. If they manage to do that, it will suggest that buyers are accumulating at lower levels.

Binance Coin (BNB) broke below the uptrend line on June 18 and the bears are currently attempting to sink the price below the $291.06 support.

If they succeed, the BNB/USDT pair could challenge the 200-day SMA ($261). This is an important support to watch out for because the bulls had aggressively defended this support on May 21.

If the price rebounds off the 200-day SMA, the pair could rise to the downtrend line. A break above this resistance could clear the path for an up-move to $379.58 and then $433.

Cardano (ADA) has dropped below the critical support at $1.33 today. If bears sustain the price below this level, the altcoin could continue its decline and reach the next major support at $1.

The bulls are likely to defend the $1 support aggressively as the 200-day SMA ($0.98) is just below this level. If the price rebounds off this level, the ADA/USDT pair could rise to $1.33 where the bears may mount a stiff resistance.

If the price turns down from this level, it will suggest that the sentiment has turned negative and traders are selling on rallies. A break below the 200-day SMA could open the doors for a further fall to $0.80 and then $0.68.

This negative view will invalidate if the price turns up from the current level and rises above the 50-day SMA ($1.62).

If bears sink the price below $0.65, the selling could intensify and the XRP/USDT pair may drop to the next support at $0.43. The downsloping 50-day SMA ($1.09) and the RSI near the oversold zone suggest that sellers are in command.

Conversely, if the price rebounds off $0.65, the buyers will make one more attempt to push and sustain the price above $0.75. If they manage to do that, it will suggest accumulation at lower levels. The pair may then rise to $0.93 and then to $1.07.

Dogecoin (DOGE) broke below the neckline of a large head and shoulders pattern on June 18 and has continued lower. The bulls will now try to defend the $0.21 support aggressively.

If the price rebounds off $0.21, the bulls will attempt to push the price back above the neckline. If they succeed, it will indicate strong buying at lower levels. The DOGE/USDT pair may then rise to the 50-day SMA ($0.39).

The downsloping 50-day SMA ($28.22) and the RSI in the negative zone suggest that bears have the upper hand. The DOT/USDT pair could now drop to the critical support at $15, which has not been breached on a closing basis since Jan. 16.

Therefore, the bulls will attempt to defend the $15 support aggressively. A strong rebound off this level could push the price to $20 and then to the downtrend line. A breakout and close above this resistance will be the first sign of strength.

Contrary to this assumption, if bears sink the price below $15, the pair could witness further selling and decline to the next major support at $7.50.

Uniswap (UNI) broke below the 200-day SMA ($22.20) on June 18. The failure of the bulls to defend this critical support indicated that supply exceeds demand. The buyers tried to stage a recovery on June 20 but failed to push the price above the 200-day SMA.

That resulted in renewed selling today. The downsloping 50-day SMA ($28.63) and the RSI near the oversold zone suggest that bears are in command. If the sellers sink the price below $16.49, the UNI/USDT pair could drop to the critical support at $13.04.

Bitcoin Cash (BCH) has plunged below the $538.11 support, completing the descending triangle pattern. There is a minor support at $468.13 but if this support cracks, the selling could intensify further.

The 50-day SMA ($844) has been sloping down and the RSI is trading near the oversold territory, indicating advantage to the bears. If the sellers sink the price below $468.13, the BCH/USDT pair could slide to $400 and then $370.

This bearish view will invalidate if the price turns up and quickly rises above the 200-day SMA ($609). Such a move will suggest that the bulls aggressively bought at lower levels. The pair may then rise to the 50-day SMA.

Litecoin (LTC) broke below the support line on June 18, indicating a lack of urgency among the bulls to buy at that level. The failure to push the price back above the support line in the past two days has attracted further selling today.

The downsloping 50-day SMA ($222) and the RSI near the oversold territory indicate that bears are in control. The LTC/USDT pair could now retest the May 23 intraday low at $118.03. This level may act as a strong support but if the bears sink the price below it, the pair may drop to $100 and then to $70.

On the contrary, if the price rebounds off $118.03, the bulls will try to push the price to the downtrend line. A breakout and close above this level will be the first indication of strength. A trend change may be signaled after the bulls propel and sustain the price above the 50-day SMA.