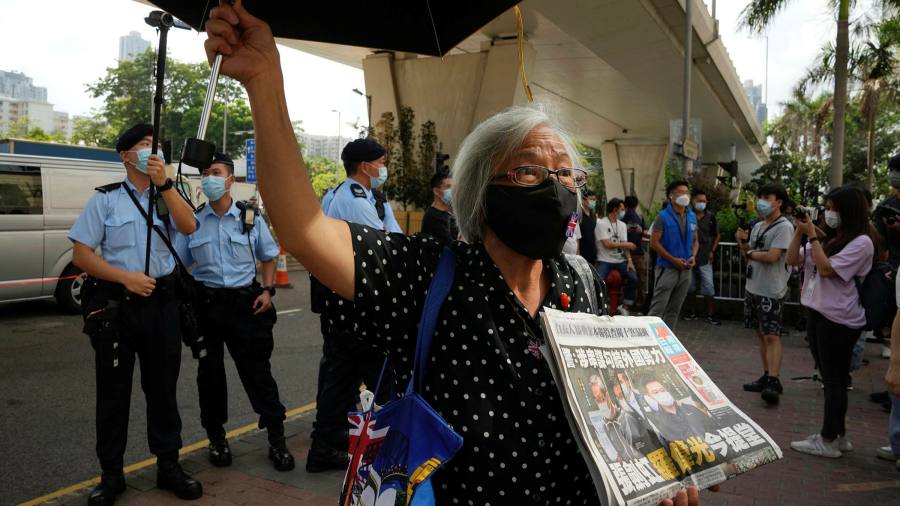 Hong Kong’s pro-democracy tabloid Apple Daily is on the verge of closure after its assets were frozen by the government last week, restricting its ability to operate.

The asset freeze follows the arrest of two of the newspaper’s senior executives who were charged under China’s tough national security law after a raid by 500 police officers on Apple Daily’s offices on June 17. The paper’s owner, Jimmy Lai, has already been jailed.

Critics say the actions mark a new low for press freedom in the Chinese territory, which was promised freedom of expression in the handover of the city from the UK to China in 1997. This changed after Beijing introduced a national security law that heralded a tough crackdown on civil society and politics.

The clampdown, aimed at quelling dissent on display during mass anti-government protests in 2019, has since extended to the previously freewheeling media. But police moves to charge Ryan Law, Apple Daily’s editor-in-chief, were the first time the national security law had been used directly against journalists.

The newspaper, one of the last papers left with a tough editorial stance against the Hong Kong government, has been repeatedly targeted by Chinese officials.

The board of Next Digital, Apple Daily’s parent company, met on Monday and will this week make a final decision on whether to continue publishing, Apple Daily reported. The company plans to submit an application to Hong Kong’s security bureau requesting that it unfreeze some of its assets in order to pay its staff.

The newspaper’s management has been unable to find other means to support its continued operation, said Mark Simon, a former senior adviser to Lai.

“Crowdfunding can’t work as banks are instructed not to process any payments. I have already heard from friends who have not been able to process payments to us,” he said.

If the authorities reject the application, in a decision expected by Friday, the last paper will be published on Saturday and the news website will cease operation by midnight on Friday. Staff will be allowed to quit immediately without notice today, according to an internal notice seen by the Financial Times.

“They [police] are nakedly completely destroying the last line of defence protecting the freedom of the press,” one journalist from Next Digital told the FT.

Law and Next Digital’s chief executive Cheung Kim-hung were denied bail on Saturday over the national security charges. They are accused of involvement in a conspiracy to encourage foreign countries to impose sanctions on Hong Kong by publishing articles that encouraged such a move, the police said.

Authorities have also frozen HK$18m (US$2.3m) from three companies linked to Apple Daily. Next Digital’s shares were still suspended on Monday after it announced a trading halt last Thursday.

John Lee, the security minister, has accused the paper of criminal activities and said the police action was not a threat to press freedom. “They are different from ordinary journalists,” he said last week. “Do not engage in any relations with them.”