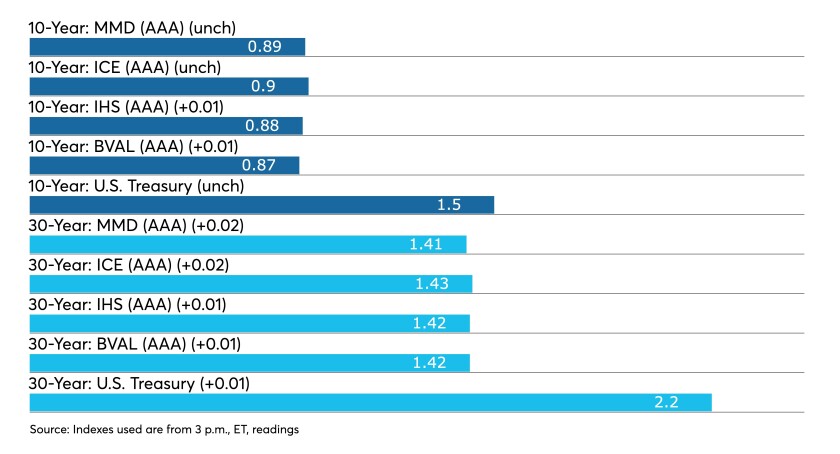 Municipals played catch up to U.S. Treasuries and were softer outside of 10 years, but the primary was the focus Tuesday with several large new issues repriced to lower and higher yields.

Triple-A benchmarks rose one to two basis points, USTs were little changed on the day in the 10-year and off a basis point on the 30, while equities lost ground as participants in all markets await tomorrow’s Federal Open Market Committee meeting.

In the primary, the New York City Housing Development Corp. bumped bonds inside 10 years and the San Mateo-Foster City Public Financing Authority saw one to five basis point bumps while issues from Colorado’s portion of the AdventHealth deal saw three- to five-basis-point cuts to its longer-dated maturities and the University of South Carolina saw its deal reprice to higher yields out long by as much as 10 basis points, indicative of the broader market’s aversion to such low rates.

“It’s the start of summer and I think there’s not a lot of new deals for the buyers to sink their teeth into,” a New York trader said. Although flows have been positive for months, the trader said rates on plain-vanilla high-quality bonds are too low and percentages are too tight.

“For the most part, munis are kind of unattractive and people are sitting on money, which makes it tough,” he added, noting even with some large volume weeks on the calendar of late, supply has not been enough.

“People don’t want to sell because they can’t replace their bonds, and on the other hand they don’t want to take the gains,” he said.

Secondary trading and scales
Trading showed a softer tone out longer, but steady up front.

Indicators abound
Tuesday’s data may not be indicative of where the economy is going and will likely be written off by the Federal Open Market Committee at its meeting.

The panel will continue to see the larger-than-expected producer price index gain as transitory, while a “soft” retail sales read for May, partly offset by an upward revision to April’s figures, won’t faze the central bank, analysts said.

“Because of the unique characteristics of this cycle and where we are in terms of returning to some semblance of normal consumer activity, [the retail sales report] may not be the best barometer for a few months,” according to Tim Quinlan, senior economist and Shannon Seery, economist at Wells Fargo Securities.

Retail sales fell 1.3% in May after an upwardly revised gain of 0.9% in April, originally reported as flat. Excluding autos sales slid 0.7% after an unrevised flat read in April.

Economists polled by IFR Markets predicted sales would decline 0.8%, with ex-autos ticking up 0.4%.

The report suggested consumers are shifting from online purchases and items for their homes to vacations and meals out, Quinlan and Seery said.

Berenberg chief economist for the U.S., Americas and Asia Mickey Levy said, “The April-May retail sales data suggest that, as the economy reopens, consumer spending on services (particularly food services and drinking places) is rebounding rapidly while sales of goods has cooled.”

Supply shortages and “insufficient inventories” are largely responsible for the slow sales of goods.

Separately, the producer price index gained 0.8% in May, after an unrevised gain of 0.6% in April and the core grew 0.7%, the same percentage increase as in April. Year-over-year PPI rose 6.6% and the core grew 4.8%.

Economists expected the headline number and the core to each rise 0.6% in the month and 6.3% and 4.8% for the annual growth.

As production costs accelerate, he said, “businesses have the flexibility provided by strong product demand to raise product prices and maintain margins. The pipeline for higher consumer inflation is still filling.”

Elsewhere, New York manufacturing expanded at a slower pace in June, according to the Federal Reserve Bank of New York. The general business conditions index fell to 17.4 in June from 24.3 in May. Economists anticipated a reading of 22.0.

Also released Tuesday, industrial production climbed 0.8% in May, after a downwardly revised increase of 0.1%, first reported as a 0.5% gain.

Also released, business inventories dipped 0.2% in April after a revised gain of 0.2% in March, originally reported as a 0.3% rise.

Finally, the National Association of Home Builders’ housing market index fell two points to 81 in June 83 in the prior month.

Economists estimated a reading of 83.

“While builders have adopted a variety of business strategies including price escalation clauses to deal with scarce building materials, labor and lots, unavoidable increases for new home prices are pushing some buyers to the sidelines,” said NAHB chief economist Robert Dietz. “Moreover, these supply-constraints are resulting in insufficient appraisals and making it more difficult for builders to access construction loans.”

The Yamhill County Hospital Authority (////) is set to price on Wednesday $132.6 million of revenue and refunding bonds. Ziegler is head underwriter.

The University of Illinois is set to sell $137.48 million of taxable facility systems revenue bonds at 11:30 a.m. eastern.

Christine Albano contributed to this report.

Prospects rise for NY charges against Trump in Stormy Daniels case
Sayreville councilwoman shot, killed outside her home
My Stock Dropped Over -20% – What Should I Do?
PRAY: Police Search For Answers After NJ Christian Councilwoman Killed Outside Her Home
Munis outperform UST rout after hotter-than-expected jobs report