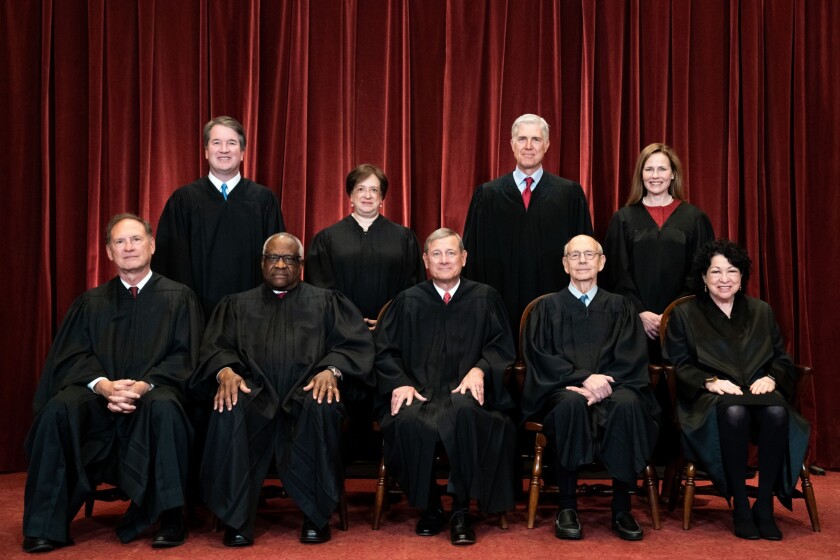 The nine justices of the Supreme Court are scheduled to huddle behind closed doors June 24 to decide whether a potentially landmark case involving the taxation of telework will be placed on their docket for the fall term.

The Biden administration last month asked the justices to not take this case involving temporary taxation of remote workers who live in New Hampshire and formerly worked in Massachusetts.

The federal government says the dispute doesn’t rise to the level of original jurisdiction involving issues such as sovereignty or state boundaries that requires a ruling by the high court.

Acting Solicitor General Elizabeth B. Prelogar also listed several other reasons for the Supreme Court to not take the case in a brief she filed on behalf of the Biden administration in response to the high court’s January invitation for the executive branch to weigh in.

“Although New Hampshire might prefer that its residents not pay personal income taxes to any government, an independent tax obligation falling on a state’s residents generally is not an injury to that state’s own sovereign prerogatives,” the acting solicitor general’s brief said.

New Hampshire, which filed the lawsuit last year in response to temporary Massachusetts rule promulgated because of the COVID-19 pandemic, said in a June 7 response that the federal government has no stake in the lawsuit.

New Hampshire, which has no state income tax of its own, filed the lawsuit after Massachusetts enacted a temporary rule continuing to impose Massachusetts income taxes on out-of-state commuters who began working from home because of the pandemic.

“Massachusetts has violated fundamental constitutional principles that restrain one state’s ability to tax income earned in another, and it is doing so on an unprecedented scale—a point underscored by the numerous amici supporting New Hampshire,” New Hampshire said earlier this month.

“That sort of temporary rule, applicable only to a subset of nonresidents based in part on their having satisfied a past condition, is unlikely to substantially affect long-term incentives about relocation or employment going forward,” the federal government’s brief said.

The case has fiscal implications for five other states that, in addition to Massachusetts, rely on income taxes paid by out-of-state commuters for a significant amount of their revenue.

Most notable among the five is New York, where New York City is an employment hub that draws hundreds of thousands of workers from northern New Jersey and southern Connecticut. Arkansas, Delaware, Nebraska, and Pennsylvania also have similar taxes on out-of-state workers.

New Hampshire estimates more than 103,000 of its residents, about 15% of its workforce, worked for Massachusetts-based companies in 2017.

New Jersey, Connecticut, Hawaii, and Iowa have filed a friend of the court brief in support of New Hampshire, noting many of their residents are in the same position of being forced to pay income taxes to another state where their job is based.

New Jersey said more than 400,000 of its residents and 78,000 from Connecticut commuted to jobs in New York City prior to the pandemic.

In Congress, bipartisan Senate legislation would set a 30-day in-state threshold before states could levy income taxes on nonresident workers.

The federal government also said that New Hampshire residents have the option of filing an abatement request with the Massachusetts Commissioner of Revenue. If they are not satisfied with the result, they can seek further review from the state’s Appellate Tax Board, and, if still unsatisfied, obtain judicial review in state court.

“Those individuals would be the most natural plaintiffs because they are directly affected by the challenged tax policy,” the federal government said. “Following review in Massachusetts administrative and judicial tribunals, such an individual could present to this court the same legal issues raised here. Proceeding through that alternative channel is particularly prudent for cases (like this one) involving personal income taxes.”

The acting solicitor general also wrote that in general “one state should not lightly be permitted to demand relief for its residents from another state when the individual residents themselves have an available means of redress.”