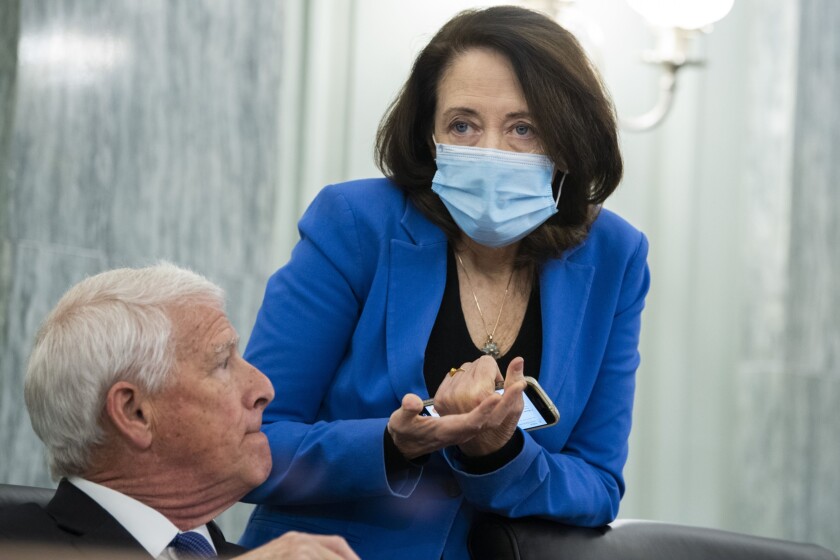 One involves a wide-ranging framework worked out by 10 senators while the other involves more narrowly tailored legislation that would spend $78 billion on passenger and freight rail.

The narrowly focused bill is the latest bipartisan piece of legislation to be developed in the Senate as that chamber moves toward a reauthorization of the Highway Trust Fund.

The 2015 Fixing America’s Surface Transportation Act was given a one-year extension through Sept. 30 of this year when the Trump administration failed last year to deliver on its promise of major infrastructure legislation.

But that bill is only one of four pieces the Senate needs.

The Senate Banking Housing and Urban Affairs Committee has jurisdiction over transit and has not yet acted this year on infrastructure legislation.

The Senate Finance Committee has jurisdiction over revenue measures and also has not yet acted on the tax law changes that will be needed, including what public finance sector officials hope will include reinstatement of tax-exempt advance refunding bonds and other favorable changes.

They are proposing $36 billion for rail, $27.8 billion for multimodal grant programs and $13 billion for safety programs. Their committee still needs to markup the bill, but the deal announced Thursday signals it will likely face few, if any, changes by the committee.

“This bill continues the Commerce Committee’s strong history of working across the aisle to find solutions that benefit all Americans,” Wicker said in a press statement. “The legislation will grow the economy by increasing authorized funding and making improvements to our rail, freight, ports, research, and safety programs. I thank Sen. Cantwell for her dedication to these issues, and I look forward to working with my colleagues to pass a comprehensive infrastructure package through the Senate.”

The Invest in America Act approved Thursday by the House Transportation and Infrastructure Committee in a mostly partisan vote by the Democratic majority includes $95 billion for freight and passenger rail, another $109 billion for transit and $343 billion for roads, bridges and safety.

Rep. Peter DeFazio, D-Ore., chairman of the House Transportation and Infrastructure Committee, said at the close of Thursday’s committee vote that he hopes the House can pass infrastructure legislation under regular order and hold conference negotiations with the Senate that will include input from Republicans.

Another possible avenue would be for lawmakers to agree to a comprehensive bipartisan deal with the Biden administration outside of the normal legislative process.

That possibility remains plausible because a bipartisan group of 10 senators have developed what media reports say is a $1.2 billion plan over eight years that they intend to present to the White House and their Senate colleagues. Although it would be paid for with no new taxes, it would include an inflation adjustment for the federal tax on gasoline. The proposal would include $579 billion in new spending above the federal budget baseline.

Sinema tweeted Thursday that the group has “reached a bipartisan agreement on a realistic, compromise framework to modernize our nation’s infrastructure and energy technologies.”

“This investment would be fully paid for and not include tax increases,” her tweet said, adding that they “remain optimistic that this can lay the groundwork to garner broad support from both parties and meet America’s infrastructure needs.”

The moon has a hidden tide that pulls on Earth’s magnetosphere, new study reveals
Nashville Estate Loved By Country Music Celebrities Is Up For Absolute Auction
Here’s How Much A $1,000 Investment In Tesla Stock Will Be Worth In 2030 If Ron Baron’s Price Target Hits
Putin To Give A Million Rubles Each To All Women Who Give Birth To 10 Or More Children
The Different Ways “Commission-Free” May Cost You Money