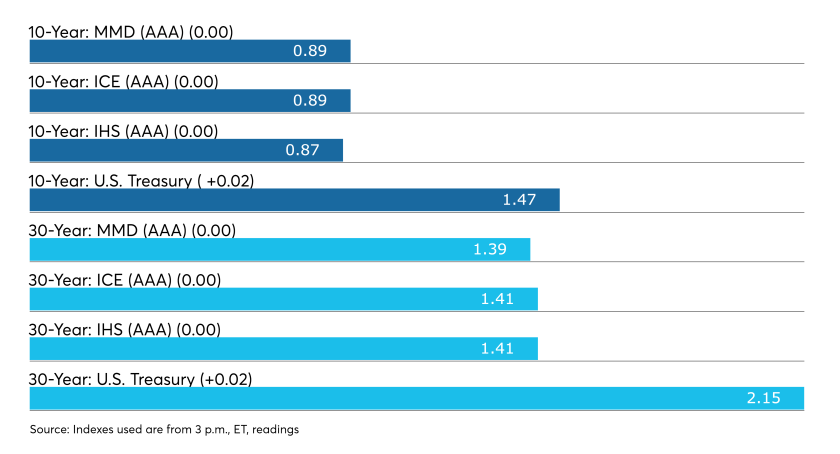 Municipal bonds were firm Friday as the market prepares for a healthy dose of new-issue supply while the Federal Reserve gets ready to decide the course of monetary policy in the face of rising inflation.

Yields on top-quality munis were flat on the AAA scales Friday; on the week, muni yields were as much as nine basis points lower.

Bond buyers are looking ahead to a robust new-issue calendar, led by deals from issuers in New York and Washington state and a large multi-state offering from AdventHealth.

IHS Ipreo estimates volume for the upcoming week at $11 billion. The calendar is composed of $8.39 billion of negotiated deals and $2.61 billion of competitive sales. Refinitiv estimates the total consists of $7.5 billion of tax-exempts and $3.5 billion of taxables. The year-to-date week sale average is $6.3 billion.

Supply crunch
The imbalance between supply and demand is still putting pressure on the municipal market as summer approaches, according to buyside sources.

“The technical theme continues to drive muni performance with net negative supply figures for the summer months expected to be quite sobering,” said Jeff Lipton, head of municipal credit and market strategy and municipal capital markets at Oppenheimer Inc.

“New issue supply is not likely to fill the void left by maturing securities and bond redemptions, despite somewhat heavier weekly calendars of late,” he said Friday.

“We think that to some extent, issuers are making up for an across-the-board decline in sales during May given a shift in issuer focus towards the infrastructure debate, as well as the new state and local funding allocations stemming from the American Rescue Plan and how best to incorporate this aid into the budgetary formation process,” Lipton continued.

With federal support flowing through the system and a stronger-than-anticipated recovery, Lipton believes many issuers are not necessarily strongly motivated to access the municipal capital markets in order to satisfy funding needs and respond to budgetary deficits.

“Against this backdrop, we do not foresee a loosening up in credit spreads or even a material reversal in the currently rich muni valuations that have characterized the market for some time now,” Lipton said, noting that when the technical drivers alter course, the firm will prepared to take advantage of likely investment opportunities.

“So far this month, Treasuries are extending their positive tone that was evident throughout May thanks to a more sanguine view of inflation with muni yields happy to go along for the ride, especially with compelling technicals,” Lipton said, adding that municipals can be expected to outperform Treasuries, particularly given the anticipated summertime net negative supply.

“With such a strong technical backdrop, we expect fund flows to remain decidedly positive with rather lofty amounts of sidelined cash awaiting investment guidance,” Lipton said.

Given the currently rich valuations, retail investors are demonstrating a degree of resistance as the municipal market grinds tighter, Lipton noted. “Supply constraints have made it challenging to buy bonds in the secondary market given a more limited product flow from the primary, thus impacting trading volume,” he said.

Institutional buyers with more pressing investment needs, meanwhile, cannot be too picky with respect to credit and structure given such technical factors, according to Lipton.

Rates outlook
On Tuesday, the Federal Open Market Committee will gather in Washington, D.C., for a two-day meeting.

Most market participants expect the FOMC to keep rates unchanged in the zero to 0 to 1/4% range, but it may indicate whether a tapering discussion is on the table. The summary of economic projections, or dot plot as it is known, will be also be released at the meeting.

Some Fed officials have said they may soon be “talking about tapering,” the reduction of buying or possible sell-off some of the bonds they have accumulated on the balance sheet.

Mark Haefele, UBS Global Wealth Management’s Chief Investment Officer, said he believes the U.S. central bank will give a lot of notice before any change in policy.

“If the U.S. economic recovery continues to accelerate to a sufficiently robust level into the summer, the Fed is expected to signal rolling back its asset purchases later this year,” he said. “But the actual tapering would only take place in 2022, and we believe markets have largely priced in this expectation.”

The FOMC will also be looking at inflationary pressures in the economy.

The Labor Department reported on Thursday that the consumer price index rose 0.6% in May, but on a year-over-year basis inflation at the consumer level is up 5.0%, the biggest 12-month increase since August 2008 and it has been trending higher each month since January.

“This meeting will include an updated set of economic projections, which may be more revealing than the policy statement itself,” IFR Markets said in a Friday report. “Still, we expect some meaningful changes to the statement, particularly in the outlook for the economy and inflation.”

Technical impacts
On the technical front, year-to-date performance numbers show that credit spread compression has been dominating, except for the high-grade short maturities, according to a new report from BofA Securities.

“For the high-grade long-end of the curve, lower coupons have done better since the end of February due to large bull flattening,” Yingchen Li and Ian Rogow, municipal research strategists at BofA, said in a report Friday. “We feel more comfortable picking up credit spreads than coupon spreads at this point.”

By rating, the BBB index’s year to date returns are strongest at 4.372%, the analysts noted. Among sectors, transportation returns is strongest at 3.022%, they added.

“Should muni rates reach a second peak in 3Q, investors can be more aggressive in pursuing coupon spreads across the curve,” they noted.

Meanwhile, the team reported issuance, returns, and flows — with month to date issuance being $11.6 billion as of June 9 — down 28% compared to the same period last year. Year to date issuance was $189.9 billion, up 9% versus last year.

Overall, challenges to keep on the radar include municipal market Fed Flow data, California’s wildfire risks, Texas’ legislation to address winter storms; tax migration, and 2020 pensions, according to the analysts.

Primary market
With the FOMC decision due out Wednesday, the lion’s share of the week’s bond sales will be offered on Tuesday and Thursday.

The financial advisor is PRAG and bond counsel are Orrick and Golden, Holley, James.

In the short-term sector, JPMorgan will price Riverside County, Calif.’s (NR/SP1+/F1+/) $340 million of tax and revenue anticipation notes on Tuesday.

In the competitive arena, the South Carolina Transportation Infrastructure Bank is selling $395.09 million of revenue refunding bonds in two offerings on Tuesday consisting of $340.18 million of Series 2021B bonds and $54.91 million of Series 2021A bonds. PFM Financial Advisors is the financial advisor; Burr Forman McNair is the bond counsel.

The report showed the gain was mainly recorded among middle and upper income households and for future economic prospects rather than current conditions.

“Stronger growth in the national economy was anticipated, with an all-time record number of consumers anticipating a net decline in unemployment,” according to the report. “Rising inflation remained a top concern of consumers, although the expected rate of inflation declined in early June.”