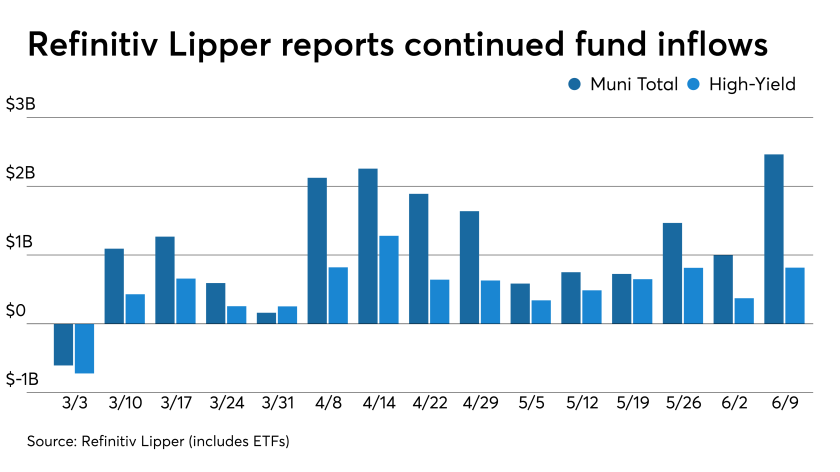 Municipal bonds were mostly steady Thursday after a report showing an unexpectedly high increase in consumer prices pushed U.S. Treasuries and stocks higher. Yields on 10- and 30-year munis were firm on the AAA scales while the 10-year benchmark Treasury yield fell to 1.46%, its lowest level since March 4.

For the 14th week in a row, investors felt bullish about municipal bond funds and continued to pour cash into them. Refinitiv Lipper reported $2.5 billion of inflows in the latest reporting period with high-yield muni funds seeing $816 million of inflows.

Demand unabated
With the market absorbing two billion-dollar deals this week, there seems to be good follow-through after Wednesday’s pricings, according to Timothy Barbera, managing director and head of fixed income sales and trading at Rice Financial.

“Supply versus continued inflows remain the key drivers of activity, “but the market is beginning to feel a bit soft at these continued low overall yields,” Barbera said.

Still, the market is thriving on the unabated cash and overall demand, he said.

“Continued inflows with cash needed to be put to work will continue to be the theme of the market for most — if not all — of the summer,” he said. “There is just so much cash coming into the funds versus available supply.”

RBC Capital Markets priced for institutions with three to seven basis point bumps from retail scales $439.4 million of power system revenue refunding bonds for the Department of Water and Power of the City of Los Angeles (Aa2//AA-/AA).

Municipals posted another month of positive performance in May amid a backdrop of range bound interest rates and favorable supply-demand dynamics, as fiscal stimulus and infrastructure uncertainty limited municipal issuance, the analysts wrote.

Valuations remained historically rich, particularly in the intermediate and long end of the yield curve, encouraged by the prospect of higher taxes, they remarked.

“Supply underwhelmed lofty expectations as issuers displayed patience amid diminished near-term borrowing needs and uncertainty on the Biden administration’s infrastructure plan,” Hayes, Schwartz and Carney said. Issuance totaled $34 billion, down -3% month-over-month but 9% above the 5-year average. “The cadence remained supportive with the market avoiding consecutive weeks of above-average supply,” they noted, as deals were oversubscribed 7.9 times on average versus seven times in April.

“We maintain a constructive view on the asset class as we enter the historically favorable summer seasonal period,” they added.

“Amid a backdrop of already solid fundamentals, we anticipate that the market will benefit from continued robust demand for tax shelter and a large net negative supply environment in which reinvestment income — calls, coupons and maturities — outpaces issuance,” they continued.

Over the past five years, the asset class has averaged total returns of 1.67% during the three-month period of June through August, they pointed out.

Refinitiv Lipper reports $2.5B inflow
In the week ended June 9, weekly reporting tax-exempt mutual funds saw $2.462 million of inflows, according to Refinitiv Lipper. It followed an inflow of $997.358 million in the previous week.

The four-week moving average remained positive at $1.413 billion, after being in the green at $984.400 million in the previous week.

Thursday’s economic indicators
Inflation in America continued to rise, with May’s report on prices showing gains higher than expected across the board even as fewer people filed for unemployment benefits last week, a sign of growing strength in the labor market.

“We are entering what will no doubt be a long, hot summer as consumers continue to spend faster than most producers and service providers can keep up. The report reminds us of the transitory nature of price hikes and how consumers react,” Diane Swonk, chief economist at GrantThornton, said in a market note.

The consumer price index increased a seasonally adjusted 0.6% in May after rising 0.8% in April, the Labor Department reported.

Economists surveyed by IFR Markets had expected the CPI to rise 0.4% in May.

The CPI core rate, minus the volatile food and energy components, rose 0.7% last month after a 0.9% gain in April. The core rate was up 3.8% on a year-over-year basis, the largest 12-month gain since June 1992.

Economists polled by IFR Markets had expected the core rate to rise by 0.4% in May.

“A handful of categories most closely tied to the reopening of the service sector and supply bottlenecks once again accounted for an outsized share of the rise,” according to Wells Fargo. “But don’t fully wave away May’s strength. The long-awaited pickup in housing costs has arrived, which will support firm gains even after the current surge of pent-up demand and the most acute supply issues subside.”

“While the upside surprise in CPI inflation in May was notable in and of itself, a key underlying detail was the rise in shelter prices — rents rose 0.24% in May, the largest increase since March 2020, and owners’ equivalent rent rose 0.31% in May, the largest increase since June 2019,” according to Morgan Stanley. “Both of these components make up part of the more persistent inflationary pressure we had been expecting to form over the course of this year and into next year, keeping the overall inflation profile supported as transitory factors roll out, but the larger-than-expected increase in May suggests that support is both earlier and perhaps even somewhat greater than expected.”

The Federal Reserve will be closely scrutinizing the report for signs of sustained inflation pressures.

“The outsized gains in a few select sectors support the Fed’s view that the current degree of price pressures are temporary,” Wells Fargo said. “However, we see signs of inflationary pressures broadening out, which we believe will keep monthly price gains from merely falling back to their pre-pandemic trend after the current flurry of activity.”

But don’t expect any drastic action from the Fed, yet.

“The recent onslaught of consumer price inflation and strengthening wage gains will likely push the FOMC to ‘talk about talking about’ tapering at its meeting next week. But that doesn’t mean plans to scale back asset purchases are imminent,” Wells Fargo said. “Given the unique factors currently driving up inflation, we believe the Fed still wants a clearer view on how the dust will settle — or will not settle — on inflation later this year, and see the recovery in payrolls move further along.”

Morgan Stanley said the Fed will look at all the data.

“We have noted that recent inflation data likely necessitates an upward revision to the FOMC’s near-term inflation forecasts in the June SEP, and this latest data certainly reinforces that going into next week,” Morgan Stanley said.

“Prices are what brings demand and supply into line over time. It underscores the complexity of the hurdles that low-wage workers face in their decisions to return to work; rising commuting costs are narrowing the areas where they can search for work,” she said.

Turning to the employment picture, Labor reported that first time claims for unemployment compensation in the week ended June 5 declined 9,000 to 376,000 from 385,000 in the previous week.

It was the lowest level for seasonally adjusted initial jobless claims since March 14, 2020, when 256,000 claims were filed.

Economists surveyed by IFR Markets had expected 371,000 claims to have been registered in the latest reporting week.

“This confirms a fast recovery in the labor market. Recent NFP and JOLTS job reports show record job openings and labor shortages in many sectors. Today’s report confirms it,” said Zhiwei Ren, managing director and portfolio manager at Penn Mutual Asset Management. “For market participants, there is little doubt that the labor market is robust and will improve further over the coming months.”

The largest increases in initial claims for the week ending May 29 were in Pennsylvania, Illinois, Kentucky, Missouri and Michigan, while the largest decreases were in Texas, Oregon, Virginia, Florida and Washington.

“This bond sale allows us to build and update various infrastructure projects and create good-paying jobs for hardworking Georgians across the state,” Georgia Gov. Brian Kemp said Wednesday. “Due to low interest rates here in the Peach State, we will be saving taxpayer dollars for years to come while also ensuring Georgia continues to lead the nation in economic recovery.”

Diana Pope, Director of the commission’s investment division, said the state was very pleased with the bids it received.

“These were the result of the state’s strong credit position and prudent financial management, all of which was reflected in the pre-sale interest, the variety and type of accounts participating, and the post-sale follow-through,” Pope said. “As we approached the sale date, the bond market was demonstrating a lot of strength, but it proved to be even stronger than we were expecting. One bidder mentioned that they have not seen as great a demand or reception as they saw on our bonds.”

According to the West Virginia Parkways Authority, its sale of $333 million bonds Wednesday saw $3.8 billion in orders from nearly 90 unique investors. Being 11.6-times oversubscribed allowed the authority to drive down the interest rate on the bonds and secure a 2.62% all-in cost of borrowing.

The demand for the 30-year bonds was able to produce a $90 million premium on the issuance for a total bond sale of $423 million, the authority said.

The bonds were issued under Gov. Jim Justice’s “Roads To Prosperity” program.

“I am thrilled with the response from Wall Street for our bonds,” said Jeff Miller, the authority’s executive director. “The toll revenue bond proceeds will go off the Turnpike to fund West Virginia Division of Highways projects in the 10 counties surrounding the Turnpike. We are so pleased to be able to partner with the WVDOH to provide them the funding for important projects in those counties.”

How the spy balloon popped a US-China rapprochement
Texas school bond guarantee program capacity falls below $27 million
Putin To Give A Million Rubles Each To All Women Who Give Birth To 10 Or More Children
Gautam Adani calls off $2.5 billion equity sale as regulatory concerns grow
Silvergate Capital shares jump after BlackRock reports increased stake in the crypto bank