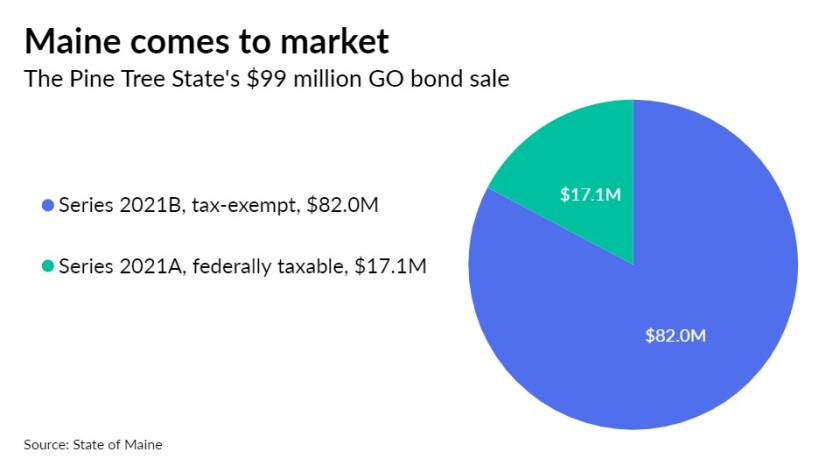 Armed with strong rating agency reviews and with an eye toward infrastructure and workforce development, Maine expects to come to market the week of June 7 with a $99 million negotiated general obligation bond sale.

There is no early retail period.

“June is a traditional time for us to go to the market,” state Treasurer Henry Beck said.

“We have a great credit quality,” Beck said. “We have never missed a payment. We will pay you back.”

Also targeted are the University of Maine and community college systems; a Department of Environmental Protection competitive grant program to upgrade municipal culverts at stream crossings; and highway and bridge projects.

Community college enhancements are important, Beck said, “because those institutions are so vital to mitigating workforce challenges.” About $2.2 million of sale proceeds will backstop upgrades to a welding lab, a teaching center and other various building improvements for the system.

Maine has maintained its high ratings throughout the pandemic, with S&P and Moody’s reaffirming their ratings in May 2020 as the coronavirus escalated. According to S&P, pandemic effects prompted downward moves for at least 22 state ratings and outlooks.

“These stable ratings demonstrate that Maine is in a solid financial position, our economy is recovering and our state is a worthy investment,” Gov. Janet Mills said.

Moody’s praised her administration’s climate-change initiatives for the coastal state, which included the establishment of a climate council that developed a four-year plan to meet emission reduction goals and ensure climate change resiliency statewide.

Her proposals follow up on the council’s “Maine Won’t Wait” report.

According to S&P, Maine’s demographic profile exposes the state to social risk over time.

“Maine is among the oldest population in the nation, although the state’s population has increased in the past four years as management reports increasing net in-migration,” S&P said.

States reliant on older and higher-income households, S&P said, are more likely to experience revenue declines, due in part to falling incomes at retirement.

The state has not issued tax anticipation notes since fiscal 2006.

S&P based its rating on the state’s history of making mid-biennium budget adjustments when necessary; recent increases to its rainy-day fund; and access to a large cash pool that provides additional liquidity for the general fund.

“I am pleased [that] S&P recognized the strength of the treasurer’s cash pool, which we have carefully managed during this turbulent time,” Beck said.

The cash pool represents investments permissible by Maine statute and consists of excess money in the state treasury that is “not needed to meet current obligations.”

The treasurer’s office pools and invests state funds and funds of state component units. Generally, most securities are held to maturity or called when the par value of the security is received.

As of June 30, 2020, the cost of purchased investments in the pool was $2.92 billion with a weighted average effective maturity of 244 days.

In April, Maine’s nonpartisan Revenue Forecasting Committee upgraded the state’s general fund revenue forecast to a level surpassing the amount of revenue that it projected before the beginning of the pandemic. The latest calls for an extra $940 million in tax revenue over the next two fiscal years.

The budget stabilization or rainy-day fund has risen under Mills’ tenure by more than $50 million, to a record $267.9 million. Mills has proposed depositing another $52 million into the fund.

The positive ratings “are a testament to this administration’s disciplined budgeting approach and the impact of federal relief,” said Kirsten Figueroa, commissioner for the Department of Administrative & Financial Services. “Coupled with low interest rates, Maine is financially well positioned to undertake a bond offering.”

Beck, Figueroa and other high-ranking state officials briefed Moody’s and S&P via telephone on May 18.

Volcker Alliance, in its report card on the states, gave Maine a B for fiscal 2015 through 2019 in all five of its budget categories: budget forecasting, budget maneuvers, budget transparency, legacy costs and reserve funds.

Its most notable improvement over the period, according to the think tank, was in legacy costs, which includes public worker pensions and other postemployment benefits, primarily healthcare.

Maine started making actuarially determined OPEB contributions in 2017 and exceeded the actuarial sum by $9.4 million in 2018. The actions contrast with the 27 states that failed to provide actuarial OPEB funding.

Also helping the grade was Maine’s 84% pension funding ratio in 2019, 13 percentage points above the total for all states.

State lawmakers have returned to Augusta for the final push on the next two-year budget, which will begin July 1. Mills’ “Part 2” budget, which raises her proposal to $8.8 billion, would add $187 million to public-school funding to pay 55% of local education costs.

Maine voters approved that funding ratio in a 2004 referendum.

Gilead’s Stock is on Sale: Should You Buy?
Data shows pro Bitcoin traders want to feel bullish, but the rally to $23K wasn’t enough
Eerily perfect galaxy-shaped spiral appears over Hawaii. What is it?
The Federal Reserve is likely to hike interest rates again. What that means for you
Bill Gates Responds To Jeffrey Epstein Ties For ‘Over Hundredth Time’: ‘I Shouldn’t Have Had Dinners With Him’