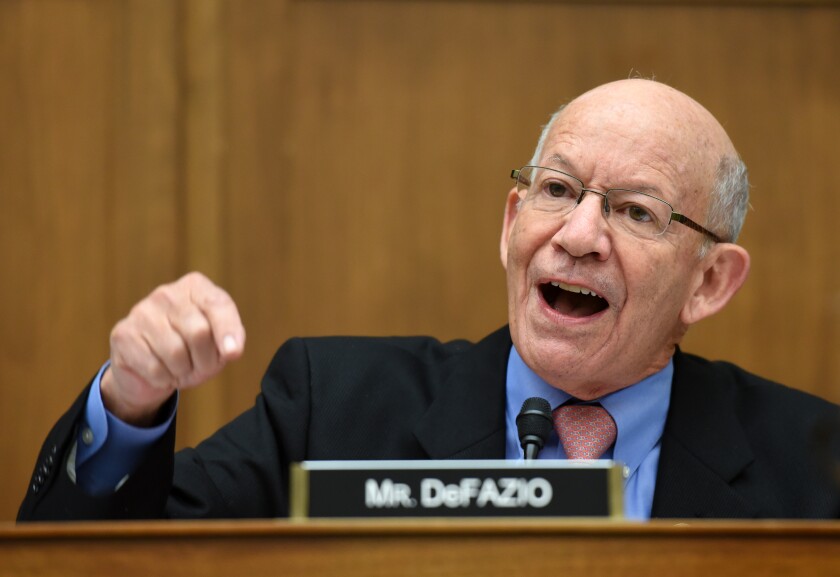 House Democrats have introduced a five-year $547 billion surface transportation reauthorization bill that the committee will consider next week.

House Transportation and Infrastructure Committee Chair Peter DeFazio, D-Ore. unveiled their INVEST in America Act Friday. The bill would provide federal funding for roads, bridges, mass transit, and rail infrastructure which is important for many issuers of municipal bonds that rely on the stability of that federal funding when planning their budgets. The bill would also fund and make certain “streamlining” changes to the popular Transportation Infrastructure Finance and Innovation (TIFIA) loan program.

“The INVEST in America Act puts a core piece of President Biden’s American Jobs Plan into legislative text—seizing this once-in-a-generation opportunity to move our transportation planning out of the 1950s and toward our clean energy future,” DeFazio said in a release.

The bill represents the House version of the surface transportation portion of the Biden White House’s expansive infrastructure and jobs plan. There is added pressure on this front because current federal aid highway spending is set to expire Sept. 30. The rollout of DeFazio’s bill comes less than two weeks after the Senate Environment and Public Works Committee unanimously passed its $304.5 billion surface bill.

The INVEST in America Act would dedicate $343 billion to road and bridge funding, $109 billion to transit, and $95 billion for passenger and freight rail.

“AASHTO has consistently called for the federal surface transportation reauthorization to be the centerpiece of any infrastructure package.” said Jim Tymon, executive director of the American Association of State Highway and Transportation Officials. “This five-year bill, which provides funding growth and much-needed certainty for state DOTs, is a key step toward that goal.”

“AASHTO strongly encourages Democrats and Republicans in the House and Senate to work together to enact a bipartisan reauthorization bill by Sept. 30 that maintains current formula-based funding to states as the foundation of the federal surface transportation program. This proven approach will provide the necessary flexibility for rural, urban and suburban areas to advance important national priorities including equity; resiliency; carbon reduction; safety for all roadway users; improving project delivery; and, maintaining and improving their assets.”

The bill would dedicate $250 million each year to the TIFIA program from fiscal years 2023 through 2026. The Transportation Infrastructure Finance and Innovation Act program, often used in conjunction with bond financing, gives issuers access to federal loans, loan guarantees, and standby lines of credit for eligible projects.

The bill incorporates a change reflected in bipartisan legislation introduced in both the House and Senate, in which the requirement that a borrower obtain multiple investment-grade ratings unless the credit instrument is under $75 million would be changed to a $150 million threshold. Proponents of this change have said that the higher floor will encourage greater participation in the program and cut red tape for lower-risk projects.

Finding the money for surface transportation and other infrastructure priorities is not the realm of DeFazio’s committee, but rather the tax-writing Ways and Means Committee. Ways and Means Chair Richard Neal, D-Mass., is considered an ally of the municipal finance community and a champion of tax provisions sought by muni advocates. Among those are the return of tax-exempt advance refunding and direct-pay Build America Bonds, and muni advocates are hopeful those goals will be achieved as part of the tax changes made to support Biden’s infrastructure plan.

The House debate on this bill is not likely to be the warm and fuzzy affair that occurred in the Senate last month, as House Republicans are already blasting the legislation as wasteful and wholly partisan.

“The Majority’s new ‘My Way or the Highway Bill 2.0’ doubles down on the same mandates, restrictive policies, and costly diversions of infrastructure resources that led to last year’s failure to provide long-term investments in America’s roads and bridges,” read a joint statement from top Republicans on the Transportation Committee.

“Instead of working with Republicans to find common ground on a bill that could earn strong bipartisan support – something our Senate counterparts did successfully last month – this bill moves even further to the left to appease the most progressive members in the Majority’s party.”

House Democrats have the numbers to pass legislation without Republican support, though top Democrats have generally expressed the desire to get at least some Republicans on board. Differences between the House and Senate versions of the bill will need to be hammered out before a final version could eventually be passed by both chambers and sent to Biden for his signature.