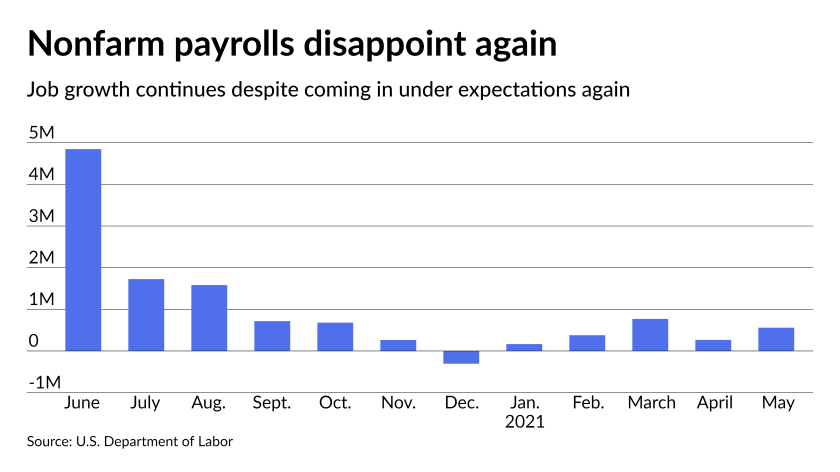 The Labor Department said nonfarm payrolls rose 559,000 in May as the jobless rate fell to 5.8% from 6.1%. The numbers showed slow but steady strength in the labor market, but came in under some economists’ expectations. IFR Markets had predicted an increase of 650,000 jobs while a Bloomberg survey forecast a rise of 661,000.

President Joe Biden touted the strength in the data.

“Today’s jobs report shows historic progress for American families and the American economy,” he said in a Tweet on Friday. “We added 559,000 jobs in May, created a record 2 million jobs in our first four months and unemployment is at its lowest level since the pandemic started. America is on the move again.”

Yields on top-quality bonds fell on the long-end of the AAA scales by as much as two basis points. On the week, muni yields were little changed.

Looking ahead to the new week, bond buyers will see a robust new-issue calendar, led by a big taxable healthcare deal from Kaiser Permanente in California.

IHS Ipreo estimates volume at $10.15 billion in a calendar composed of $6.95 billion of negotiated deals and $3.20 billion of competitive sales. Refinitiv MMD estimates the total consists of $9.53 billion of tax-exempts and $620 million of taxables. The year-to-date weekly sale average is $6 billion.

The deal is set to be priced by Goldman Sachs and its size is dependent upon market conditions.

Sources told The Bond Buyer that if the taxable market is favorable then up to $2.65 billion will be sold as corporate CUSIP bonds with 20- and 30-year bullet maturities. If the underwriter decides the issuer could get a better deal in the tax-exempt market, Goldman will reduce the taxable amount by a like amount to price up to $700 million of Series 2022A&B tax-exempt fixed-rate put bonds, with maturities from five- to 10-years with a final 2042 due date, for the California Statewide Communities Development Authority with Kaiser Foundations Hospital as the obligor.

In the competitive arena, Georgia (Aaa/AAA/AAA/NR) is selling $1.1 billion of tax-exempt and taxable general obligation bonds on Tuesday to provide funding for state capital projects.

Public Resources Advisory Group and Terminus Municipal Advisors are the financial advisors. Gray Pannell & Woodward is the bond counsel and Kutak Rock is the disclosure counsel.

In the short-term sector, Los Angeles County is coming to market with a $1 billion note deal. UBS Financial Services is set to price the Series 2021-2022 tax and revenue anticipation notes on Thursday.

What to expect this month
Looking ahead to the first full week in June, BofA Securities expects a flatter curve with narrower spreads.

“Demand overwhelms supply even more. We expect the muni curve to go flatter and spreads to grind lower,” according to a Friday report from BofA Global Research. “Total principal and coupon redemptions may run as high as $180 billion and mutual fund inflows as high as $30 billion for the June-August period.”

The analysts also noted the possibility of a Build America Bond-type issuance surge if an infrastructure plan is passed in Washington.

Deep dive into jobs data
Jobs are being created but, for various reasons people are still not coming back to the workforce, and that was highlighted in what some analysts called a disappointing jobs report for May.

“Payrolls have been growing at 540,000 per month over the last three months. This is a lot of job creation compared to our steady state mid-cycle estimate of 70,000 per month, but it still leaves us 6.5 million jobs short of full employment,” according to Brian Coulton, chief economist at Fitch Ratings. “It’s taking participation rates a bit longer to bounce back — and the BLS survey suggests pandemic related restrictions and concerns are still preventing 2.5 million from looking for work — but it’s quite hard to see this as a situation of labor shortage in the economy as a whole.”

Kevin Flanagan, head of fixed income strategy at WisdomTree, said that the lackluster report will now “buy some time” for the Federal Reserve and Chair Jerome Powell.

“There was mounting pressure on the Fed, we know where inflation is at but employment is still a long way off from maximum,” he said. “The Fed can now pump the brakes on the taper talk, Friday’s report was not a game changer but Powell can breathe a sigh of relief, for now.”

He noted that jobs are “flattening out” and it will be interesting to see how the Fed interprets the report. He expects people to start working again going into the summer.

“In some states, people are being incentivized to stay at home as they can make more money doing that than they would going to work,” he said. “Some states will start to break away from that, so the summer will be interesting. I see more people getting out of the house and moving back into the workforce.”

While payrolls came in under expectations the data still showed continued improvement in the job market, although at lower levels than earlier in the recovery, said Sameer Samana, senior global market strategist at Wells Fargo Investment Institute.

“The internals were also a bit weak, with manufacturing and private payrolls coming in shy of expectations, the participation rate ticking lower, and only slight improvements in the unemployment/underemployment rates,” he said.

Samana said the results reinforce the Fed’s patience approach to removing monetary stimulus. “Although they may begin talking about talking about tapering in the upcoming meetings,” he said.

“While volatility continues month to month — emphasizing the nature of living through a pandemic — this morning’s bounce in hiring is a welcome reminder not to focus too much on one single report,” said Stifel’s chief economist Lindsey Piegza. “There was already a strong underlying trend of hiring established before the May report. This morning’s increase only reinforces the sentiment of continued improvement as the recovery ages.”

She said the employment picture will continue to become clearer.

“The labor market is likely to continue to improve, diminishing both barriers and disincentives to return to the labor force and by extension, correcting labor supply shortages reported across the country,” she said.

Diane Swonk, chief economist at Grant Thornton, said that the bottom line is that the labor market is healing, but not as rapidly as the overall economy.

“Consumers are spending and businesses are reopening faster than many employees are able or willing to return to work,” she said. “A return of day care centers, summer camps and schools in August will all help alleviate those hurdles.”

According to Scott Ruesterholz, portfolio manager at Insight Investment, along with the difficulty in bringing employees back to work, wage growth continues to surprise to the upside, particularly in lower paying jobs.

“For instance, nonsupervisors in the leisure sector saw wages rise over 1% this month, bringing this year’s increase to over 8% — whether these wage gains persist after enhanced unemployment benefits lapse is highly uncertain, but the combination of only moderate job growth, lackluster labor force participation and faster wage growth point to a labor market that faces more supply constraints than one would expect looking solely at the unemployment rate.”

Also released on Friday, factory orders dropped 0.6% in April after a revised 1.4% climb in March, first reported as a 1.1% gain. IFR estimated orders to dip 0.5%. New factory orders minus transportation nudged up 0.5%, IFR expected an increase of 0.8%. Non-durable goods ticked up 0.1%; IFR anticipated that number to come in flat.

“While factory orders declined, the miss was due to the volatile transportation categories with core capital goods orders and shipments up solidly,” said Ruesterholz. “Manufacturers’ backlog of unfilled orders also continues to grow.”

He also noted that aside from the aerospace sector, many manufacturers’ output is “constrained by supply chains’ capacity rather than by a lack of demand, leading to growing backlogs.”

“Working through this should elongate the recovery in manufacturing output, likely providing a tailwind for growth into 2022,” he said. “While higher input and transportation costs may pressure margins a bit, the outlook for manufacturers is strong.”

Secondary market
Some notable trades on Friday as reported by ICE Data Services: