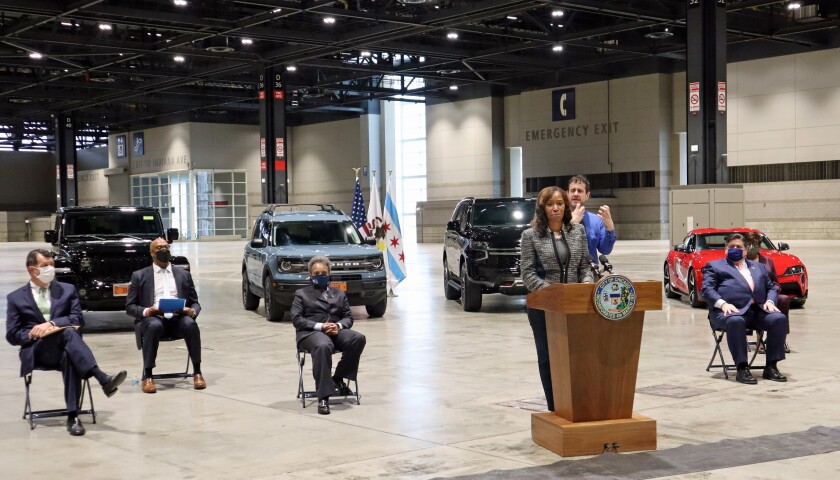 Illinois lawmakers signed off on the Metropolitan Pier and Exposition Authority’s subsidy request, providing a backstop for the agency to weather the pandemic’s lingering wounds.

The agency also is finalizing its next debt restructuring to provide another tool to manage loss of tax and operational revenues after the pandemic shut down the convention business last spring.

The agency, in addition to renting the convention center to exhibitors, collects taxes on food and beverage, car rental, hotel taxes, and airport departures.

The measures approved during the session that ended May 31 are expected to be signed by Pritzker.

And the stage is set for a rebound, albeit likely a slow one, with Gov. J.B. Pritzker prepared to move the state to stage five of a reopening plan that lifts all capacity constraints on June 11. Mayor Lori Lightfoot announced Thursday that low COVID-19 test positivity rates sets the stage for the city also fully reopen next week.

The agency will use the $15 million of incentive funds approved by lawmakers to cover discounts to make its bids for convention and trade show business more competitive. The $15 million of operational support represents the lower end of the agency’s request that incorporates the impending restoration of convention business. If the reopening was put off to January, the agency planned to seek up to $40 million.

The authority’s debt service appropriation from the state covers a roughly $15 million draw on the state sales tax backup pledge. It’s been at least a decade since MPEA triggered such a draw. The draw is subject to appropriation and must be repaid. MPEA previously said it expects to repay the draw over the next few years.

The legislature’s passage of the agency’s requests followed the announcement last week of a slate of events. “We are thrilled to announce between July 2021 and December 2022 that there are 122 events scheduled at McCormick Place with an estimated attendance of 1.94 million. Of these, 47 events are considered to be ‘major’ events with an estimated economic impact” of $2.35 billion, said MPEA Chief Executive Officer Larita Clark.

While it will take time for business to pick up and for its tax sources to rebound, the agency plans another restructuring that will ease debt service demands in fiscal 2022. The authority is legally allowed to refinance nearly $147 million in fiscal 2022 debt service.

“MPEA is currently working through its borrowing plans with the approved bond finance team. It will be requesting board approval of the bond financing at its June 29th Board meeting,” an agency spokesman said.

The agency reported at an April legislative hearing that 223 events had been canceled since the start of the pandemic in March 2020. The losses amount, according to the authority, to an estimated $3 billion economic impact from the loss of 3.4 million attendees and 2.2 million hotel night stays.

The authority in September sold $161 million of project expansion new-money and refunding bonds to restructure debt and ease fiscal 2021 pressures.

The tax-exempt 22-year term bond landed at a 199-basis-point spread to the Municipal Market Data’s AAA benchmark. The upcoming restructuring could benefit from the state’s positive fiscal momentum and demand for higher yielding paper that’s driven the state’s 10-year spread down to 70 bps over the Municipal Market Data’s AAA benchmark from nearly 200 bps at the start of the year.

Aside from the pandemic’s wounds, the agency has long anticipated the need for more debt restructuring due to a steep debt service repayment ramp.

The agency’s campus that houses McCormick Place Convention Center, a 2.6-million-square-foot facility that is the largest convention center in North America, and the Wintrust Arena has been shuttered since March 2020. One of two hotels on the campus just south of downtown Chicago remained open and the second is reopening this month.

The authority has about $2.8 billion of debt.

North Korea stole more crypto in 2022 than any other year: UN report
Yields rise with muni one-year topping 2.50%
Stocks making the biggest moves after hours: Chipotle, Enphase Energy, Fortinet and more
Options Trade Idea (Butterfly) – $100 Trade on Tesla TSLA with 48% Return Potential
Iron Condors: 101 What is it and How Does it Make You Money?