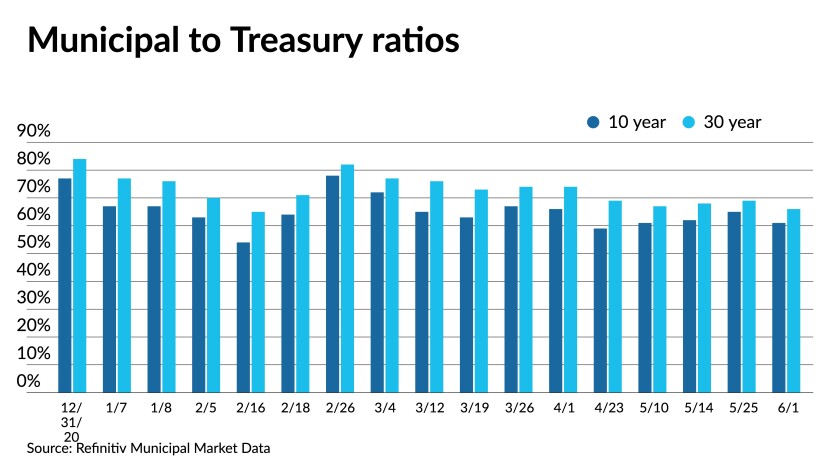 May’s price performance brought slightly softer levels inside 10 years and modest improvements further out the curve, but the the bigger theme in munis was a risk-on trade that took hold, “with notable spread compression across several sectors,” said Kim Olsan, senior vice president at FHN Financial.

The best performance for munis in May, and throughout 2021 so far, is high-yield. Refinitiv Lipper reported $1.466 billion of inflows into municipal bond mutual funds last week, of which high-yield made up $813.8 million, the third highest inflows in 2021.

“Stubbornly low yields and limited supply have pushed the year-to-date gain to near 5%. Such an outsized gain dwarfs other high-yield categories this year — the Bloomberg Barclay’s Global High Yield index has gained 1.88% and the U.S. High Yield index is up 2.25%,” Olsan noted.

High-yield returns for May were 1.15%, according to Bloomberg. The broad muni index gained 0.30% last month, but is still struggling to surpass the 1% mark for the full year, Olsan noted.

The revenue sector winners in May included healthcare with +0.53% gains, transportation with +0.42%, each benefiting from “the reach for yield and improving metrics,” Olsan said, noting that each sector is now up more than 1% for the year.

“Utility credits are more or less treading water this year, up just 0.20% while nominal yield pickups to GOs and wider-trading revenue names have taken the shine off a sector that flourished during lockdown periods,” she said.

May’s taxable muni supply was $6 billion, a drop from an average of $8 billion in the first four months.

Despite lower volumes, performance hinged on taxable asset classes. Taxable munis staged a 0.67% gain in May but are down on the year with a 1.35% loss.

Economy
Tuesday’s data showed more of the same: strength in the manufacturing sector, with price pressures and supply-chain issues.

“The May ISM manufacturing index surprised on the upside in terms of the headline measure, but the sub-components moved in both directions,” said Tim Quinlan and Sarah House, senior economists at Wells Fargo Securities. “The story that emerges is one of a manufacturing sector that could be growing much faster were it not for supply-side growing pains.”

The Institute for Supply Management’s manufacturing PMI gained to 61.2 in May from 60.7 in April.

IFR Markets estimated a reading of 60.8.

“The ongoing struggles for the supply-side of the economy to meet demand has left price pressures growing at a breakneck pace and although the prices paid index fell in May, the drop does not offer much in the way of meaningful relief,” Quinlan and House said.

Manufacturers “may very well be able to pass costs on given the strong demand backdrop.”

The Texas Manufacturing Outlook Survey also showed strength, although the expansion in may was slower than in April, and price pressures.

The general business activity index fell to 34.9 in May from 37.3 in April, while the index measuring activity at the firm level dropped to 22.0 from 29.1.

IFR estimated a reading of 34.0 for general activity.

The outlook uncertainty index jumped to 14.7 from zero, “indicating that uncertainty is back on the rise,” according to the Dallas Fed.

“Input prices and wage pressures accelerated further in May,” according to the report.

Also released Tuesday, construction spending nudged 0.2% higher in April after a revised 1.0% gain in March, first reported as 0.2% increase. Year-over-year spending is up 9.8%.

IFR expected spending to rise 0.6% in the month.

“Material price pressures are hampering the construction sector and builders’ ability to meet strong residential demand plus the return of nonresidential projects and supply shortages, which contribute to the price spikes, are expected to ease but not until later this year,” said Yelena Maleyev, economist at Grant Thornton.

The Michigan State Housing Development Authority (/AA//) is set to price on Thursday $321 million of rental housing revenue bonds, Series 2021 A (non-AMT) and Series B taxables. BofA Securities is bookrunner.

How can UK-based businesses accept Bitcoin?
Trading Strategies: Where to Place Your Stop Loss Order
Massive eruption from icy volcanic comet detected in solar system
New Cardano algorithmic stablecoin evokes old fears for the community
An uphill battle could await activist Trian as the firm snaps up a stake in Disney