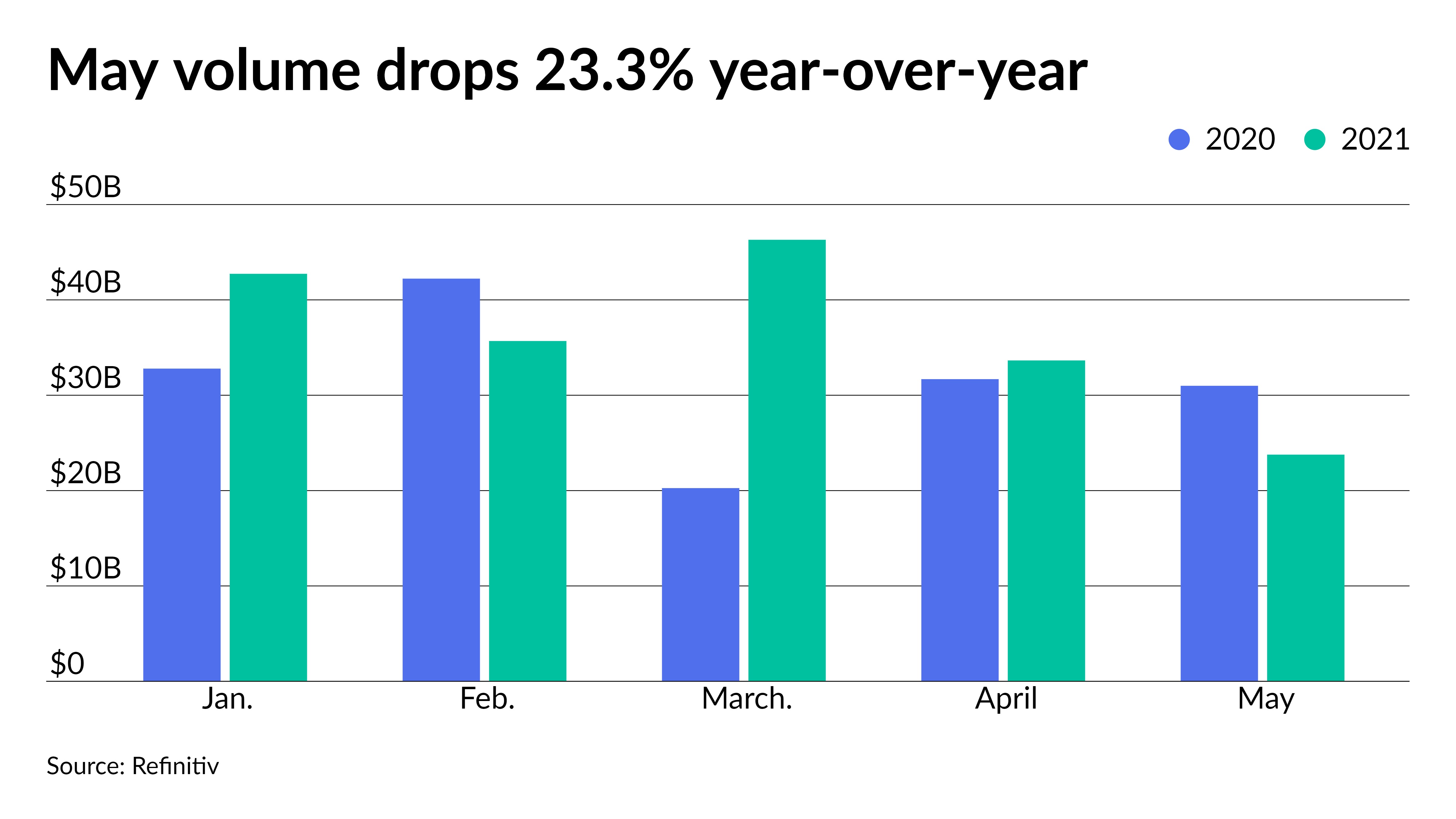 New-money, refunding and taxable municipal bond issuance all declined in May year-over-year, though a longer lookback shows an average figure for the month historically and the total volume for the year is ahead of the 2020 pace.

Even with the year-over-year drop in May, with five months now officially in the books, long-term muni volume stands at $169.45 billion, ahead of the $157.96 billion issued at the same point of 2020.

While participants have noted that some issuers sidelined themselves, awaiting federal aid and a more concrete vision of potential infrastructure spending coming down the pike, Sean Carney, head of municipal strategy at BlackRock, said several other factors were at play.

Carney noted that while the overall number is down, last year was an “abnormal” year for issuance due to the uptick following the initial coronavirus lockdown in March and April. From a historical perspective, this month’s number falls in line with Blackrock’s averages.

“With the fiscal stimulus, there is less of a need to fill the gap but also a couple of big deals got moved from May to June,” he said adding that the delayed tax-filing deadline affected issuance as well.

“May underwhelmed expectations but falls in line” with yearly averages, he said. “Outside influences seem to be weighing on issuance such as speculation about the potential return of tax-exempt advance refundings and/or a second Build America Bonds-like program.”

Dan Heckman, senior fixed-income strategist at U.S. Bank Wealth Management, was not surprised by the drop-off in taxable issuance in the month.

“We saw a lot of taxable issuance last year, especially in the third and fourth quarter of 2020, so I am not surprised that it waned,” he said. “The taxable market bid side seems to not be as strong as it should be.”

The drop in overall supply is coming at the same time as the summer redemption period begins. This may pose some challenges. Carney predicts the largest net negative issuance period in history, if BlackRock’s forecast is correct.

“June, July and August, we will see the largest net negative issuance period in history at negative $54 billion,” he said, noting that for those three months, the market should see $101 billion of issuance come in with $71 billion while $125 billion will exit the market via redemptions.

“The current cadence of primary new issuance is supportive of further market momentum even in today’s environment of low yields, tight spreads and lofty valuations,” Carney said. “As long as weeks of $10-plus-billion continue to be followed by weeks of $5 billion to $6 billion, issuance is not a threat to the current momentum being driven by a growing supply/demand imbalance and strengthening fundamentals heading into the summer.”

Carney pointed to the large Pennsylvania general obligation deal early in the month, among others, which boosted the competitive total. Competitive loans have been on the uptick and those issuers coming competitively have seen strong presale demand, with the majority of deals being put away by end of the pricing day and facing very little concession, Carney said.

“Competitive deals have come with lower coupons —2% or 1.5% and very aggressive structures — premium coupons increase the size of the offerings and spreads are a little tighter with competitive deals,” Heckman said.

For the first five months of the year, California issuers led the states with $29.7 billion, Texas with $17.9 billion, New York with $17.7 billion, Pennsylvania at $7 billion and Florida with $5.8 billion.