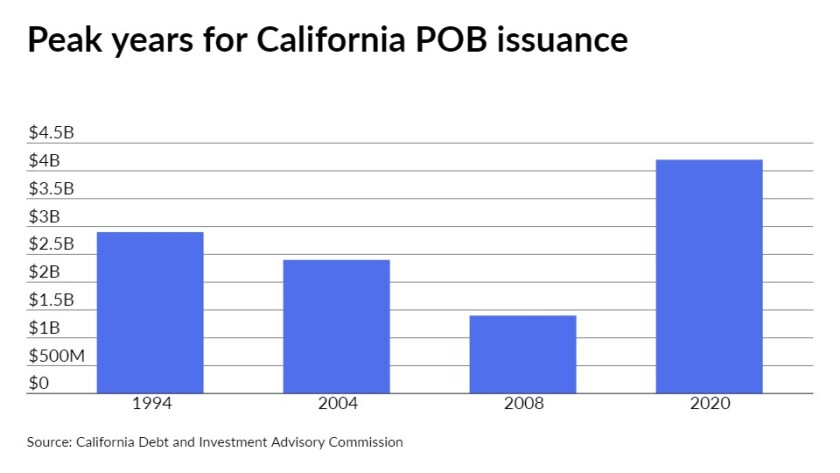 The $4.2 billion of pension obligation bonds issued in California in 2020 was more than triple the amount issued in any other year of the past decade.

More than $30 billion in POBs have been issued in California since 1985, and last year’s $4.2 billion represents 14% of that, according to CDIAC data.

MMA in a January report described refinancing unfunded pension liability as a way for issuers to “cope with the fiscal strains caused by the pandemic.”

In 2020 it was a two-state trend; California’s local governments accounted for 62% of volume in 2020, but Illinois represented nearly all the rest with 37% of volume, according to MMA.

POB proceeds may be used to fund required payments to the retirement system for the current fiscal year and/or to pay down the agency’s unfunded accrued actuarial liability, Joy wrote.

Most often POBs have been repaid as general fund obligations of the issuer, but Torrance and West Covina both used their streets to secure the debt by issuing lease obligation bonds.

In 2020, cities issued 62% of the state’s POB volume, while counties issued 7%, according to the CDIAC data.

Joy largely attributed the increase in POB issuance to the Federal Reserve lowering interest rates to near zero in March 2020.

“Although issuers are not able to control the returns on POB proceeds invested in the pension fund, low taxable interest rates increase the probability that the issuer will earn more on the investment of the POB funds than the cost of the debt,” Joy wrote.

While it can offer financial relief from pandemic-related costs, Joy wrote, “the strategy to issue POBs can also backfire if the returns on investment of the bond proceeds are not enough to offset the costs of issuance and debt service.”

The Government Finance Officers Association issued an advisory in 2015 that local governments should not issue POBs.

This trend toward issuing more POBs in California began in 2019 as local governments faced pressure for higher payments from the California Public Employees’ Retirement System reduced its amortization schedule to 20 years from 30 years.

The change shortened the amount of time that local governments have to repay the Unfunded Actuarial Accrued Liability. Local government budgets aren’t expected to be impacted by the change until July 2021, Joy wrote.

This year could also be another record-setting year for POB issuance in California, as issuance is almost $2 billion now, and another $370 million is planned for sale in June, according to CDIAC.