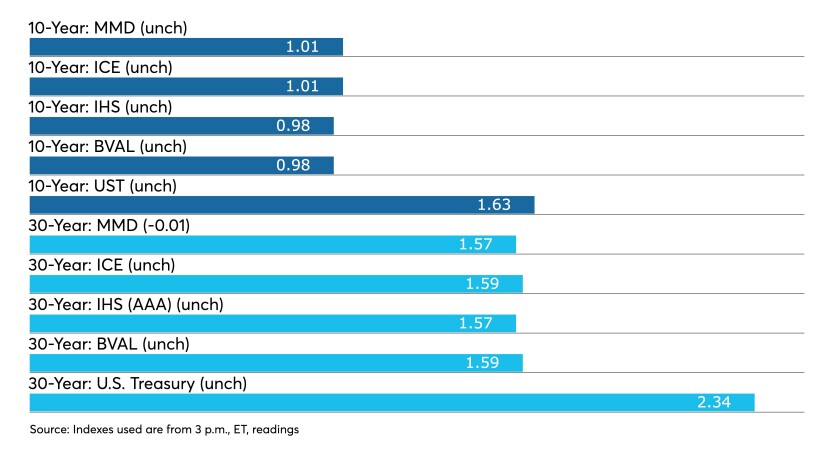 There are 19 deals larger than $100 million in a mixture of credits that should keep yields steady, all else being equal. About $1.64 billion of ESG bonds will be priced, equal to about half of the total issued in the first quarter, according to Refinitiv MMD. Joining WMATA in selling ESG bonds in that burgeoning market are issuers from New Jersey, California, Wisconsin and Nebraska.

The total potential volume is estimated at $6.99 billion, of which $970 million are taxable. There are $5.591 billion of negotiated deals versus a revised $2.559 billion that were sold this week. Bonds scheduled for competitive sale are $1.403 billion compared with $1.790 billion this week.

Strong technicals have been the theme, and with federal aid and better-than-expected tax receipts coming in, issuers are not tapping the market as much as investors would hope.

“At this point there is very little excitement in the asset class,” Barclays strategists Mikhail Foux, Clare Pickering and Mayur Patel wrote in a weekly report. “As rates move up and down in a narrow trading range, high-quality tax-exempts just follow, but with a much smaller amplitude. Supply is definitely not overwhelming — many municipalities don’t really need to tap the market, as they have ample cash as tax receipts are surpassing expectations with the U.S. economy starting to recover, while federal funds received through the American Recovery Plan, is addressing their needs.”

And while so far this year, nearly all U.S. fixed-income assets are under water, with the exception of corporate high yield, “and of course tax-exempts, as the latter dramatically outperformed Treasuries … while also making them one of the best-performing fixed-income market segment in the U.S. this year,” they said.

The Barclay’s strategists are less sanguine about municipal performance heading into the summer, though.

“It is going to be very hard for tax-exempts to continue performing. If rates move higher this summer, muni yields will likely follow,” they wrote. “We don’t expect them to meaningfully outperform despite the positive technicals that could be especially strong this summer. Some one-off stories like Puerto Rico and tobacco in the past several weeks, and Illinois this week where we see value in litigated GOs after this week’s Supreme Court decision, still attract investor attention, and provide short-lived opportunities, but they are more of an exception than a rule.”

While at current levels, tax-exempts provide little value versus Treasuries, compared with taxable munis they offer even less value, Barclays noted, adding that back in February, when some tax-exempt investors considered buying taxable munis instead, “the story might repeat itself again” now.

The University of Nebraska Facilities Corp. (Aa1/AA//) is set to price on Wednesday $344.79 million of university facilities program bonds, $260.6 million of series 2021A, and $84.2 million of green Series 2021B. BofA Securities is lead underwriter.

Economic data
Existing home sales fell 2.7% in April to a seasonally adjusted annual rate of 5.85 million, from a non-revised 6.01 million and a 3.7% decline in March.

“It is a clear trend that the combination of price increases and low inventory is frustrating home buyers, as they are either priced out or are choosing to back out,” according to Ralph McLaughlin, chief economic advisor at Kukun.

Buyers should return, he said, when the headwinds clear. “Maybe new inventory will come, which would help and also maybe interest rates will go up, which will cool prices some,” he said. “The housing market needs more new homes, as that will free up existing inventory.”

Buyers are snapping up homes quickly, according to Scott Ruesterholz, portfolio manager at Insight Investment. “The average home was sold in 17 days, from 18 days last month, so as supply hits the market, buyers quickly emerge.”

Insufficient supply “may cap the pace of sales and create further upward pricing pressure,” he said. “Supply issues should abate later this year as new home construction is completed and the mortgage forbearance programs end.”

“Last year was a really low benchmark, so to me, the year-over-year number is misleading,” said McLaughlin. “I wouldn’t be surprised if this trend continues.”

Aaron Weitzman contributed to this report.