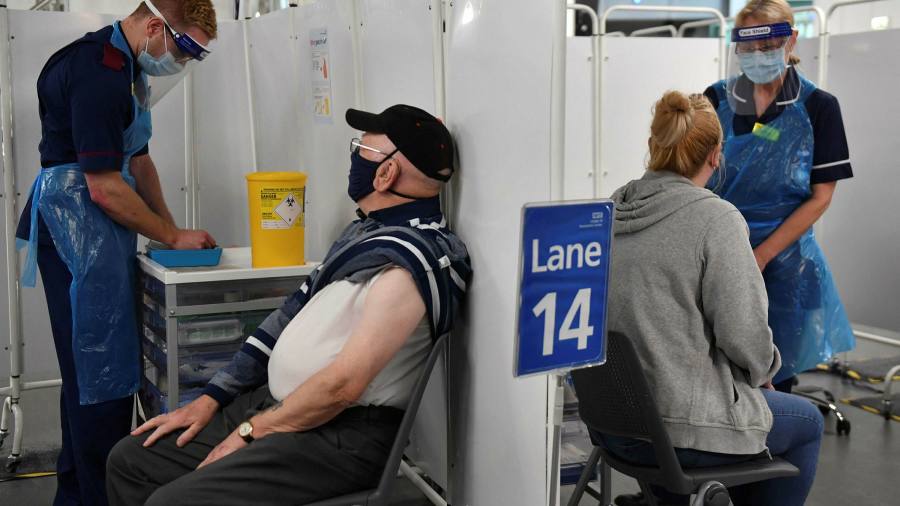 Two doses of either the BioNTech/Pfizer or Oxford/AstraZeneca Covid-19 vaccines offer good protection against symptomatic infection from the variant first identified in India, according to new UK data, indicating minimal reduction in efficacy compared to the so-called Kent variant.

The BioNTech/Pfizer jab provided 88 per cent protection against the B. 1.617.2 variant found in India, a barely perceptible drop from the 93 per cent provided against the B.1.1.7 strain first identified in Kent in south-east England, according to the Public Health England data.

Protection conferred by two doses of the Oxford/AstraZeneca vaccine was lower against both variants, at 66 per cent for B.1.1.7 and 60 per cent for B. 1.617.2.

However, officials cautioned that these numbers were likely to be underestimates, pointing to the later rollout of second doses of the AstraZeneca jab compared to the BioNTech/Pfizer shot, which meant the AZ cohort had been followed up for a shorter period of time.

The figures will boost hopes that the UK government can end the country’s lockdown as planned on June 21.

Other data has shown the AZ vaccine takes several weeks to reach maximum effectiveness after the second dose, suggesting its protective effect may not have been fully captured in the new data.

The relative drop in efficacy against B. 1.617.2 was similar for both vaccines: amounting to 6 per cent for the BioNTech/Pfizer vaccine, and 10 per cent for Oxford/AstraZeneca.

Matt Hancock, health and social care secretary, described the new evidence as “groundbreaking”. Referring to the number of people who had already received both vaccine doses, he added: “We can now be confident that over 20m people — more than 1 in 3 — have significant protection against this new variant”, a number that was growing by “hundreds of thousands” each day.

Dr Mary Ramsay, head of immunisation at Public Health England, said she and her colleagues expected the vaccines to be even more effective at preventing hospitalisation and death.

The severity and transmissibility of the Indian variant will be crucial to determining whether Boris Johnson is able to meet his “road map” for fully reopening the country. Officials report data daily to ministers and are having formal conversations with Hancock and the prime minister at least once a week to update them as Johnson weighs a final decision, insiders said.

The data released on Saturday provide more detail on earlier figures seen by the Financial Times.

The evidence to date indicates that B. 1.617.2 is less able to evade vaccine immunity than B.1.351, the variant first identified in South Africa, according to public health officials.

Data from English hospitals showed that of 2,889 genetically confirmed cases of B. 1.617.2, 104 had led to an emergency department visit, of which 31 had an overnight stay in hospital, and 6 died. These records have not yet been fully matched with vaccination status, so the breakdown of severe cases between vaccinated and unvaccinated people is not known.

A separate report from PHE published on Saturday showed continued evidence that B. 1.617.2 is more transmissible than B.1.1.7.

But modelling by British scientists has also shown that the patterns of the variant’s growth vary considerably between different parts of the UK. A public health official said that in London the shifting proportions of B.1.1.7 and B. 1.617.2 looked like a replacement of one variant by the other without any overall growth in numbers, but in other parts of England the variant first identified in India is growing sufficiently fast to produce an overall increase.

Dr Robert Challen, of the University of Exeter, whose modelling of the variant from India was presented to the government’s scientific advisory group, SAGE, said it was hard to reach a definitive conclusion about what was driving the growth of the variant. Larger household sizes could play a part but “there could be other factors that are less easy to control for like poor ventilation or denser housing”, he added.