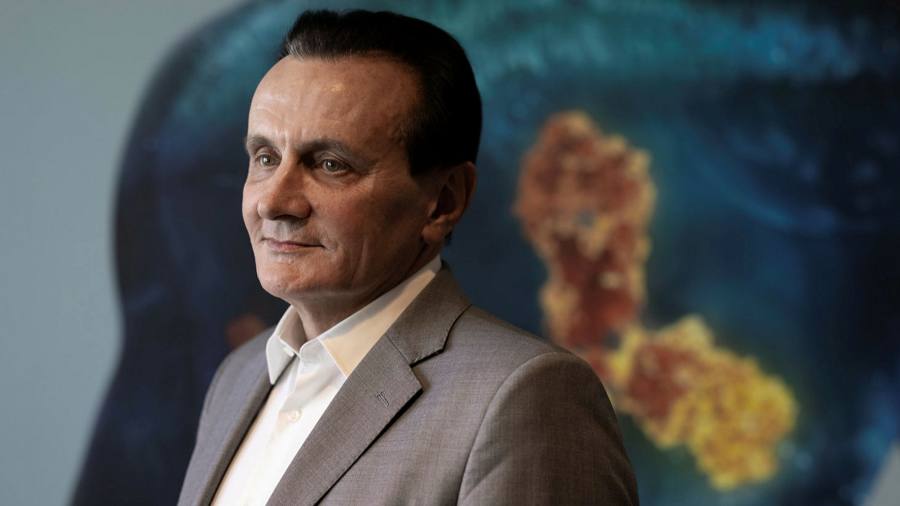 The chief executive of AstraZeneca has insisted its Covid-19 vaccine has a future, as he revealed the UK had priority access to the jab and hit out at the “armchair generals” behind “traumatic” attacks on the company.

In his first interview following a string of setbacks, including the emergence of rare fatal side-effects, Pascal Soriot defended the Oxford/AstraZeneca vaccine and offered new evidence that it could play an important role in the ongoing battle against the disease.

Soriot told the Financial Times that the jab was only slightly less effective against the variant first found in India than the strain identified in Kent and said that in animal studies a new booster had performed well against other variants. AstraZeneca is in talks with governments, including the UK, about new contracts for booster doses, he said.

Commenting for the first time since the European Commission said it would take legal action over a shortfall in AstraZeneca deliveries, Soriot said: “You can look at the glass half empty: we’ve delivered less than we expected to deliver in Europe. You can look at the glass half full: we’ve delivered more than 400m doses [worldwide] and we’ve saved tens of thousands of lives.”

“I’m a European so I love Europe, don’t get me wrong,” he said. “But at the end of the day Europe is part of the world, it’s not the whole world. And there are many countries around the world who actually want this vaccine, so this vaccine has a future.”

The EU has been frustrated that it has suffered a supply shortfall when the UK has not. Soriot revealed that the UK government had been guaranteed priority in vaccine supplies as part of the agreement it struck with Oxford university in return for investment, before AstraZeneca came on board as development partner to manufacture and distribute the vaccine.

“Of course when you do something like this as a government, you don’t do it for free,” he said. “What you want in return, and it’s fair enough, is priority.”

The UK government, he said, had done “a great job with vaccinations”, most importantly by appointing “a professional” — venture capitalist Kate Bingham — to run the task force charged with acquiring vaccines: “Not a procurement manager who would negotiate a price, or put numbers in spreadsheets. Someone who knew the industry,” he added.

He declined to be drawn on whether the EU — which set up a joint vaccine-buying system run by officials from the European Commission and member states — should have followed the same strategy.

Soriot also held back from directly criticising rival vaccine makers such as Pfizer and Moderna, some of which are forecasting tens of billions of dollars in revenue from the Covid-19 shots this year alone.

“We wanted to provide this vaccine at no profit because we saw, as an industry, we should not be seen as profiteering from this type of pandemic,” he said.

After explaining that two-thirds of AstraZeneca’s vaccine supply is going to low and middle income countries, he said: “Pfizer is focusing on the US and Europe and a few other countries, and soon enough, hopefully, they’ll also supply the poorer countries.”

With a lower efficacy rate in clinical trials and concerns about side effects, some countries have begun to cast AstraZeneca’s vaccine as a poor relation to rivals. But Soriot insisted that evidence on efficacy collected in studies after the vaccines were approved showed it had “exactly the same result” as the BioNTech/Pfizer jab.

He said the company has not decided what to do with the vaccine in the long term. AstraZeneca did not have a traditional vaccine business before the pandemic, selling only a flu vaccine nasal spray.

“I was originally expecting that by now we would know, but we’ve had so much to do, and we’ve had a few setbacks for sure,” he said. “You can’t say ‘we’re going to be in vaccines’, just like this. You need to think, ‘OK, do I have the right technologies? Is it going to make sense? Is it a good use of our capital versus all the opportunities we have in oncology?’”

The 61-year-old French chief executive said that by delivering the vaccine non-profit he had hoped to do good and improve the industry’s image.

But the plan had been disrupted by “bad luck” and “people misunderstanding things”, he claimed. Now back in AstraZeneca’s Cambridge office, after running the company via Zoom from Australia for many months, he said the attacks it had received had been “traumatic”.

“People are just trying to do their best. They’re just trying to produce a vaccine to save lives. It’s that simple. And then, to be criticised every day, sometimes fair criticism, sometimes by armchair generals who have opinions about everything, is really disheartening,” he said.

“Because I’m a big boy, I’ve been criticised so many times in my life I can put up with this, and my grandson is proud of me so that’s the only thing that matters,” Soriot added. “But we have thousands of people who work on this . . . And I’m not exaggerating, people have dedicated their lives to this for several months, so then to get all this criticism is, of course, disheartening. So then, you can think, we could have saved ourselves this, but then you have to remember the impact we’re having. And the impact we’re having is thousands and thousands of lives saved.”

Soriot admitted an “own goal”, when the US trial’s data safety monitoring board accused the company of publishing outdated information, suggesting it had massaged the results. AstraZeneca’s staff had simulated what the final data would look like but forgotten to inform the board.

“It is not typically necessary but out of politeness and out of good practice, they should have told them,” he said. “People have worked so hard, they were tired, they were rushing.”

Soriot faced a substantial investor backlash earlier this month, when about 40 per cent of shareholders voted against a pay package worth up to £15.4m, with half tied to share price performance.

Noting that he came from “a very modest family . . . so I know that we all make a lot of money”, Soriot said changes to the company’s long-term incentives structure had been needed to attract high-calibre candidates. AstraZeneca was far below the “global pharma benchmark”, with other companies, including fellow UK-based drugmaker GlaxoSmithKline, awarding much higher long-term incentive grants.

“So people have made it all about me, and of course it affects me but it was important to sort the policy out so we could attract talent to replace me, but also to recruit people on the [senior executive team],” he added.

On his own future, Soriot said only that he would retire “at the appropriate time” but made clear that board planning was under way for his departure and that of two other long-serving company leaders, chair Leif Johansson and chief financial officer Marc Dunoyer. “We have an agreed sequence of when each of us will retire,” he said.

Reflecting on a year in which his company has come under sustained criticism over missteps on the vaccine, but cemented its position as one of the most successful global pharma companies with a portfolio of blockbuster cancer drugs, Soriot, who turns 62 on Sunday, said: “The good thing about getting old is that you have scars like an old soldier’s . . . The question is, in the direction of travel, are you going up overall? And I think we are.”

Stocks making the biggest moves before the bell: Apple, Alphabet, Amazon, Starbucks and more
Nationwide protests planned in India as Adani stocks lose $164b or over half their value
Common investing mistakes – part 3
GasLog Partners (GLOP) and LendingClub (LC): 11/3/2022 Bull & Bear
Scientists created a weird new type of ice that is almost exactly as dense as water