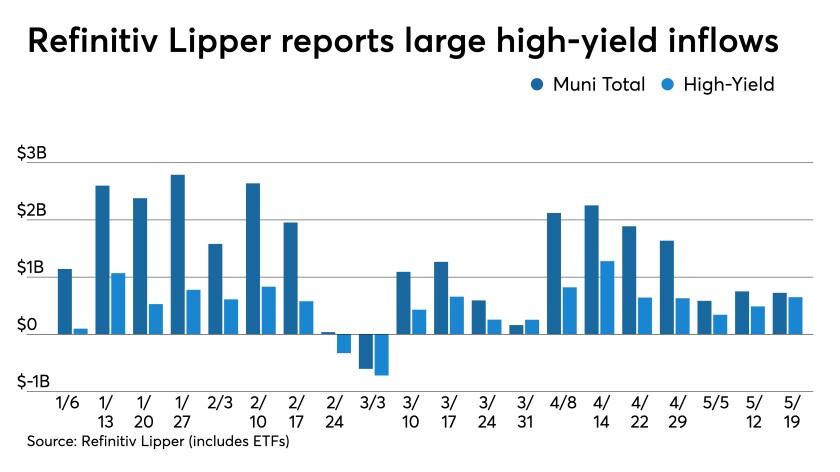 Fund inflows continue to be in positive territory with Refinitiv reporting $725 million of total inflows into municipal bond mutual funds for the week ending May 19. High-yield funds made up $648.7 million, or more than 89% of the total. This follows $750 million and $487 million of inflows, respectively, the week prior, marking another week where high-yield makes up a majority of inflows. The highest inflows on record were $1.3 billion on April 14.

The expectation for higher taxes and a solid credit picture is keeping municipal investors engaged, brushing off larger market concerns of inflation or longer-term credit weakness.

For now, “it appears that muni investors are being driven more by the advent of higher taxes and less by the threat of rising inflation, which is having a more significant impact upon the Treasury market,” said Jeff Lipton, managing director of credit research at Oppenheimer Inc.

Investors are also paying attention to anything with incremental yield.

“We suspect that longer duration and weaker quality credits will continue to outperform the broader muni index for the time being, and so we encourage careful security selection for yieldier names,” Lipton noted.

Lipton noted that the improving credit outlooks for nearly all sectors continues, but “credit distinctions tend to be clouded by technical-driven market conditions which have tightened spreads, pushed ratios down to historic levels, and have generated rather full valuations,” he wrote. “If we get to the point where technicals become less compelling with spreads gapping out and ratios normalizing, the fundamental analytical assessment process will have more of an impact.”

Lipton also said he is advising investors to pay close attention to the muni/Treasury relationship “where an extended downward repricing of the Treasury yield curve could escort muni yields higher in sympathy, thus presenting a potential buying opportunity.”

Economic indicators
Thursday’s data suggest the economy is bouncing back, but offer no clue whether inflationary pressures will persist, analysts said.

“Today’s reports together are consistent with an economy meaningfully rebounding, and while there is clearly inflationary pressure today, it is far from certain these pressures will prove to be more than transitory,” said Scott Ruesterholz, portfolio manager at Insight Investment.

Initial jobless claims fell to a pandemic low of 444,000 on a seasonally adjusted annual basis in the week ended May 15 from an upwardly revised 478,000 a week earlier, first reported as 473,000.

Economists polled by IFR Markets expected 450,000 claims in the week.

Continued claims rose to 3.751 million in the week ended May 8 from a downwardly revised 3.640 million a week earlier, initially reported as 3.655 million.

Ruesterholz sees “considerable improvement” in the labor market, with April’s below-expectations employment report “likely a blip rather than a sign of deceleration.”

Also released Thursday, the Federal Reserve Bank of Philadelphia’s manufacturing report on business showed slower growth in the sector in May, while the price indexes hit 40-year highs.

“While prices are rising today, it’s encouraging that the manufacturer’s six-month forward pricing expectations declined a bit,” Ruesterholz said. “We see much of today’s inflationary pressures as being driven by supply chain issues and commodities, rather than a more persistent rise in prices and it seems manufacturers agree.”

LEI has is above pre-pandemic levels, according to Ataman Ozyildirim, senior director of economic research at the thinktank. “While employment and production have not recovered to their pre-pandemic levels yet, the U.S. LEI suggests the economy’s upward trend should continue and growth may even accelerate in the near term.”

The gain in LEI was “driven by labor market improvement as well as buoyant financial markets and despite supply chain restraints that held back other components,” said Wells Fargo’s Tim Quinlan, senior economist and Hop Mathews, economic analyst.

While labor market constraints should lessen, supply issues could restrain other sectors, “which could continue to put upward pressure on prices, especially if demand remains strong,” they said. “We believe the overall story remains positive and look for robust growth over the next few quarters.”

Ruesterholz noted the growth shows the economy is gaining momentum. “The combination of pent-up demand from consumers, factories working through backlogs, and a robust housing market should enable the economy to expand potentially 10% in Q2, passing its pre-COVID level of GDP, a significant benchmark on the road to recovery,” he said.