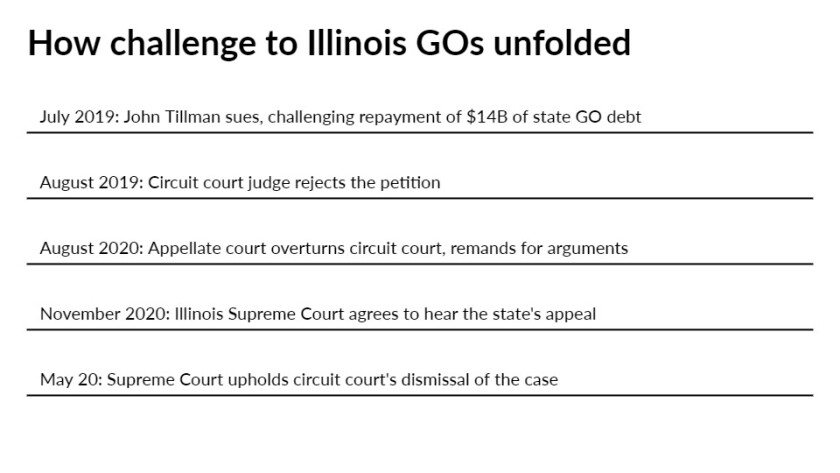 The justices in a unanimous 13-page opinion Thursday affirmed the 2019 circuit court decision that denied John Tillman, who is head of a conservative policy group but acted on his own as a taxpayer, permission to sue the state to block repayment of $10 billion of 2003 pension bonds and $6 billion of bill backlog borrowing in 2017.

At the time of the lawsuit’s filing in July 2019, $14.3 billion remained outstanding.

The opinion settles the issue over whether the case can proceed which, in turn, puts to rest the potential repayment challenge.

“As today’s ruling noted, bond counsel and the state Attorney General signed off on all these bonds. They were constitutional,” state Comptroller Susana Mendoza said in a statement.

It provides direction for courts considering future taxpayer action petitions, but the justices notably declined to weigh in on the constitutional questions Tillman raised about state borrowing rules, appearing to leave the door open to challenges of authorized but unissued bonds to pay down the state’s outstanding bills.

“I am of course disappointed in the Illinois Supreme Court’s ruling,” Tillman said in a statement. “We are evaluating our options as to how to proceed from here. In the interim, I continue to be profoundly concerned about Illinois’ reckless debt accumulation. All Illinoisans should care about this.”

The opinion, authored by Chief Justice Anne M. Burke with all six other justices concurring, focused on the doctrine of laches, or undue delay in asserting a legal claim.

Because of that, “there is no reasonable ground…for filing petitioner’s proposed complaint,” the opinion said. “We therefore affirm the circuit’s order denying the instant petition, although on different grounds than those relied upon by that court.”

An appellate court overturned the decision finding that the lower court went too far in considering the merits and because the suit didn’t appear “frivolous” or “malicious” — a standard applied in some prior cases — and therefore should be allowed to proceed.

Attorney General Kwame Raoul, who represents the state, appealed to the high court and also requested that justices settle the question over whether the bonds passed constitutional muster.

Municipal bond market participants followed the case closely and many believed the challenge was a long shot, given the state’s legal review process in advance of issuing the debt, and said they believed that if voided the state would find a way to make good on the debt to preserve its investment grade ratings. The state is rated one notch above junk, the lowest ratings of any state.

The undertow of doubt created by the case has in the past influenced secondary bond market prices for Illinois debt. At some times since the case began in 2019, the bonds in question had traded wider by 15 bps to 20 bps than other outstanding state GOs.

Many market participants believed the state could not issue debt the legislature has authorized to pay the state’s overdue bills until the case was resolved. And if Tillman had eventually prevailed, the impact would have rippled across the market.

“The Illinois Supreme Court’s decision, siding with the state, is positive for bondholders and Illinois taxpayers. The decision is not a surprise and so I expect any spread tightening will be modest,” said John Ceffalio, senior municipal research analyst at CreditSights Inc.

“The suit, brought for political motives, caused uncertainty in the municipal market when it was filed, and disrupted Illinois’ ability to access the bond market,” Ceffalio said. “If Tillman had successfully invalidated full faith and credit bonds issued eighteen years ago, it would have had major negative consequences for our market and for taxpayers nationwide.”

The high court’s opinion first tackles questions over what constitutes “reasonable grounds” for allowing taxpayer actions to proceed, and that stands to have a more sweeping impact by providing guidance on future lawsuits.

Circuit Court Judge Davis in Springfield originally denied the petition to proceed after concluding the state had met the legal requirement on outlining the specific purposes and so concluded the case lacked “reasonable grounds.”

Tillman countered in his appeal, and the appellate court agreed, that such consideration of the legal merits went too far and the court should have limited its consideration to whether the litigation on its face was “frivolous” and “malicious.”

The high court disagreed with that interpretation, finding Tillman’s argument and the appellate court’s ruling to be “incorrect.”

The court then turned to address directly whether Davis “abused his discretion” in his decision rejecting the litigation, looking first at the attorney general’s argument that the case came too late and so would cause undue harm to the state under “laches.”

Under laches, the defense must show the accuser knowingly “slept on his rights to the detriment of the opposing party,” the opinion said. It’s a separate argument from statute of limitation violations which outline a specific time to file a lawsuit and the AG had argued was violated with respect to the 2003 bonds.

The attorney general argues that granting relief to Tillman “would amount to a de facto default on outstanding bonds that are backed by the full faith and credit of the state. We agree. Enjoining the state from meeting its obligation to make payments on general obligation bonds will, at the very least, have a detrimental effect on the State’s credit rating,” the opinion read.

The high court’s conclusion on the “laches” violations differed from the reasons Judge Davis gave in rejecting the case. He centered on whether the state had met the constitution’s threshold for the debt issuance but, in the end, both have the same effect: the taxpayer action can’t proceed.

Tillman’s effort to contest repayment of the bonds centered on his argument that the 2003 and 2017 bonds violated the “specific purposes” language governing debt. The lawsuit offered a narrow interpretation of the constitutional language limiting long-term bonds issuance to capital.

Tillman had argued the 2003 pension bonds violated the rules because they represented a “deficit financing” which he contends violated the constitution as $2.7 billion was used to cover near-term pension contributions with the remainder paying down the unfunded liability. The 2017 bonds to pay down the state’s bill backlog which Tillman also argued falls short of the “specific purposes” rule.

The justices did not settle the constitutional arguments Tillman raised about the debt.

“Although respondents [the attorney general] urge this court to address the merits of petitioner’s constitutional claims, we decline to do so before determining whether there are any non-constitutional grounds for affirming the circuit court’s decision,” the justices wrote citing precedent in other cases that look to constitutional questions to settle a case only as a last resort.

The justices instead ruled on the Tillman case by finding a violation of laches.

“The administration is pleased that the Supreme Court sided with hardworking taxpayers over a frivolous lawsuit designed to grab headlines,” said Pritzker’s spokeswoman Emily Bittner.

Originally, the hedge fund Warlander Asset Management LP was named as a plaintiff in the taxpayer action. The firm was a holder of $25 million of state GO bonds and it argued repayment of alleged illegal bonds would impair the market value of its holdings of uncontested bonds.

During circuit court proceedings, Nuveen Asset Management LLC and AllianceBernstein LP submitted filings supporting Illinois’ position and it was disclosed Warlander at the time stood to benefit if the bonds were ruled illegal because of credit default hedges it had entered into involving the challenged bonds. The firm’s involvement and its named was dropped from further proceedings.