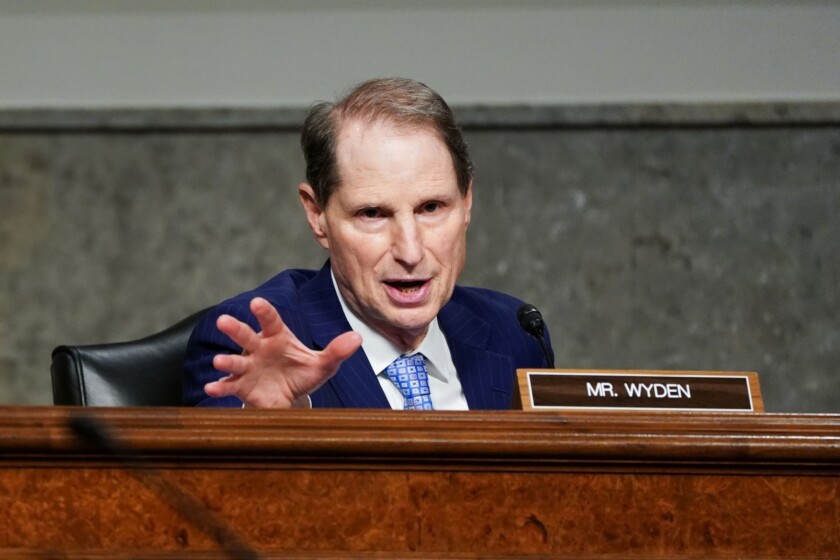 A revival of direct-pay Build America Bonds received bipartisan support Tuesday from the Democratic chairman and ranking Republican of the Senate Finance Committee.

Other senators and the witnesses also advocated restoration of tax-exempt advance refundings and an expansion of private activity bonds as lawmakers explored options for financing infrastructure.

Chairman Ron Wyden, D-Ore., opened the hearing with an observation that Congress “ought to be looking at smart financing tools to help draw private dollars off the sidelines and into infrastructure.”

Wyden cited as a success story the $182 billion in BABs were sold a decade ago when the initial projections were “that only a few billion dollars’ worth of those bonds would sell.”

Wyden was joined in his endorsement of BABs by ranking Republican Mike Crapo of Idaho who said, “They can be a significant way of incentivizing private capital into our infrastructure.”

Bennet and Sen. Roger Wicker, R-Miss., are lead sponsors of the American Infrastructure Bonds Act of 2021 that would create a new series of direct-pay bonds that, unlike BABs, would be exempt from federal budget sequester cuts.

The taxable bonds would be marketable to pension funds and foreign investors while municipal issuers would receive direct payments from the Treasury Department at a rate of 28%.

Wyden said he intends to work with Crapo, Bennet and Wicker to ensure direct-pay bonds become part of whatever infrastructure legislation passes the Senate.

“We should consider how public private partnerships can fit into our comprehensive infrastructure funding,” Crapo said.

“Private activity bonds for transportation projects have proven so attractive that the program is oversubscribed,” Crapo said. “And with the $15 billion cap having been met and additional applications outstanding we should address it.”

The ranking Republican said the Senate should consider how PABs and other bond programs can be used to help states and localities move their infrastructure projects forward.

Victoria Sheehan, president of the American Association of State Highway and Transportation Officials, credited a federal TIFIA loan that was backed by a state gasoline tax increase with helping her home state of New Hampshire complete a highway project between Manchester and the Massachusetts state line.

Heather Buch, a county commissioner from Lane County, Oregon who testified on behalf of the National Association of Counties, listed the preservation of the tax deduction for municipal bonds as NACo’s first priority followed by a restoration of tax-exempt advance refunding.

A repeal of the $10,000 cap on the federal deduction for state and local taxes was the next priority listed by the NACo witness.

However, later in the hearing Republican Sen. Steve Daines of Montana suggested that an extension of the SALT cap beyond its current 2025 expiration date could raise billions of additional dollars in revenue for infrastructure.

Daines’ comment was indicative of the divide between Republicans and Democrats over how to pay for the proposed legislation.

Republican senators each said they would not undo the 2017 Tax Cuts and Jobs Act that lowered the corporate tax rate to 21%.

Wyden, however, reminded his Republican colleagues that there had been bipartisan agreement prior to passage of that law that corporate profits repatriated from overseas would be used to finance infrastructure.

Sen. Sherrod Brown, D-Ohio, suggested that “a place to start” on finding a bipartisan agreement on paying for the legislation might be using increased enforcement by the Internal Revenue Service.

Republican Sen. Charles Grassely of Iowa also said that paying for the legislation would be difficult but offered optimism.

“We have met that challenge before and I am confident we will be able to do it this time,” Grassely said.