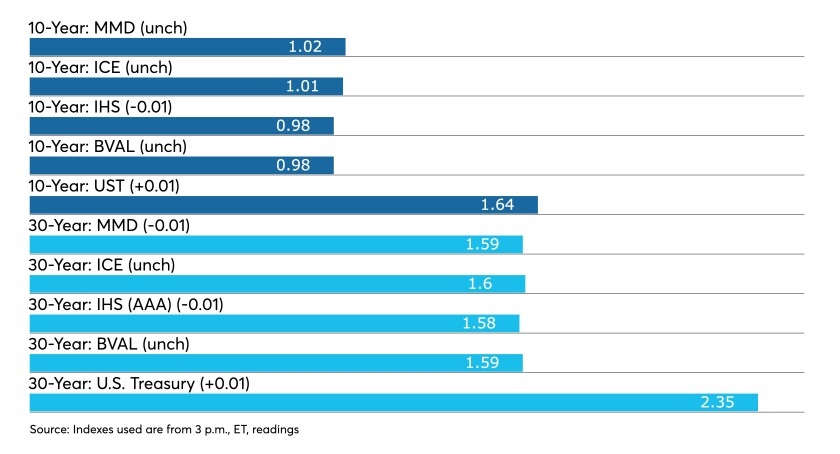 Municipals were quietly traded with some strength outside 10 years as investors await the larger new-issue calendar that begins with a retail order period Tuesday from Connecticut and competitive loans from West Virginia and high-grade Prince George’s County, Maryland.

Municipal benchmarks were little changed, with a basis point bump on Refinitiv MMD’s scale outside 2031 while municipal to UST ratios closed at 62% in 10 years and 68% in 30 years on Monday. ICE Data Services saw ratios on the 10-year at 61% and the 30-year at 68%.

Strong technicals continued to fuel the market and “cash flow from investors is still strong even with the threat of inflation hovering over the market, due to the overwhelming factor that this administration is driven to raise taxes,” Roberto Roffo, managing director and portfolio manager at SWBC Investment Company, said Monday.

The primary should provide benchmarks guidance. This week’s $9 billion primary market calendar is an uptick from recent weeks.

“Most of the large deals this week are high grades and should clear the market easily due the strong demand from investors,” Roffo said.

Market participants were well-poised to greet the slate of new-issue product, according to Jeff Lipton, managing director and head of municipal credit and market strategy and municipal capital markets at Oppenheimer & Co.

Lipton said the primary market reception has been strong with demand working overtime to tighten spreads and push relative value ratios down to new lows.

“Until further notice, the muni performance trajectory can be expected to outpace that of UST, especially as reinvestment needs rise through the summer months and new-issue supply finds it challenging to fill the void left by maturing securities and bond redemptions,” he said. “We suspect that new-money issuance through the balance of the year will be guided by the state of muni credit and levels of capital needs just as refunding activity will likely remain influenced by interest rate shifts.”

Looking ahead this week, Lipton said, the bond market will focus on the minutes of the April FOMC meeting.

“Although that gathering did not include a revised summary of economic projections, the document will be parsed — not only for any clues on when the Central Bank will initiate a policy pivot, but also for any evidence of a break in the consensus ranks,” he added.

Municipal CUSIP request volumes rise in April
The aggregate total of all municipal securities, including municipal bonds, long-term and short-term notes, and commercial paper, rose 4.3% in April versus March totals, according to CUSIP Global Services. On an annualized basis, municipal CUSIP identifier request volumes were up 17.2% through April. For muni bonds specifically, there was a 4.1% month-over-month increase in request volumes and a 20% increase on a year-over-year basis.

Business activity in the New York regions continued to “grow at a solid clip,” according to the latest results released by the Federal Reserve Bank of New York on Monday morning.

General business conditions slipped to 24.6 in May from 26.3 in April, but came in above estimates, as economists polled by IFR Markets expected a reading of 23.9.

“The trend from all these Fed regional surveys continue to be strong improvements with rapidly growing pricing pressures,” Moya said.

The number of employees index slipped to 13.6 from 13.9, while the average employee workweek index increased to 18.7 from 12.7.

Looking ahead six months into the future, business conditions dipped to 36.6 from 39.8.

Also, the National Association of Home Builders housing market index came in at 83.0 in May, unchanged from its April reading.

Economists anticipated a reading of 83.0.

“Builder confidence in the market remains strong due to a lack of resale inventory, low mortgage interest rates and a growing demographic of prospective home buyers,” said Chuck Fowke, chairman, NAHB. “However, first-time and first-generation home buyers are particularly at risk for losing a purchase due to cost hikes associated with increasingly scarce material availability. Policymakers must take note and find ways to increase production of domestic building materials, including lumber and steel, and suspend tariffs on imports of construction materials.”

“Low interest rates are supporting housing affordability in a market where the cost of most materials is rising,” Dietz said. “In recent months, aggregate residential construction material costs were up 12% year-over-year, and our surveys suggest those costs are rising further. Some builders are slowing sales to manage their own supply-chains, which means growing affordability challenges for a market in critical need of more inventory.”

Lynne Funk contributed to this report.