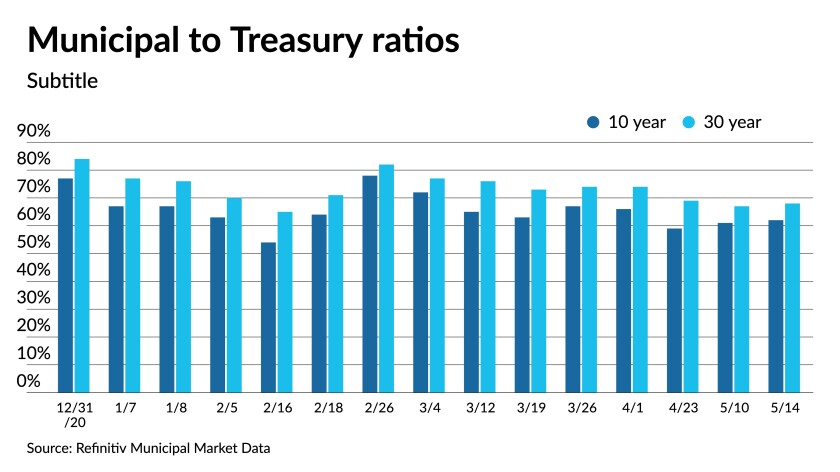 Despite the slight pressure from economic data and overall market volatility, municipals continue to hold their own place in the capital markets.

“This week was a good example: rates were under pressure, and tax-exempts were not completely immune, as muni yields have moved higher in sympathy, but still outperformed Treasuries,” they wrote. “Five-year tax-exempts have been rich for some time, as a result their yields and ratios have been steadily adjusting higher, but longer-dated munis continued to outperform, with 30-year ratios getting very close to their all-time lows reached earlier this year.”

Municipal to UST ratios closed at 62% in 10 years and 68% in 30 years on Friday, according to Refinitiv MMD and ICE Data Services.

As for technicals, demand remains quite strong despite poor valuations.

“If anything, higher yields might bring more investors to the municipal space, possibly improving appetite for tax-exempts even further,” the Barclays strategists noted.

Issuers are sitting on cash and in no hurry to tap the market aggressively, they said.

The total potential volume for the week of May 17 is estimated at $8.532 billion: $6.15 billion of negotiated deals and $2.381 billion scheduled for competitive sale.

Another week of larger state general obligation bond deals, led by Connecticut whose GO rating was boosted to A-plus on Thursday by S&P Global Ratings and AA-minus by Fitch Ratings on Friday. The state is set to price $700 million of exempts and $300 million of taxables.

Some issuers “might actually expect a resurrection of tax-exempt refundings, keeping their interest in placing new deals at bay,” Barclays said in its report.

It is especially true for healthcare, education, and state and local governments, while issuers in transportation, utility and housing sectors have been actually surpassing last year’s pace.

The muni market is rich and will likely remain fully valued for some time, they said.

“If Treasury yields continue to move up, while having some spillover effects into the muni space, to us it would be a buying opportunity, as tax-exempts will likely continue to do well for the time being,” according to Barclays.

Economic indicators
Despite a flat month in April, experts expect retail sales to improve with the continued economic reopening, although the numbers have been volatile, as stimulus payments were often quickly spent.

Given the payouts in March, “it is best to take a moving average of the monthly retail sales,” said Berenberg chief economist for the U.S., Americas and Asia Mickey Levy, because sales remain at a high level.

Retail sales were unchanged in April after an upwardly revised 10.7% jump in March, first reported as a 9.8% gain. Excluding autos sales fell 0.8% after a 9.0% surge.

Economists polled by IFR Markets predicted sales would increase 1.0%, with ex-autos up 0.9%.

The monthly retail sales change averaged 0.3% in the 10 years ending December 2019, they wrote in a report, never seeing an increase more than 2.2% or a decline larger than 2.0%. “Between last year’s lockdowns and a reopening surge in goods spending, this year’s stimulus checks and late winter storms, it’s no wonder why retailers are struggling to manage inventory and anticipate demand.”

Given the volatility, they said, their “outlook is not influenced one way or another by today’s report” since they expect a “surge in consumer spending tied to the reopening of the service sector.”

“Investors are starting to drink the Fed’s Kool-Aid that inflation will be transitory,” said Ed Moya, senior market analyst for the Americas at OANDA. Referring to the eight individuals associated with the New York Yankees who tested positive for COVID-19 despite having been vaccinated more than two weeks ago, he noted, “it is fascinating to see how less sensitive the U.S. is now to news of a fresh coronavirus outbreak.”

But, with only one of those individuals showing symptoms, “suggests the vaccines are working,” he said. “The U.S. is widely expected to have a very normal summer.”

Indeed, the Centers for Disease Control loosened mask restrictions for those who have been vaccinated, which “will lead to more consumer activity during the spring and summer months,” said Yelena Maleyev, economist at Grant Thornton.

Also released Friday, the University of Michigan consumer sentiment index slipped to 82.8 in the preliminary May read from 88.3 in April. The index stood at 73.2 in May 2020.

Economists estimated a reading of 90.3.

Economists expected prices to rise 0.6% for both imports and exports.

Elsewhere, industrial production climbed 0.7% in April, after an upwardly revised increase of 2.4%, first reported as a 1.4% rise.

Economists had expectations of a 1.1% increase.

Capacity utilization gained to 74.9% in April from an unrevised 74.4% in March.

Aaron Weitzman contributed to this report.