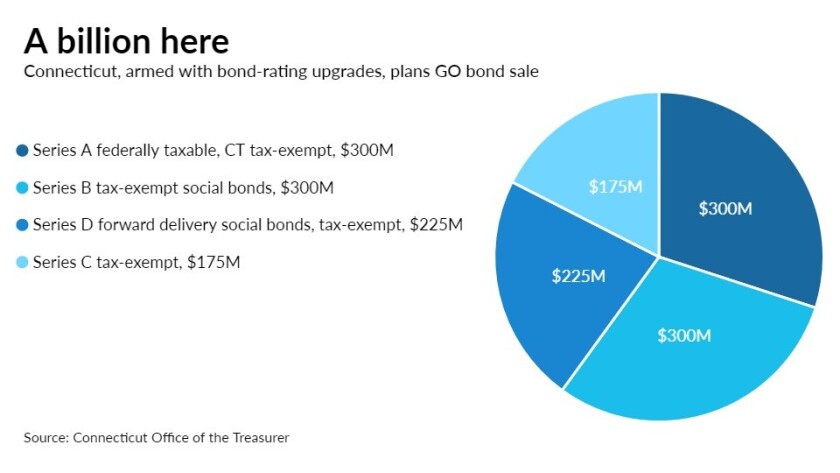 Moody’s Investors Service on March 31 upgraded the state’s GOs to Aa3 from A1. State Treasurer Shawn Wooden at the time said other upgrades could follow.

Wooden called the moves “a direct result of strong financial governance and early decisions we’ve made.” They represent the first upgrades to the state’s credit in 20 years.

“These upgrades by S&P Global, Kroll, Fitch and Moody’s are independent, third-party validations that our administration is putting Connecticut on the right track,” Governor Ned Lamont said. “For years, we’ve seen negative headlines about our finances and the state’s fiscal position, but this is even more proof that we are seeing sustained progress by addressing the sins of the past and investing in the future.”

S&P cited a debt profile that continues to moderate, based on a slower rate of tax-supported debt issuances, rapid amortization and “our opinion that a majority of debt metrics will remain below a level that previously resulted in a one-notch override that lowered our anchor rating.”

Wooden and state budget director Melissa McCaw met with S&P officials on May 10.

Their presentation highlighted the state’s improving economy and fiscal controls, and included a comparison of Connecticut’s reserves, liquidity, debt levels, pension funding, employment, housing market indicators, as well as other data to the region and other higher-rated states.

Wooden, treasurer since January 2019, said his office took steps to prepare for a potential economic downtown, which positioned the state to cope with the COVID-19 pandemic that escalated a year later.

“The markets were performing exceptionally well but I knew this wasn’t sustainable,” he said.

Tuesday’s one-day period for two of the tranches will precede the institutional sale, according to bond documents. The issuance features four series, including $300 million in taxables. About $600 million will support new projects and $400 million will refund existing bonds. UBS Financial Services and BofA Securities are senior managers,

“We think the state has positive credit momentum, … yet with spreads tightening by 10 points already this month, little room remains for further outperformance,” it said.

According to data on the Municipal Securities Rulemaking Board’s EMMA website, a block of Series 2017A taxable GOs maturing in 2026 with a 3.31% yield, sold to a customer Friday at a price of 109.06 cents.

Kroll, in its boost from AA-minus, cited the state’s “significant progress” in improving its financial position in the last three years, evidenced by its boost in the budget-reserve fund, the so-called rainy-day account, to roughly $3.1 billion from $213 million over three years.

CreditSights said Thursday that an upgrade by Fitch would lift Connecticut’s composite rating to AA3 from A1. It had been one of the lowest-rated states, “owing to its languorous economic growth and limited fiscal flexibility,” CreditSights added.

The state is in line for $2.6 billion under the American Rescue Plan, which President Biden signed in March. State officials last month projected a $250 million budget surplus, a vast improvement from its $880 million forecast in October.

Connecticut’s debt and pension liabilities are still large, with about 25% of state spending allocated to legacy costs. State debt includes $19 billion of GOs, after this week’s sale, and nearly $7 billion of special tax obligation bonds issued for transportation projects.

While weak economic growth over the last 10 years triggered credit difficulties, Connecticut has regained about 60% of the jobs lost during the pandemic, according to Fitch state tracking data.