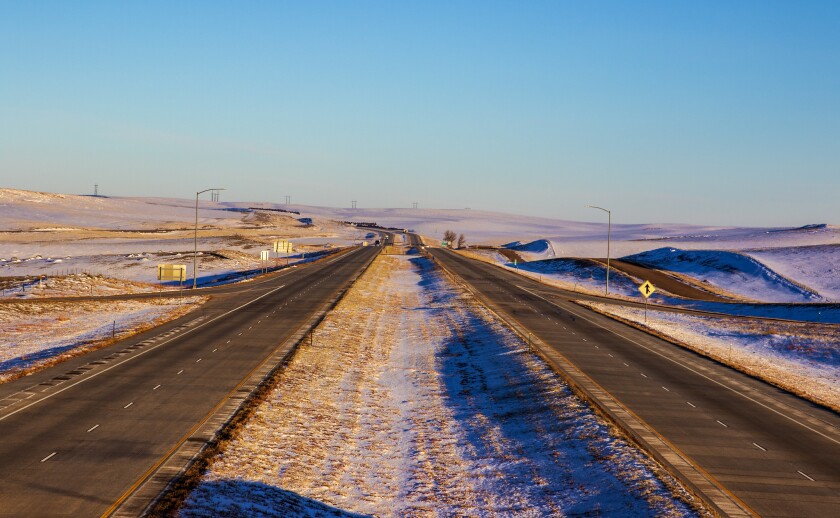 As Colorado lawmakers seek a long-term source of transportation funding, the Centennial State is issuing $500 million of certificates of participation for rural highway projects.

This week’s deal, scheduled to price Wednesday, is part of $2 billion authorized by the 2017 legislature under Senate Bill 17-267 for projects through fiscal 2022. The financing will go to the Colorado Department of Transportation, with the state Treasurer’s office handling the pricing of the COPs.

With investors drawn to strong credits, state officials expect heavy demand for the third tranche under this authorization.

“We’ve seen strong support from institutional investors in the past, in addition to retail interest, both in Colorado and across the country,” said Leah Marvin-Riley, spokeswoman for the Treasurer’s office. “Colorado’s economy has rebounded well from where we were even six months ago. S&P and Moody’s strong ratings reflect Colorado’s careful budgeting, as well as the strength of this issuance.”

Because the certificates rely on state appropriations, they carry ratings of Aa2 from Moody’s Investors Service and AA-minus from S&P Global Ratings, a notch lower than Colorado’s issuer credit ratings. Colorado’s constitution does not allow state general obligation bonds.

“In our view, the lease features and terms are standard, with no unusual risks regarding timely payment of debt,” said S&P analyst David Hitchcock.

The fixed-rate, tax-exempt certificates will mature in series through 2040.

The COPs are secured by lease payments in a sale-lease back of state buildings. Annual lease payments are to be made from the state’s general fund and the State Highway Fund.

One investor caveat involves 2018 litigation challenging the constitutionality of the legislation authorizing the certificates. The state district court ruled in the state’s favor, and state court of appeals dismissed the suit on the basis of plaintiffs’ standing. The Supreme Court has not announced whether it will take the case on appeal.

“The State is vigorously defending the suit and believes it has a reasonable possibility of favorable outcome in the plaintiffs claims,” officials wrote in an online roadshow presentation for the COPs.

Greenberg Traurig, the bond counsel, will deliver a litigation opinion in conjunction with the COPs expressing that in its opinion the state’s obligations are “valid, binding and enforceable,” according to the roadshow presentation.

“Given that this is the third tranche, we think investors are already familiar with the litigation, and as well, the strong rulings we’ve received from the district court and the Colorado Court of Appeals, so we don’t anticipate an impact,” said Marvin-Riley.

As the state continues its financing for projects under the 2017 legislation, the Colorado General Assembly is advancing bills under the heading “Sustainability of the Transportation System.”

The two key bills, Senate Bill 21-260 and SB21-265, are expected to clear the Senate on third reading for debate in the House.

Colorado Gov. Jared Polis and other state officials launched the bill that would raise $3.8 billion in fees over the next 11 years along with $1.5 billion in transfers from the general fund. A broad, statewide coalition of government and business leaders have announced support for the plan.

With the General Assembly scheduled to end by Memorial Day, time for passage tight. However, Democrats control both houses of the legislature and the governor’s office.

“Colorado has to be ready for the day when market-driven transitions lead car manufacturers to make all-electric vehicles fleets the norm,” said Rep. Matt Gray, D-Broomfield. “This bill reduces pollution and supports the adoption of electric vehicles by investing in the charging and fueling infrastructure needed to make owning one even easier than owning a gas or diesel vehicle. We’re going to invest in public transit and safe infrastructure.”

For the first two years, the legislation reduces vehicle registration fees. New fees, including increases for electric vehicles, will cost the average driver about $28 in the first year, officials estimate.

The bill would add 2 cents to the cost per gallon of fuel but would be classified as a “fee” instead of a “tax.” The 22-cents per gallon gas tax in Colorado has not been raised since 1990. The 2-cent fee would rise annually to a peak of 8-cents per gallon.

Ride-share services would see a 30-cent per trip fee, and a 15-cent-per-trip fee for car pools. The fee on delivery fees for online retail orders is 27 cents.

Under the 1992 Taxpayer Bill of Rights, a constitutional amendment known as TABOR, new taxes must be approved by voters. But the law exempts fees, which are considered voluntary payments for services.

The legislation is facing stiff opposition from the Colorado Chapter of Americans for Prosperity and is likely to face litigation if passed.

“As we have always said, we’re not going to stand back and allow lawmakers to continue to advance the gas tax against the will of the voters,” Jesse Mallory, state director of AFP, said in a statement. “It is unconscionable that our lawmakers could even think of moving forward with all the negative feedback they have received with only weeks left in the session to spare.”

The nonprofit TABOR Foundation’s litigation against SB17-267, the bill authorizing the COPs, is not directed at CDOT specifically but at a part of the bill that levied $4.5 billion in hospital fees that the foundation considers a tax.

“Some of these tactics include mortgaging state buildings, eliminating tax breaks, and trying to disguise tax increases as fees administered by ‘enterprises,’ state-run entities whose revenues do not count towards TABOR’s revenue cap,” the foundation said.

On March 5, 2019, the state District Court in Denver ruled in favor of the state, saying that the fees did not constitute a tax. The appeals court dismissed the lawsuit on the basis of standing of the plaintiffs.

Ratings analysts have long noted TABOR’s chokehold on revenues as a negative credit factor for the state.

S&P’s Hitchcock said that constitutional provisions such as the TABOR “limit state tax revenue, while at the same time mandating a minimum level of school expenditures, which we believe limits revenue and spending flexibility.”

Jason Simmons, managing director at Hilltop Securities, is financial advisor on the deal.