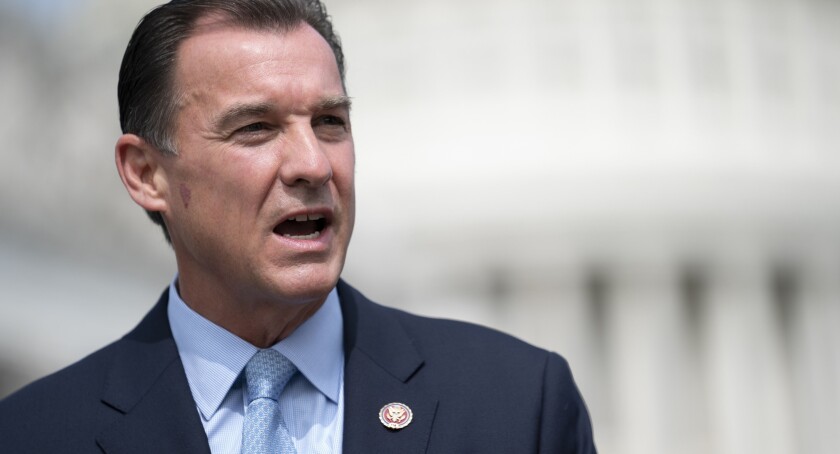 Three House Democrats say they won’t support any of President Joe Biden’s tax hikes to fund his infrastructure proposal unless the plan includes a repeal of the $10,000 cap on state and local tax deductions, making them just one vote shy of the number needed to block the president’s tax plan in the narrowly divided House.

“We say ‘No SALT, no deal.’ The GOP passed an unfair cap of $10,000 on state and local tax (SALT) deductions to pay for their 2017 tax giveaway,” Representatives Bill Pascrell and Josh Gottheimer of New Jersey and Tom Suozzi of New York said in a statement Tuesday. “Therefore, we will not accept any changes to the tax code that does not restore the SALT deduction and puts fairness back into the system.”

With 219 Democrats to 211 Republicans in the House, it only takes four Democrats defecting from their party and GOP members to stay united to stall legislation. Republicans have already signaled that they will not vote for the tax increases on corporations and individuals that Biden is expected to include in the infrastructure bill he is set to unveil Wednesday.

But Pascrell, Gottheimer and Suozzi will be under heavy pressure from the White House and House Speaker Nancy Pelosi to get behind a major Biden initiative that Democrats are counting on to help them defy historical trends and hold on to control of the House and Senate in the 2022 midterm election.

The three lawmakers say that the $10,000 limit on SALT tax write-offs, which was passed in former President Donald Trump’s 2017 tax law, has hurt residents of their districts, with high costs of living and high state and local levies, by removing a substantial deduction on their federal taxes.

Removing the cap, which would cost the federal government tax revenue, could become a key area of contention as Democrats seek to raise levies on corporations and the wealthy to pay for a bevy of infrastructure, health care and social programs.

In addition to costing $88.7 billion a year — revenue that some Democrats would like to direct elsewhere — doing away with the SALT cap is a politically difficult issue for some members of Congress, because more than half the benefits flow to households earning more than $1 million a year, according to the Joint Committee on Taxation.

However, the issue has support from key members of Congress and the Biden administration.

Treasury Secretary Janet Yellen told a congressional panel earlier this month that the SALT deduction limit causes “disparate treatment” among taxpayers and said she would work with lawmakers to resolve the issue.