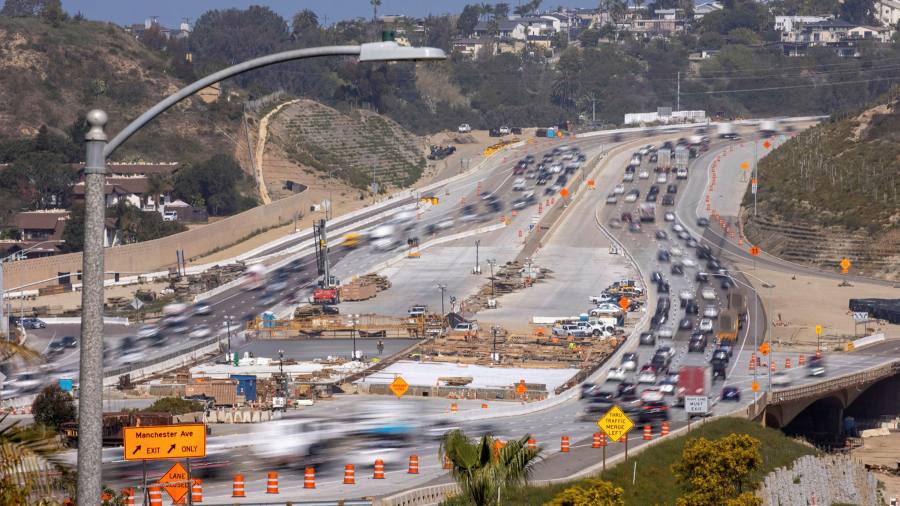 Joe Biden is proposing to plough $2tn in government spending into US infrastructure alongside $2tn in higher corporate taxes, in the first stage of a multitrillion-dollar effort to reshape the world’s largest economy.

The White House released details of the plan ahead of a speech by the US president in Pittsburgh on Wednesday, with administration officials calling it the biggest public investment programme since the creation of the interstate highway system and the Space Race of the 1960s.

Coming just weeks after Congress approved a $1.9tn fiscal stimulus plan to reboot the pandemic-ravaged US economy, Biden’s investment proposal will set the stage for weeks of delicate negotiations on Capitol Hill, where Democrats hold razor-thin majorities in both chambers.

If passed, it would represent a high-stakes bet by the White House that a lasting injection of government funds in critical areas, funded by higher corporate taxes, will strengthen the economy as it emerges from the coronavirus crisis, rather than weaken it as Republicans are already charging.

One Biden administration official said the plan was an “important moment to demonstrate that the United States and democracies can deliver for the people”, arguing that it would “revitalise our national imagination” and put “millions of Americans to work right now”.

The plan sets aside up to $621bn in funding for traditional infrastructure upgrades, including roads, bridges, public transportation networks and vital hubs such as ports and airports.

But it will also try to direct the spending towards projects to help the US mitigate the climate crisis, which the Biden administration has vowed to tackle head-on, in a big shift from the scepticism of former president Donald Trump.

These proposals include $100bn in measures to modernise the electricity grid, provide tax credits for clean energy generation and storage and plug orphan oil and gas wells — as well as $213bn to make homes more energy-efficient and $100bn to do the same for public schools.

Meanwhile, $180bn of funds will be directed towards investments in research and development in areas such as artificial intelligence and biotechnology, squarely aimed at improving competitiveness with China. A further $300bn in government spending is to be devoted to manufacturing subsidies, including help for chipmakers.

While supporters of Biden’s plan have already argued that it will address decades of chronic under-investment in public goods that has hurt the economy, critics were concerned that the corporate tax increases could be harmful to US competitiveness.

Biden wants to raise the corporate tax rate from 21 per cent to 28 per cent, and muster additional revenue through a 21 per cent global minimum tax, calculated on a country-by-country basis “so it hits profits in tax havens”, according to the White House. The president also wants to scrap an exemption from taxes for companies on the first 10 per cent of earnings produced internationally and end tax preferences for fossil fuel producers. Even before Biden released his plan, the Business Roundtable, which represents the biggest blue-chip companies in Washington, attacked the tax increases in the plan.

Biden’s spending proposal is expected to last about eight years, whereas the corporate tax increases are expected to be phased in over fifteen years, beyond the US government’s traditional 10-year budget window, implying the plan would add to America’s deficits over that period of time.

Despite the high price tag of Biden’s infrastructure package, the White House is expected in the coming weeks to complete its investment plan with an additional set of spending measures on “childcare, healthcare [and] education” that is likely to top $1tn, bringing the total amount to more than $3tn. The second package is expected to be paired with tax increases on wealthy individuals, including on their income, capital gains and estates.

As he prepares to begin the negotiations with Congress on both packages, Biden is already facing competing pressures within his party. Alexandria Ocasio-Cortez, the New York Democratic lawmaker, has said the $2tn infrastructure plan was “not nearly enough” and argued for more. But other Democrats are worried that the spending and tax rises could be excessive, with some even calling for a repeal of a cap on deductions for state and local tax payments, which would amount to a tax cut.