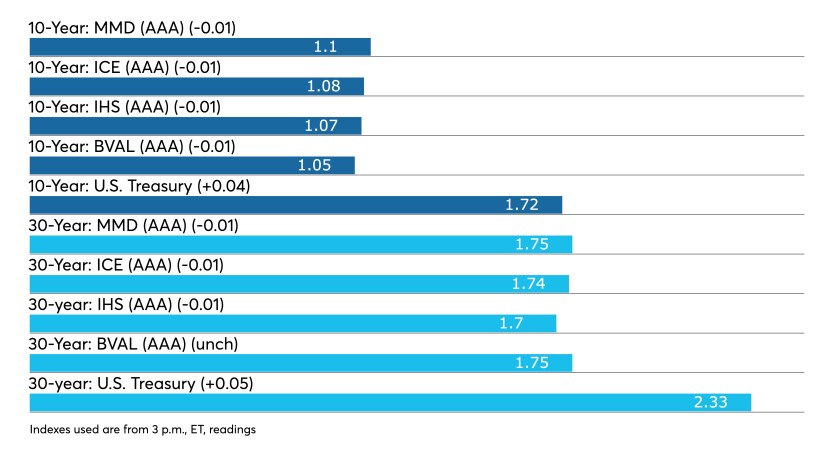 Municipal secondary trading was quiet but a firmer tone emerged on Monday as both the holiday-shortened week and the approaching end of the first quarter made for a steady market.

“It’s a very light calendar this week because of the holiday,” a New York trader said on Monday looking ahead at the upcoming Good Friday and Easter holiday.

Just a little over $3 billion is on tap, led by the $995 million Golden State Tobacco Securitization Corporation taxable offering, before the market takes its holiday hiatus.

Municipals were steady Monday from 2022 to 2025, and were bumped as much as one basis point between 2026 and 2051 near the close of trading, after being unchanged across the board between 2022 and 2051 on Friday, according to triple-A benchmark data providers.

“Although the muni to Treasury percentages aren’t great, it’s an improving situation with credit quality because of the stimulus package giving more money to state and local governments and schools,” the trader said.

Rating agencies continue to recognize the beginning of the end of the pandemic on economic growth and fiscal stimulus by changing outlooks on select individual credits and entire sectors, Peter Block, managing director of credit strategy at Ramirez & Co. said in a weekly report Monday.

The market will take a pause from the significantly sized, billion-dollar deals it’s seen of late.

The total potential volume for the week is estimated at $3.3 billion, , which is down from total sales of $8.5 billion million last week.. Total 30-day visible supply sits at $10.18 billion with $4.420 billion of competitive deals and $5.763 billion of negotiated on the calendar.

“We are stronger for the day and in good shape,” the trader said, noting that any new issues will be smaller, local deals and will begin pricing on Tuesday and wrap up Thursday as the market is closed for Good Friday.

“We have gone through a lot of deals and all new issues have done well,” he said.

He pointed to last week’s New York Transitional Finance Authority and Triborough Bridge and Tunnel Authority deals, which were both hallmark names with good track records that were attractively priced.

“The Trib deal was a blowout,” he said. “There may be a test with new credits that are a little shaky, but if it’s a large new-issue, they want it and they all do well,” the trader said.

The issue was made up of $1 billion of tax-exempt, fixed-rate bonds priced by Ramirez & Co. and $228 million of taxable fixed-rates sold competitively.

While the new-issue market remains strong overall, demand in the secondary market is imbalanced, according to the New York trader.

The front end of the secondary market remains extremely rich, which is psychologically challenging for investors, he noted.

While they are eager to earn the maximum yields on the long end of the curve, the short end remains tough to swallow, he said.

Quarter end and rate refusal
As the end of the first quarter arrives on Wednesday, the market will look for two key announcements this week, one being an announcement from President Biden on an infrastructure plan, Block of Ramirez pointed out.

The market also anticipates the economic data release on Friday for both March non-farm payrolls, which is expected at more than 635,000 jobs and a 6% unemployment rate.

Economy
The economy is positioned to improve quickly, as vaccinations increase, so to willthe reopening of servicesand demand for goods, according to the latest results of the Dallas Fed regional survey. The progress seen regionally should translate to positive impacts for the economy as a whole, according to analysts.

Texas factory activity, as measured by the production index, “expanded at a markedly faster pace in March,” according to the monthly Texas Manufacturing Outlook Survey conducted by the Federal Reserve Bank of Dallas, released on Monday.

“The survey shed light on many of the drivers of economic activity such as the labor market, as factories are hiring and increasing hours worked,” said KC Mathews, executive vice president and chief investment officer at UMB Bank. “This should dovetail into lower unemployment, more disposable income and more consumption.”

The six-months ahead future outlook index for business activity slipped to 33.7 from 33.9 and the future company outlook index fell to 26.2 from 32.3.

“The Texas factory sector appears poised to accelerate further as more and more Texans are vaccinated and demand for goods rises with widespread reopening of services,” according to Scott McIntyre, senior portfolio manager and managing director at Hilltop Securities Asset Management.

“The production index jumped to the highest level in the 17-year history of the series,” McIntyre said.

The outlook uncertainty index dropped to 5.5 from 8.5.

“The survey shows a very strong recovery as some of their indicators are hitting all-time highs,” said Aleksandar Tomic, associate dean and program director of MS in applied economics at Boston College.

“The capacity utilization index is particularly interesting as it is one of those indicators that are showing an all-time maximum and points to the continued strain on the supply chain that has been mentioned in recent stories surrounding the Suez Canal situation,” he said “In short, capacity is being used up all along the supply chain, and strong demand is putting a stress on it.”

“On the inflation front, supply chain disruptions continued to put upward pressure on prices as the raw materials index jumped, while the finished goods index climbed from to a three-year high,” McIntyre said. “Employment conditions [also] brightened considerably in March more than doubling and the outlook index is also the highest in three years.”

According to Robert Johnson, CEO and chair at Economic Index Associates as well as a professor of finance, at the Heider College of Business at Creighton University, the survey indicates that “the economy is rapidly improving,” as the economy recovers from Covid-19 related shutdowns and slowdowns.

He noted the report makes a “strong case” that the U.S. could be seeing the “start of the highly anticipated Roaring Twenties.”

“In fact, the production index and capacity utilization indexes both reached all-time highs,” Johnson said. “While the numbers all point to a rapidly improving economy, price and wage pressures are both rising, furthering inflationary concerns.”

Mathews thinks short-term inflation concerns are “transitory,” and being caused by supply disruptions and increases in raw material prices.

“As the global economy reopens, supply chains and inventories should normalize keeping short-term inflation in check,” he said.

“Data supporting the conclusion that inflation concerns are transitory, is in the Dallas Fed Manufacturing ‘six month ahead’ outlook survey,” Mathews said. “In March, fewer business owners think prices for finished goods, six months from now, will be on the rise. In addition, the outlook for increasing wages and benefits, a key sustainable driver of inflation, may have plateaued.”

2021 could be a ‘buy the dips’ year
With the recent COVID relief bill, and the Fed’s foot still firmly planted on the monetary stimulus gas, inflation fears and rising bond yields have become the hot topic.

This has been compounded by ever-more encouraging data on the effectiveness of the vaccines that have already been distributed worldwide, making investors increasingly confident that much more “normal” consumer spending patterns could resume as early as the summer.

“It is unlikely for a few reasons, first, the rise in money supply is not as overwhelming as it might first appear,” Khanna said. “And employment trends mean the output gap will probably take around two years to close.”

He added that many of the long-term disinflationary trends the economy has been facing for years have only been exacerbated by the pandemic.

“So, even if inflation pressures were to build, the Fed has been effective at keeping inflation low (even if it has struggled, lately, to stimulate inflation when it has been too low),” he said. “Bond yields could potentially sell off intermittently, but with plenty of cash waiting on the sidelines and U.S. rates looking attractive to international buyers, it could be the year of the opportunists.”

The Board of Trustees of the University of Arkansas (Aa2///) is set to price $138.9 million of UAMS Campus various facilities taxable and tax-exempt revenue bonds on Wednesday. $96.61 million exempt, $42.38 taxable. BofA Securities is bookrunner.

In the competitive markets, Palm Springs USD, California is set to sell $118 million of general obligation bonds at noon eastern on Tuesday.

Tesla, Amazon, Meta, Carvana, Silvergate Capital: Why These 5 Stocks Are Drawing Investors ‘Attention Today’
How the spy balloon popped a US-China rapprochement
January job growth is forecast to slow slightly, but the impact from big corporate layoffs is uncertain
Munis outperform UST rout after hotter-than-expected jobs report
Abortion Pills Will Be the Next Battle in the 2024 Election