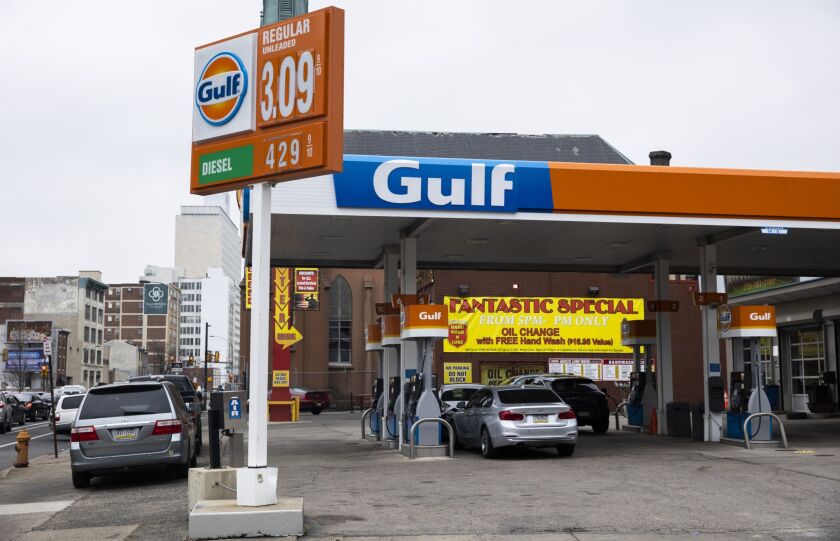 Gov. Tom Wolf wants to put Pennsylvania ahead of a national curve by phasing out the gas tax as a funding source.

According to Wolf, the commonwealth has more than $9 billion in annual unmet needs across the state-maintained transportation system alone.

“At the same time, Pennsylvania is relying too much on outdated, unreliable funding methods, and the federal government hasn’t taken meaningful action in decades,” he said.

The panel includes tops lawmakers from both branches; Mark Compton, chief executive of the Pennsylvania Turnpike Commission; and transit and trucking advocates.

No state has phased out the gas tax as a primary source, according to the Washington-based think tank Tax Foundation. To do so, the commonwealth would have to find new revenue, no small task.

Wolf’s proposal comes as President Biden prepares to line up for Congress a wide-ranging infrastructure bill of up to $3 trillion.

“It would be refreshing to see Pennsylvania on the cutting edge of anything,” municipal bond analyst Joseph Krist said. “It’s an interesting counterpoint to moves in other states to raise their gas taxes. It’s clear that the taxation of gasoline at the pump is an outdated concept.”

Vehicle mileage taxes could be the next wave, Krist said.

“It’s troublesome that a really simple concept like a VMT gets caught up in so many other issues — privacy and vehicle tracking,” Krist said. “No one wants to focus public attention on how much surveillance of private vehicles goes on right now. It would render the whole issue moot.”

According to Krist, odometer readings could happen at yearly inspections or by installing an on-board-unit that electronically transmits VMT to a central computer. The Tax Foundation estimates that a VMT, assuming a flat rate, need to be levied at 8 cents per mile to raise $8.4 billion. That would amount to 56% of the commonwealth’s estimated annual revenue requirement to cover transportation funding.

VMT, Krist added, would be independent of technological change. “Who cares what fuel you use?”

“This is an opportunity, a time when we may be able to move on those measures,” he said on a Bond Buyer video. “And the whole VMT issue becomes very important because your electric vehicles, they aren’t using gasoline so it’s hard to tax them and to bring them into the arena of supporting, if you will, the infrastructure investment through gasoline taxes.

State revenue overall from gas taxes are stagnating and some states have been experimenting more with user fees. Some have piloted VMT programs — in Oregon it’s optional for everyone — but none have taken the leap to making it the primary transportation tax.

Pennsylvania’s gas tax is the second-highest nationally at 58.7 cents per gallon, only behind California.

To raise about $2 billion over the next few years, Pennsylvania’s Department of Transportation is seeking to add tolls on nine major bridges on interstates. The matter has become a political football in a state with a Democratic governor and a Republican-dominated legislature.

“Tolling has just too much opposition and the effort to use the Turnpike as a funding source has been bad for that credit,” Krist said.

The 552-mile Turnpike system runs from New Jersey to Ohio and includes interstates 95, 76, 276 and 70. It converted to all-electronic tolling in March 2020, shortly after the pandemic escalated.

The Turnpike Commission plans to issue roughly $250 million of Series 2021A Turnpike revenue bonds on Tuesday, according to a preliminary official statement. PNC is lead manager.

Past mistakes continue to haunt Pennsylvania. A 2007 law, Act 44, has siphoned roughly $7 billion from Turnpike tolls each year and plunged the Pennsylvania Turnpike Commission deeper into debt. The law assumed federal signoff of tolling for east-west Interstate 80, but Washington nixed the request, saying the bulk of the revenue would have been off-system.

The Turnpike Commission still had to make annual payments of roughly $450 million to PennDOT. A 2013 law revised the funding obligation and required PTC to pay PennDOT $450 million annually through fiscal 2022.

Such missteps have triggered Pennsylvanians’ skepticism about government. A poll that Lancaster-based Franklin & Marshall College’s Center for Opinion Research released on March 11 showed that only 36% of the state’s voters believe Pennsylvania is headed in the right direction, much lower than the pre-pandemic high of 57% reported in October 2019.

Voters cited COVID-19 (31%) as the most important problem, followed by concerns about government and politicians (27%) and the economy (12%), including unemployment, personal finances and business retention, follow as top concerns.

Pennsylvania has one of the largest state-owned transportation networks in the country, with nearly 40,000 miles of roads and over 25,400 bridges under its direct purview. PennDOT also oversees aviation, rail freight, public transportation, ports, pedestrian and bicycle programs.

The American Society of Civil Engineers, in its 2021 report card on U.S. infrastructure, rated the nation’s infrastructure C-minus — up from its previous D-plus but still below average. Its most recent grade for Pennsylvania, in 2018, is also C-minus.

“Overall, Pennsylvania’s infrastructure is in mediocre condition,” said the report, which implored the commonwealth to innovate. “ASCE recommends lawmakers fund research, development and deployment of new ideas. Moreover, private industry should have a seat at the table to help identify new technologies and we should continue to foster collaboration.”