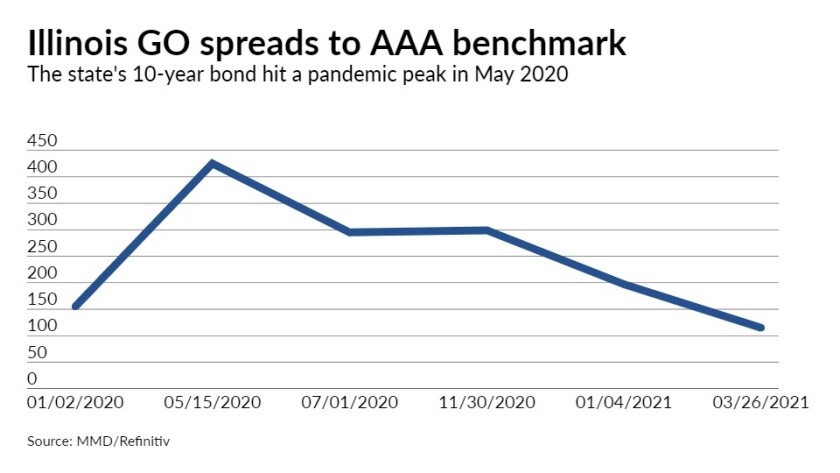 Two recent lifts to Illinois rating outlooks cast a more favorable light on its bonds but whether the momentum leads to upgrades hinge on the state showing fiscal discipline as it finalizes a new budget and spends federal cash, market participants said.

The outlook revision reflects “the state’s financial performance through the pandemic, in combination with increased levels of federal support that will moderate near-term fiscal and economic pressure,” Moody’s said.

Fitch Ratings also assigns Illinois its lowest investment grade rating. All agencies shifted their outlooks to negative from stable in 2020 as the COVID-19-pandemic socked state revenue projections. Fitch also lowered the rating one notch at the same time.

The market will be closely scrutinize state economic performance and how Gov. J.B. Pritzker and lawmakers spend down the federal funds that will flow in two tranches, one this year and the other next year.

“If the state uses its stimulus funds wisely and the economy grows as strongly as expected, a state upgrade is possible by next year,” said John Ceffalio, senior municipal research analyst at CreditSights Inc. “The fiscal 2022 budget is crucial. Investors and ratings agencies will be looking for the state to put itself on a sustainable footing, pay down debts and payables, and not to spend the one-time money on ongoing commitments.”

“They’ve moved off the precipice of junk because of all this federal money and they’ve gotten a reprieve from dealing with some difficult issues,” Cure said. “The big question is whether they make some tough decisions to structurally balance their budget. They can’t expand their programs on a long-term basis without figuring out how to pay” for them in the absence of federal dollars, “and pensions will be hanging over their heads” with a $141 billion unfunded tab.

Pritzker has not outlined spending plans for the relief funds but said he would first pay down nearly $3 billion still owed to the Federal Reserve from $4.2 billion borrowed through its Municipal Liquidity Facility and then would pay off a portion of the state’s bill backlog that stood at $4.8 billion Friday.

State Comptroller Susana Mendoza has backed up that position and sought to tamp down legislative talk on new spending.

“Illinois still has a long way to go, but these two changes in outlook signal to investors that Illinois is heading in a better direction,” Mendoza said. “The ratings agencies make clear that Illinois using its funds from the American Rescue Plan to pay down debt is the most responsible path forward for the state’s finances and the best way for the state to achieve an upgrade in its ratings.”

Cure expects the state to face legislative pressure to spend the funds elsewhere and so the market can’t be sure of the administration’s assurances until the dollars are in hand and earmarked.

Moody’s and S&P also both lay out what’s needed for upgrade. Moody’s cites paying down the bill backlog, moving toward structural balance and pension plan action as factors that could drive an upgrade. The outlook period covers the next 12-24 months.

“If Illinois were to make sustainable progress toward structural balance, including meeting its pension obligations, further reducing its bill backlog, and increasing reserves, we could raise the rating,” S&P said in its report ahead of the state’s $1.25 billion sale earlier this month.

“Enactment of the ARP, followed by a clear dedication of the state to using new federal aid to unwind one-time budgetary measures taken over the past year and restore fiscal resilience, would support stabilization of the outlook and potentially upward rating movement toward its pre-pandemic level,” Fitch said recently.

Backpedaling on structural balance or actions that add to the pension burden could drive downgrades.

Illinois bond prices were up in some observed trades after Moody’s lifted its outlook including a 25-year bond that narrowed to a 109 basis point spread from 121 bps and a 11-year bond that traded at a 113 bp spread compared to a prior spread of 125 bps, said Edward Lee at IHSMarkit.

“The market seemed to anticipate positive actions from the rating agency prior to the announcement,” Berger said. The outlook changes appear “baked into the cake.”

Investors made their own calculations March 16, when Illinois priced $1.26 billion of general obligation bonds at the lowest spreads to triple-A benchmarks since 2014. The state benefited from both strong marketwide demand from higher yielding paper and its improved fiscal prospects

The state’s 10-year was trading around a 125 basis point spread to the Municipal Market Data’s AAA benchmark. The 10-year settled at 120 bps. MMD moved the spread to 120 the next day and as prices rose in secondary trading by last Friday state bonds seven years and out were set at a 115 bp spread.

The outlook changes and sharp narrowing of spreads mark a dramatic turn from last fall when wide spreads reflected worries over the pandemic’s impact and many saw the loss of Pritzker’s signature fiscal proposal — a shift to a progressive income tax structure from the current flat one — on the November ballot as threatening a cut to junk.